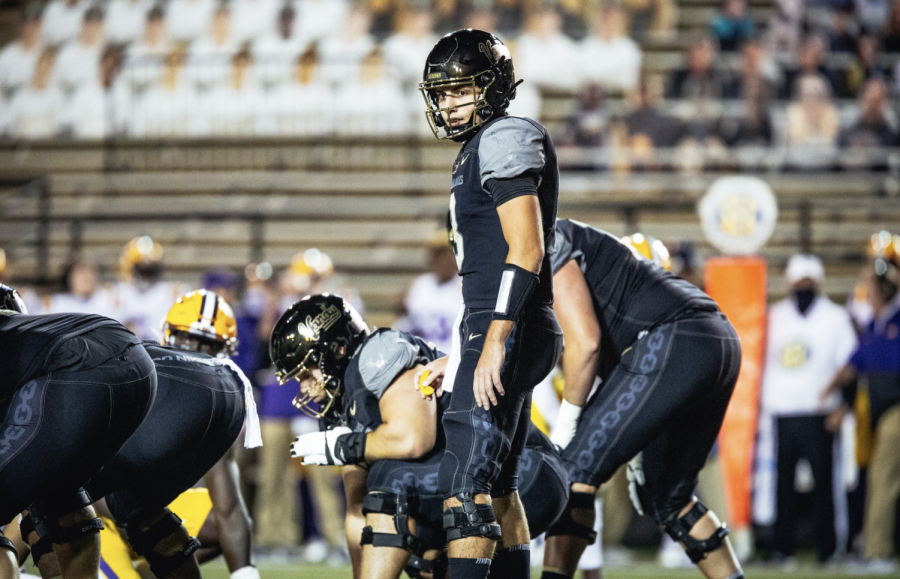 The Vanderbilt football team returned to practice on Wednesday with many missing scholarship players, days after their matchup against Missouri was canceled.

“We got back on the practice field today with this team for about 75 minutes,” head football coach Derek Mason said in a press conference this morning. “Again, looking at the team, it’s a shell of a football team right now when you look at the guys who are out and where we are at.”

The team also had positive cases on Aug. 20 and Sept. 2, making this the third known stoppage of practice due to positive COVID-19 cases.

Mason estimated that the number of scholarship players currently able to practice is somewhere in the “high 40s” due to numerous positive COVID-19 cases, people in quarantine due to contact tracing and injuries. He also estimated that the team has had about 10 players opt out of the season.

Vanderbilt played its last game against South Carolina on Oct. 10 with only 56 scholarship players available, just three more than the SEC requirement of a minimum of 53 active scholarship players. The Commodores were without leading rusher Ja’Veon Marlow as well as their top two leading tacklers, Dashaun Jerkins and Donovon Kaufman. In a since-deleted tweet the night before the game, Kaufman revealed that he had tested positive for the coronavirus.

Mason revealed that the lack of scholarship players is predominantly a result of contract tracing rather than positive tests.

“I don’t know what the exact number [of cases] is because again we just tested, [had] contact tracing, he said.” “I can’t even tell you what the exact number is. I know we haven’t had high numbers of breakouts but the reality is anytime you have any it goes back to who do you live with, who’s your roommate the night before the game.”

Mason thinks that the team’s outbreak is mostly contained. The only issue, he says, is getting student-athletes back on the field as quickly and safely as possible.

Players released from isolation after the ten-day isolation period must undergo PCR testing, cardiac screening and a cardiac MRI in order to be cleared to return to play. The total process could result in players missing two or three weeks of play depending on when the player receives the positive test results.

“Here’s the thing: once your numbers get down and you’re still practicing, you’re putting more practice reps on somebody,” Mason said. “So when you lose players in practice, it puts more stress on the guys that have to practice, especially after coming off games.”

Mason also noted that a couple of assistant coaches have tested positive or been contact traced, but it has not affected the team’s leadership strategy.

“We had a plan in place when we first started this and it was about making sure we had last-man-standing protocols,” he said. “From our graduate assistants to our quality control coaches, that’s why you have these people on your staff.”

Vanderbilt’s game against Missouri will not be the only SEC game postponed this weekend, as the SEC announced today that Florida and LSU’s game will also have to be played at a later date due to numerous positive cases within Florida’s program.

The Commodores will also be off next weekend because of a scheduled bye week. They will next play on Oct. 31, when they host Ole Miss.