A chaotic few weeks in the Southeastern Conference has made it increasingly difficult to rank anyone—that is, anyone except for Alabama and Vanderbilt. 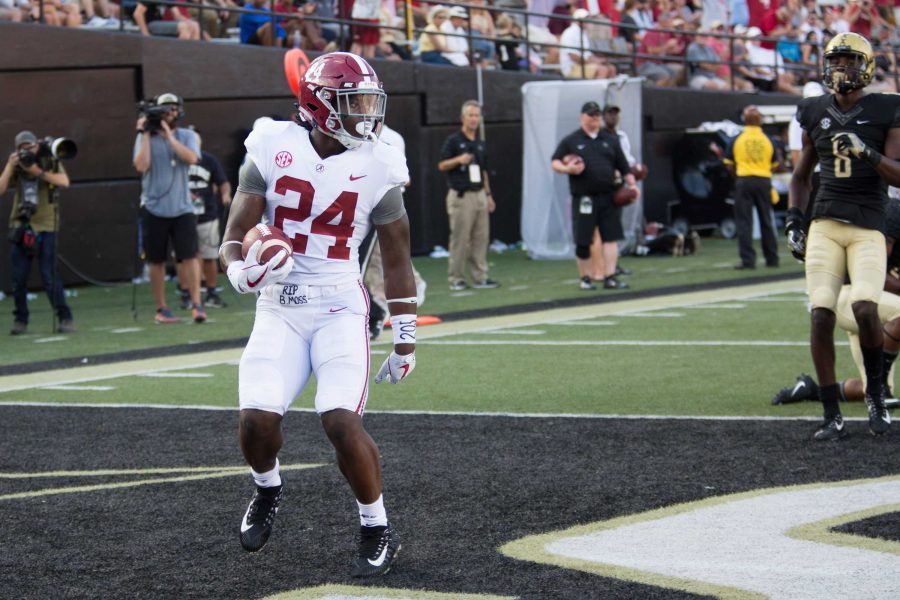 The nature of a conference-only schedule is beginning to take hold in the Southeastern Conference (SEC), with massive upsets, close games and unpredictability brewing. . It seems like every power ranking through  the first two weeks can be thrown out, as every team in the conference aside from Alabama, Georgia and Vanderbilt has at least one win and one loss. Florida lost to Texas A&M fresh off a blowout loss at Alabama; Auburn barely survived Arkansas at home (welcome to 2020); Mississippi State and LSU might not be the powerhouses many expected and Ole Miss is shooting up the rankings—despite having given up 156 points through three games. Given the events of this past week, it appears that we are heading towards a chaotic next few weeks in the SEC. The only given: Alabama comes in at first and Vanderbilt at last.

Finding a familiar spot atop the power rankings, the Alabama Crimson Tide continue to roll. Improving to 3-0 behind an offensive explosion led by running back Najee Harris and his five touchdowns, the Crimson Tide took down Ole Miss 63-48 in one of the most memorable games so far this season. Junior quarterback Mac Jones also turned out a classic performance, showcasing his  blistering accuracy with  28 completions on 32 attempts for 417 yards and two touchdowns.

Nick Saban will not be pleased that his defense let up 48 points, but he has been proven to make defensive adjustments before, and there is no reason to expect he won’t be able to do that again. Saban is leading yet another powerhouse squad that looks to extend its undefeated streak to four as they take on Georgia, in what some are calling the game of this year, this upcoming week. With one of the most balanced teams in college football and three convincing wins to start the season, Alabama seems to be transitioning fine to the post-Tua era, claiming the top  spot in this week’s power rankings.

Former walk-on and fourth-stringer Stetson Bennett has come out of nowhere to right the ship for the Bulldogs, as the quarterback helped Georgia  improve to 3-0 with a 44-21 win over Tennessee. It’s been a revolving door under center for Georgia as presumed starter Jamie Newman opted out in the preseason and backups D’Wan Mathis (benched) and JT Daniel (injured) are not ready for Head Coach Kirby Smart. With one of the best defenses in the conference—perhaps the country— all the Bulldogs need is a game manager at quarterback, and in Bennett they’ve found just that. Bennett has led the Georgia offense to its second come-from-behind win in three weeks. The Bulldog defense has allowed just 37 points through three games and will look to carry that success into the matchup of the year at Alabama this weekend.

Despite the last-second field goal that led to the heartbreaking loss to Texas A&M this past weekend, Florida continues to be a very impressive football team. After six touchdowns in Week One and four in Week Two, senior quarterback Kyle Trask threw four more touchdown passes in Week Three. The Trask-Kyle Pitts connection has resulted in seven touchdown passes in three weeks, and they don’t look to be slowing down. However, after a questionable defensive performance in the second half against South Carolina and yet another questionable defensive effort against Texas A&M, there needs to be some defensive adjustments made if this Gators team wants to get higher on this list. With a tough stretch of games coming up, playing LSU and Georgia in the next three weeks, we will soon be able to see what this Gators team has to offer.

Through two weeks, Texas A&M did not look the part of a preseason top-ten team. They opened the season by letting Vanderbilt hang around in a sloppy contest  in College Station , a game in which they claimed just a five-point win over the Commodores. In Week Two, they were dismantled at Alabama 52-24. It seemed that, once again, Kellen Mond and co. would be unable to live up to lofty preseason expectations. Then Week 3 happened. Mond led the Aggies to an impressive statement win over the Florida Gators, who had looked like a clear top-2 team in the SEC through two weeks. The road gets easier from here for Jimbo Fisher’s crew, as the Aggies will face Mississippi State, Arkansas and South Carolina over the next three weeks.

Ole Miss gave Alabama a serious run for their money (63-48 loss), and in a week where some of the so-called “top teams” in the SEC were thoroughly unimpressive (looking at you Florida, Auburn, and LSU), that’s enough to give the Rebels a serious boost in the rankings. Lane Kiffin’s offense put up 647 yards on the usually stout Crimson Tide defense, the most allowed by Alabama during the Nick Saban era. Second-year quarterback Matt Corral, who went 21-28 for 365 yards and 2 TDs, has emerged as a leader for this Rebel offense that has been one of the best in the league so far. Wideout Kenny Yeboah continues to have a standout season, as he added two more touchdowns Saturday to bring his season total to four. Ole Miss heads to Fayetteville next week to play the Arkansas Razorbacks, a game that they should win handedly.

After a hard fought 30-28 win over the Razorbacks, Auburn can go into Week Four with their heads held high. Following being blown out 27-6 by Georgia and having their rushing attack held to just 39 yards in Week Two , the 260 rushing yards coming from this offense was a welcome sight against Arkansas. Looking at how Bo Nix’s numbers haven’t been anything spectacular so far this year, getting Bigsby and the rest of the backfield going is the key for this team. With a relatively easy schedule coming up for the Tigers, aside from matchups against LSU and Alabama in Week Six and Week Nine respectively, it will be interesting to see what kind of momentum this team can create.

LSU has had a disappointing start to the season, as the reigning champs have fallen to 1-2 after a 45-41 loss to Missouri. The offense has been producing in typical LSU fashion, as they are averaging 43.3 points per game. However, this year’s defense has been bad, giving up 44 points to Mississippi State and 45 to Missouri, two teams that are not exactly powerhouses in the division. Coach Ed Orgeron (O)  has some serious adjustments to make if LSU wants to have another successful season. The team plays Alabama, Auburn and Florida in three of their next four games, and these could provide insight on the kind of team LSU is this year. If this team can’t piece together an impressive run soon, this season is looking like an off-year for the Tigers and Coach Orgeron.

After starting the season with an impressive 2-0 run, the 2020 Tennessee Volunteers returned to earth, much to the pleasure of Vanderbilt fans. The  Volunteers got clobbered this weekend in Athens, 44-21 at the hands of the Georgia Bulldogs. Quarterback Jarrett Guarantono turned it over four times, and the Bulldogs scored 24 straight in the second half, leaving the Volunteers with more questions than answers heading into Week Four. Can Guarantono be consistent? Is this defense good enough to stop the best-of-the-best in the SEC? Tennessee will have a litmus test this week against Kentucky before welcoming Alabama to town in Week Six.

The Razorbacks started the 2020 season 1-2 after a hard-fought game against Auburn in Week Three that resulted in them falling 30-28 to the Tigers. Feleipe Franks was impressive in this game, throwing for over 300 yards and four touchdowns without an interception. While the quarterback play on this team has been pretty good, the rushing game has left a bit to be desired. However, with a relatively strong defense, a well-rounded passing attack on offense and a gritty spirit, the Arkansas Razorbacks—and first-year head coach Sam Pittman—often have a chance to pull off an upset making them a fun team to watch.

The Wildcats got their first win of the season in a drubbing of the Mississippi State Bulldogs, 24-2. Kentucky’s defense forced Mississippi State into six turnovers and held the offense scoreless. The defensive performance was a welcome sight for Kentucky fans with the Wildcats fresh off a 42-41 loss to Ole Miss. Running the ball continues to be the calling card for Mark Stoops’ team, but the Wildcats will need to improve their efficiency to help the defense out—they rushed for just 84 yards on 32 attempts Saturday. If they can figure out how to open up the run game a bit more, this will be another pesky Kentucky team predicated on strong defense and ball control. They head to Knoxville this week to take on Tennessee as they look to make it two in a row.

After starting the season 0-2 with losses against Alabama and Tennessee, the Tigers picked up their first win of the season with an impressive performance against LSU in Week Three. With great performances from both Connor Bazelak and Larry Rountree III, this was a game that can help grow this team’s confidence going forward. With their next game scheduled against Vanderbilt, the only winless team left in the division, Week Four presented a good chance for the team to capitalize on this momentum and build a foundation for the remainder of the season. However, the outbreak of COVID-19 in the Commodore locker room caused this game to be postponed with a tentative date set for Dec. 12. Regardless, the Missouri Tigers have discovered potential in their football program for the first time in years, and this could turn out to be a good season for them if they continue to play up to their ceiling.

Yes, South Carolina got their first win of the season. No, they do not deserve to move up in the power rankings because of it. The Gamecocks thumped Vanderbilt in Nashville onSaturday, 41-7, in the rain. But this one was as much about Vanderbilt’s shortcomings as it was South Carolina’s success. To their credit (as Derek Mason would say), South Carolina amassed 485 yards on offense, 289 of those on the ground. Tight end Nathan Muse had five catches for 85 yards through the air as well. The Gamecocks will face a challenge this weekend at home vs. Bo Nix and Auburn.

Since starting the season strong with a win over LSU, the Mississippi State Bulldogs have dropped 2 straight games, with this most recent loss coming in extremely embarrassing fashion. In their 24-2 loss to Kentucky, the team mustered a disgraceful 20 yards total rushing. To make matters worse, the Bulldog quarterbacks threw six—yes, six—interceptions. While some may have believed in this team after the Week One win, if these past couple games are any indication, that confidence was misplaced. The Mississippi State Bulldogs are looking like they are going to have another unsuccessful year, which is why they land at 13 in the power rankings for this week.

Despite the collective hopes of The Hustler staff up until this point, it’s finally time to put the Commodores at the bottom of the power rankings. Yes, Vanderbilt was missing swaths of players due to COVID-19 contact tracing. Yes, there were moments of brightness during the Commodores 41-7 loss. But this one was ugly Saturday, and it’s time for Derek Mason and co. to figure it out, and quickly. Right now, despite an improved offense (can it get worse than last year?), Vanderbilt cannot put points on the board (by touchdown or field goal), and this defense is not good enough to get zero help. Hopefully, the Commodores get the 20-something players back active—after the Week Four game against Missouri was postponed, they’ll have until Oct. 31 to recharge. They’ll need the time off, as their next game, a home contest against Lane Kiffin’s Ole Miss Rebels, will certainly prove a tough matchup.