In a match filled with controversy and excitement, a referee’s whistle decided the outcome of a close outing between the Commodores and the Gamecocks. 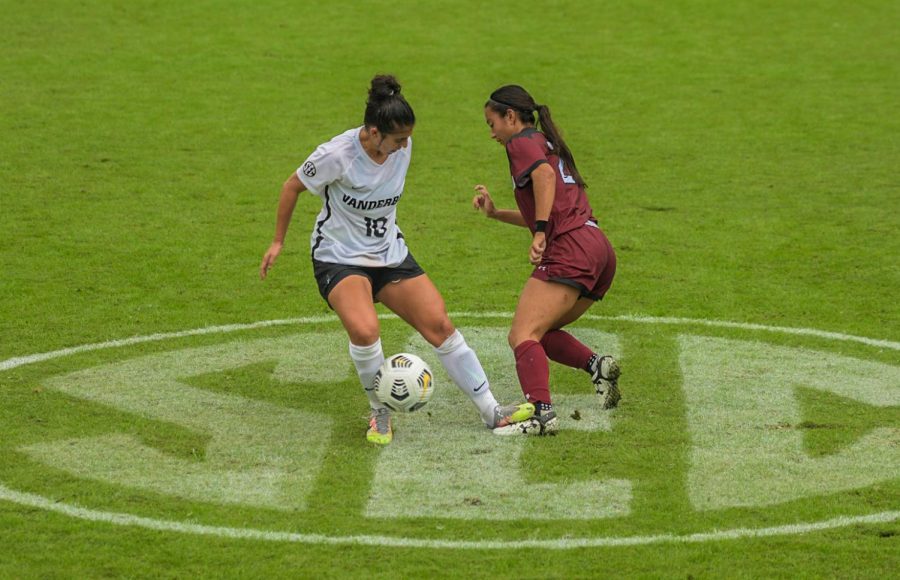 On a cloudy day in Nashville, Vanderbilt soccer took on the 2-1 South Carolina Gamecocks in what turned out to be an overtime thriller. It ended with a controversial penalty that lifted the Gamecocks over the Commodores to a 2-1 victory.

The first half provided entertainment but no goals. Senior midfielder Leila Azari had a few crosses into the box that looked promising, but ultimately, the passes found open space at the back post rather than a Commodore teammate. Vanderbilt kept possession for large swaths of the game, but South Carolina pressed the Commodore defense more than once. Overall, the two teams each had their first-half chances, but both defenses were playing at the top of their game and would not relent.

The second half proved more eventful in terms of scoring. In the 49th minute, South Carolina put a goal on the board first with a tricky through-ball into the heart of the Vanderbilt defense. The pass came from a few yards outside the 18-yard box and found Ryan Gareis near the 6-yard box. Gareis did the rest, sliding the ball just past keeper Sarah Fuller to give the Gamecocks their first advantage of the day.

However, the Commodores came right back with multiple shots; perhaps a bit ambitious, as they came from outside the penalty box. But it got their offense rolling, and the pressure started to mount on the Gamecocks as they put more defenders behind the ball. Eventually, the Commodores’ first goal came from a freshman defender, Alex Wagner, in rather bizarre fashion.

After making an overlapping run down the right sideline, Wagner received the pass from Azari and looked for a header finish in the box. But Wagner got a little more than she bargained for, thanks to a deflection from the South Carolina keeper. Despite efforts to keep the ball out of the net, the sideline referee decided the ball had completely crossed the goalline, and the game was level at 1-1.

South Carolina players were understandably upset at the ruling, but the favor was returned in the second period of overtime. After a first half of overtime that yielded more opportunities without a score, the Gamecocks found themselves knocking on the Vanderbilt 18-yard box. Suddenly a cross came into the box and deflected off a Commodore defender. At first, the referee allowed play to continue, despite protests for a handball from the South Carolina bench. But a few seconds later, the referee blew his whistle and awarded a penalty kick. The referee decided that the ball hit the elbow of the Vanderbilt defender; however, it appeared as though her arm was still at her side, which would not be cause for a handball decision. The Vanderbilt players were clearly upset, but the call had been made and there was no VAR to review the play. Anna Patten stepped up and buried the penalty, giving the Gamecocks their third win of the season and a final score of 2-1.

“Initially, he called it no PK, he actually said play on and then waved it away, and then changed his mind when there was a lot of screaming and shouting,” Vanderbilt head soccer coach Darren Ambrose said.

Still, Coach Ambrose knows that his perspective on the decision was slanted and hopes to get clarification from the game tape.

“I think it’s one thing to give my opinion, it’s another thing to look at video,” Coach Ambrose said. “And I need to look at a video before I make a comment.”

However, he took positives away from the game too.

“I thought they made a tremendous adjustment in the system they’ve never played before—I thought they were excellent in it. And we still ended up pretty much carrying a lot of the game into their part of the field,” Coach Ambrose said.

Coach Ambrose said that he felt like the offense created chances, but the finishing wasn’t up to their standards today.

“A quarterback can stand in a skeleton system and throw every pass he wants. And then he gets under pressure and suddenly misses. So we don’t do anything different. They will do the same things, and eventually, it’s going to break for them [the team],” Coach Ambrose said.

A week of preparation and rest will suit Vanderbilt well after a hard-fought loss today. The Commodores will have to look to their next game to improve their record when they travel to Gainsville to face the Florida Gators on Oct. 18.