Vanderbilt soccer fell to 1-2 on the season after a close loss to Missouri. This week, the Commodores will have a chance to redeem themselves against South Carolina. 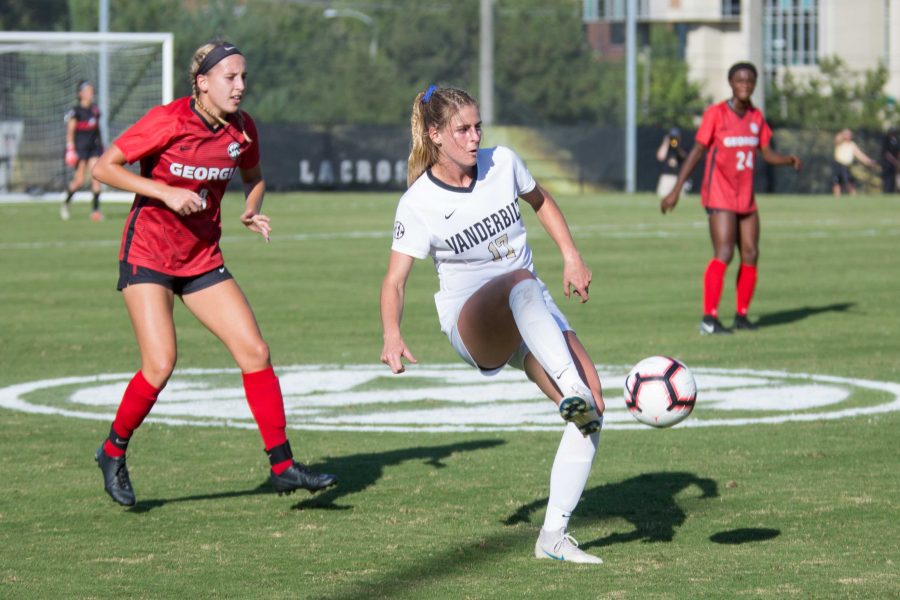 Last Saturday, the Vanderbilt Commodores fell to 1-2 in the 2020 season following a 2-1 loss to Missouri, their first loss to the Tigers since 2015.

The Tigers scored their first goal within the first 13 minutes as the Commodores tried to warm up.

“For the first 20 minutes, we looked asleep and heavy legged. I’m not going to make excuses for us, but flying and sitting around a hotel for hours isn’t ideal preparation to play,” Ambrose said. “That’s the COVID world we live in unfortunately, and we just have to do a better job of tweaking the schedule and how we do this.”

This Sunday the Commodores play against South Carolina, a team they’ve tied against for the past two years. The Gamecocks come into this game with a 2-1 record with a strong offensive lineup, consisting of freshman forwards Catherine Barry and Rylee Foster. In their last game against Missouri, Barry and Foster racked up three goals, the first time since 2012 that freshmen have combined for three or more goals.

“I’m excited to play because they’re a good team. It’s always been a really good game with us. We’ve tied the last two games 0-0. We lost by a goal in overtime one year; we beat them by going to overtime,” Ambrose said. “ It’s going to be an opportunity for us to reestablish our own performance and get the ball down and play out. I want to see a response from our team.”

Ambrose said he is looking to the upperclassmen to take command on the field, especially in this weekend’s game against the South Carolina Gamecocks, but injuries continue to be a concern for the Commodores.

Senior defender Myra Konte is just getting back onto the field after two weeks off, and key upperclassmen Haley Hopkins and Madiya Harriott both played minutes during the Missouri game despite recent injuries and fewer practice days.

“Last week we had a couple girls who trained one day out of six. That’s not enough. They weren’t as sharp as they were capable of being,” Ambrose said.

Adding insult to injury, the conference-only season has left the rhythm-oriented Commodores struggling to find their groove.

Much like the Tennessee game two weeks ago, the Commodores created many scoring chances in the Missouri game but failed to follow through; the missed opportunities were especially evident during the final minutes of the game as freshman midfielder Abi Brighton headed the ball, only to hit the post.

“Missouri was very much a direct, smash-the-ball-in-your-face kind of team. Our team is based on rhythm, and we’re really young in the season. Third game in, it’s much easier for a team that’s direct to be successful,” Ambrose said.

“This is the year that we’re going to learn and take some hits, but it will pay off,” Ambrose said.

The Commodores will kick off against the Gamecocks this Sunday, October 11 at noon on ESPNU.