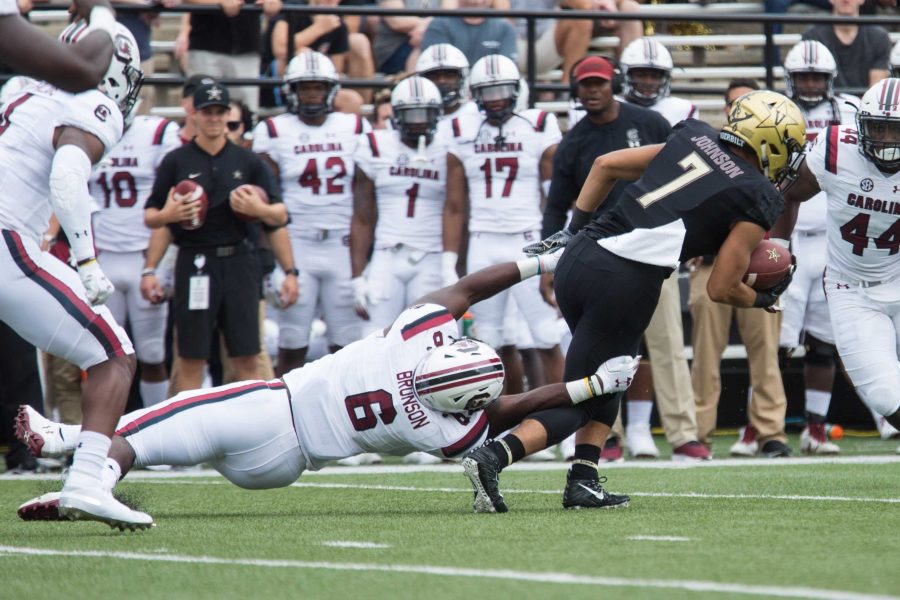 After a tough loss to No. 20 LSU in their home opener last weekend, the Vanderbilt Commodores are set to face the South Carolina Gamecocks at home in Week Three. The Gamecocks come with their own 0-2 record, after losses to No. 16 Tennessee and No. 3 Florida. Both the Commodores and the Gamecocks will enter onto Dudley Field with a lot to prove, but only one will leave with their first win of the season. The Vanderbilt Hustler caught up with Michael Sauls, the Co-Sports Editor of South Carolina’s student-run newspaper, The Daily Gamecock, to talk about the Gamecocks and what to expect from this weekend’s matchup.

Vanderbilt Hustler: What went well for the Gamecocks  in a two-touchdown loss to No. 3 Florida?

Michael Sauls: It’s kind of hard to be optimistic as a Gamecocks fan right now. But a positive takeaway is that the running game was unbelievable. Kevin Harris really ran through the Florida defense when he was on top of his game. I think our running game was showing lots of life. And you know Shi Smith, one of our top receivers, is really just continuously proving he’s the go-to guy. He was kinda in Bryan Edwards’ shadow, who plays for the Raiders now, last year but Shi has definitely stepped up. I think he had at least 10 catches in Week One and Two. Colin Hill has shown great poise. Obviously I’m not on the field, I don’t know what goes on behind the scenes, but from the Florida game, even though it seemed like we couldn’t take a lot of good takeaways, I think definitely the running game coming to life was something positive.

What are your expectations for the team this season and what do you think they’re capable of achieving?

Beginning of the season when we did State of the SEC with the Auburn Plainsman, I said we were shooting for a .500 record at least or maybe just a game above .500. But honestly, with an all-SEC schedule and the way we’ve not been able to finish games out recently, I think shooting for .500 is kind of our ceiling right now. I’m a pessimist, so I’m at the point where we’re probably gonna sit at .500.

From what I’ve heard in press conferences, he’s a great locker room guy. He really came in and won the job. He had that experience playing in Mike Bobo’s offense at Colorado State. But Nick Muse, one of our tight ends, said he was just cool, calm and collected. He’s got his head on straight; he’s a great pocket presence. I haven’t really seen him move around a lot,  but I think a lot of people were surprised that he got the job. I personally think that Ryan Hilinski was thrown into the starting job last year and didn’t have a lot of time to develop. So I think having Collin starting this year and just the amount of experience he’s had, he’ll not only be able to be a leader during the game and practice but he’ll be able to develop Ryan, freshman Luke Doty and the other recruits we have coming in.

South Carolina is coming off of two tough losses, prompting discussion about Will Muschamp’s future with the program. How is Will Muschamp’s job security this season and beyond?

Well, that’s a tough one. Obviously fans aren’t happy with what we’ve got going on. His first couple years, I’ll give him credit; we were great. And it’s just been a slippery slope ever since then. At the beginning of the season, I thought this was gonna be his make or break season, but then COVID hit. So I think this year he’s gonna have a little bit of leeway because his contract is huge. We’re not gonna be able to buy him out. We’re gonna have to pull some private owners if that’s gonna happen. I don’t think logistically that’ll be a good decision to buy out his contract because of how big it is. But I think, due to COVID, the University Administration and the Athletic Department see this year as kind of his last grace period, and that next season will be his make-or-break. I don’t want to see him fail. I wanna see Mushchamp do well. He has done a lot for our program. He’s a great recruiter,, and it’s just kind of a fact of translating that talent from the hype videos we get and from practice onto the field. He’s got to turn it into winning games sooner rather than later.

No. 3 Florida put up 268 passing yards on the South Carolina defense last Saturday. What do you think will be the key to the Gamecocks’ defense containing Ken Seals and the Vanderbilt offense?

First off, we’ve got to tackle. I don’t know if you saw the video that went around, there was one point where I think it was [Trevor] Grimes, the Florida receiver, he broke through the middle and through five Carolina defenders all at once. We have a lot of experience in the secondary with Jaycee Horn, Jammie Robinson and then Israel Mukuamu. And those guys, they’re really good players. I know Jaycee Horn is projected to go in the first or second round of the NFL Draft. So we’ve got a lot of talent on defense; it’s just a matter of execution. And in the box, we’ve got Jordan Burch. We’ve got Ernest Jones. These guys are all great, talented players. I think it really just comes down to execution, and I think we did not execute very well at all on the defensive side of the ball against Florida.

What is your prediction for the final score this weekend?

So during the Florida game, I tweeted that we might be able to beat Vandy. Like I said I’m a pessimist and don’t have a lot of confidence in our team right now but, hopefully, the team is gonna have a good week of practice. I think we’re gonna beat y’all. I hope we beat Vanderbilt. Final score wise, let’s go 24-21, us. And I hope it’s nowhere near that, I hate to be this guy, but I hope we destroy y’all just because it’ll be huge for us. We’ve also beaten y’all 11 years in a row, and I’m not ready to see that streak get snapped. I think it’s gonna be a good game. Both teams have a lot to prove.