Multiple Vanderbilt students mistakenly placed into isolation or quarantine after a miscommunication with Vault lead to false positive test results. 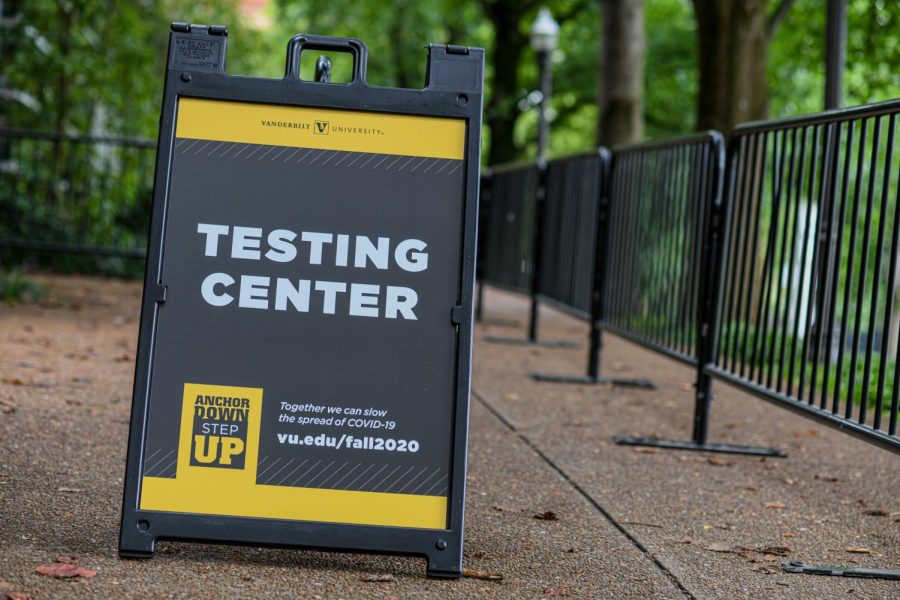 The David Williams II Recreation and Wellness Center is being used as a COVID-19 testing location. (Hustler Multimedia/Truman McDaniel)

Three students who were contact traced were Resident Advisors (RAs) from Hank Ingram House. They turned themselves into quarantine after they carpooled with a mutual friend who later received a positive COVID-19 test result.

“Friday night we [went] into quarantine,” fifth-floor RA Sophie Thormann said. “Then [Saturday] morning at 12:30 [p.m. CDT], the person who had been in the car with us gets an email, or at least that’s when I heard about it. I don’t know when this email arrived, but an email from Vault saying ‘Hey, so we changed your test results, it went from positive to negative.’”

While the university offered retests for the students, Thormann, the two other RAs and their contact were not required to complete a retest. Thormann was contacted by Vanderbilt to ensure she had left quarantine.

“[Vanderbilt] stressed once again that it was a false positive. They had retested the sample and realized there had been some sort of lab error.” Thormann said.

In an Oct. 1 statement to The Hustler, a university spokesperson said that Vault was responsible for the miscommunication to students, and that this particular group of tests were affected by an isolated error.

“Per Vault’s protocols, the test data had been flagged for further analysis. However, the data also was mistakenly placed in the queue for results that were ready for communication,” the spokesperson said.

Vault identified data and communication issues in connection with the test result reporting, per an Oct. 1 email to The Hustler.

“We reported positive test results for five students on Vanderbilt’s campus as a result of making diagnostic determinations from a failed analysis plate which should not have been reported on; in fact, upon repeat of the failed plate all individuals were reported as negative,” Vault’s Oct. 1 statement read.

Vault discovered the error at 11:40 p.m. CDT on Sept. 25 after the repeat results were flagged by the system, which identified a difference with a second results report for the same samples, according to their email.

The company’s operations team responded with the wrong information. A quality assurance investigation revealed the operations team error and Vault immediately communicated this information with Vanderbilt University administrators, per Vault

“We moved too quickly to share updated results.” the email said, “To be clear, this was not a case of the assay returning false positives, this was a human process error.”

After Vanderbilt verified the students’ negative test results with Vault, they were released from isolation at the Village at Vanderbilt, as were their close contacts, per the university.

“The impacted individuals were in quarantine and isolation less than 24 hours,” Vanderbilt said.

Confusion and fear for affected students

Back at Hank Ingram House, Thormann described a “chaotic and stressful” environment as she reported that other students had also been affected by positive test results.

“I ran into a group of girls from Hank 3, who had also been traced to a different false positive,” Thormann said. “There was so much confusion.”

Thormann said she was waiting to be transported to quarantine housing when she encountered three other students from Hank who had also been identified as contacts. Thormann saw the same three students returning from quarantine the next day and confirmed that they had also been affected by erroneously communicated false positive results.

“It seems like there might have been more going on,” Thormann said. “It wasn’t just our sample; there was something bigger happening.”

In their Oct. 1 statement, Vault disclosed plans for corrective actions that would reduce the risk of future human error.

“All team members involved in the data review process will be re-trained on properly ensuring that only plates that pass Quality Control are routed for analysis and subsequently reported,” Vault stated.

Vault said they plan to change the file directory to more clearly differentiate between analysis and reporting and update the reporting software to alert management when a change in test data occurs. Changes in communication are also high-priority for the testing company.

“A new communication procedure has also been implemented to ensure that the correct and appropriate order of communications are executed,” Vault stated.

Vault CEO and founder Jason Feldman in an Oct. 2 email statement said that Vault’s false positivity rate is about one percent.

Feldman said there have been no issues with the quality of testing for large consumer groups like Vanderbilt. Feldman cited robust process and data quality controls in mitigating concerns.

“IBX [Vault’s test service provider] has a number of internal processes that mitigate the likelihood of inaccurate results that range from controls that are present during sample processing as well as on the PCR plate, and data quality controls as well,” Feldman said. “The lab also engages in periodic quality control with samples from other labs to ensure that the assay is performing as it should.”

A Vault representative stated in an Oct. 2 email that the company was unable to release data about Vanderbilt’s testing results or instances of genuine false positives without the university’s permission.

The university’s Return to Campus plan tells students to self-report symptoms and remain accountable for protecting their fellow students. The affected RAs in Hank Ingram House cited their high-risk residents and contact with first-year students in their decision to quarantine.

“We turned ourselves in out of concern for our residents,” Thormann said. “Those of us who were traced back to the false positive were fine.”

If you believe that you have been exposed to COVID-19 or are experiencing symptoms, contact the Student Health Center or call the COVID-19 hotline at 615-343-1352.