Nora Fellas, owner of @nastyfeminism, talks school, life and why activism must go beyond Instagram. 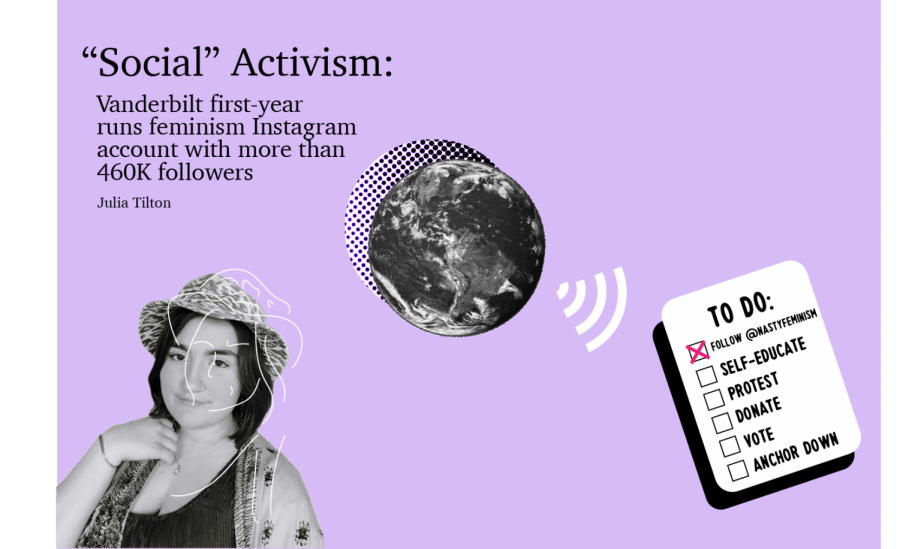 Editor’s Note: First-year Nora Fellas is a staff writer for The Vanderbilt Hustler

For first-year student Nora Fellas, Instagram stretches far beyond its virtual boundaries of filtered beach images. Her activism account, @nastyfeminism, has attracted a community of more than 462,000 followers as an advocacy platform for issues ranging from women’s rights to anti-racism.

When she first created the account in July 2017, Nora had no idea it would generate the following it has today. She said she made the decision to start @nastyfeminism partially in response to her frustrations about the state of the nation in the aftermath of the 2016 presidential election.

“I felt like there was a lot of apathy among young people, even though a lot of the issues really do affect us,” Fellas said.

Although she could not vote when she first created the account, Fellas said social media allowed her and other teens to feel more connected to their responsibilities as civically-engaged citizens. As the page gained traction on Instagram, she found the content she posted was evolving to encompass a wider array of issues and ideas.

“After I gained a couple thousand followers, I started to think about the account more with the audience in mind instead of focusing on me,” Fellas said.

She also said she feels a great sense of responsibility coming from managing her platform and that it has delegated her actions online.

Because of this, she said she diligently fact-checks sources and attempts to provide clear explanations to inform her followers about topics ranging from the COVID-19 pandemic to the Black Lives Matter movement.

In addition to posting about current events on her page, Fellas said she also tries to incorporate the perspectives and voices of marginalized groups into her content, for she does not believe they are always given equal airtime in the mainstream media.

While the @nastyfeminism community has certainly enabled Fellas to educate herself and connect with others in a positive way, she said there are downsides that come with social media popularity. One key frustration she cited was the prevalence of hate speech in her posts’ comment sections, something she said she has to continually monitor by manually deleting incendiary comments.

From a personal standpoint, however, Fellas said the account has encouraged her growth as an active member of society. She said managing her platform has required her to expand her horizons and familiarize herself with both domestic and foreign issues, and in some cases, the @nastyfeminism community has been able to help.

She said that her followers from abroad will at times direct message her with articles relating to a specific problem or human rights violation occurring in their country. After receiving these submissions, Fellas said she takes it upon herself to conduct further research before posting about the issue on Instagram.

While she wants to eventually become a full-time journalist, Fellas plans to begin by studying English and Communications at Vanderbilt. Her dream job, she said, is to be an opinion writer at a publication.

In the meantime, Fellas said she wants to emphasize that activism is not confined to social media, nor should it be. Instead, she wants to urge young people interested in activism to pursue real-life opportunities for action in tandem with following social media accounts like hers.

“I think accounts like @nastyfeminism are a good jumping off point, but we do have to continue our efforts in real life. Working on campaigns, going to protests, having conversations and calling people out in our daily lives, all of that is so important,” Fellas said.