Azari, a senior midfielder, reflects on her career with Vanderbilt soccer. 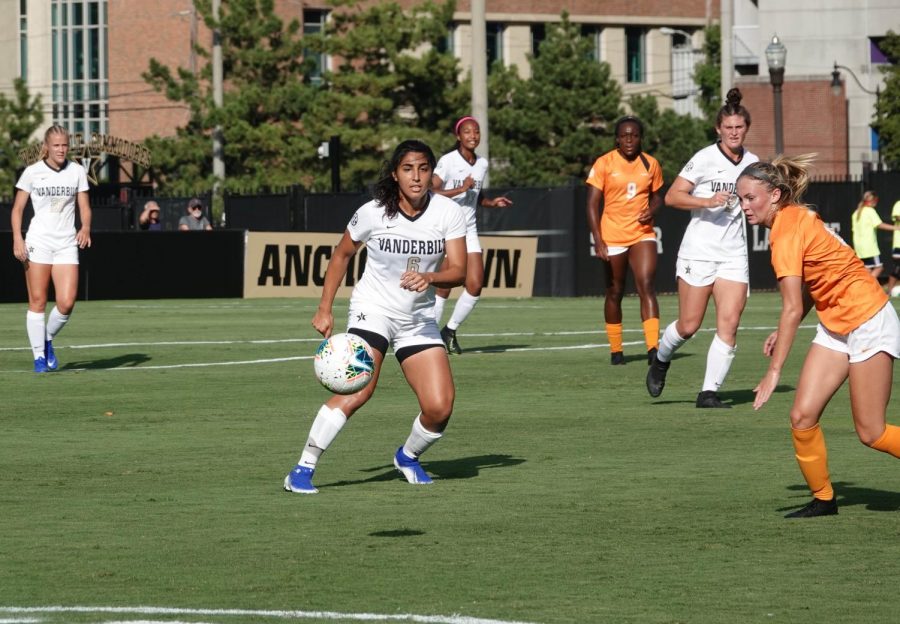 Leila Azari against the University of Tennessee in 2018. (Hustler Multimedia/Brandon Jacome Mendez)

A soccer player’s contributions go far beyond goals and assists.

This couldn’t be more true for Leila Azari, a four year contributor for Vanderbilt women’s soccer. She came into the program in 2017 and was immediately put into action, starting a whopping 20 games as a freshman.

Now a senior, Azari is hoping to take what she’s learned since her freshman year and lead the team to another successful season—a season like 2018, when the Commodores captured the  SEC regular season title. Since her arrival, Azari has focused on making sure her play fits with her teammates, rather than the other way around.

“I’ve learned more about playing as a cohesive team unit. And my part in that is making sure that I know what my job is,” Azari said. “I need to help my teammates when I play. I think that’s the most important part of the game for me—making sure I’m being a team player.”

She has indeed been a team player right off the bat. In the first game of the season against Kentucky, she notched an assist by connecting with Haley Hopkins for a crucial goal that helped the Commodores dig their way out of a 2-0 hole en route to a 3-2 victory. Azari says the team never panicked, despite trailing by a pair of goals at halftime.

“[Coach Ambrose said] This was a chance to prove ourselves and what we were made of. He said this is really just a test of character. Can you come out of this deficit?” Azari said.

The win has added meaning because of an abbreviated season. With only eight regular season games this year, each weekend will be a real test of character for all SEC teams. And because each contest looks and feels different in this pandemic season, so too does the mentality and preparation each week.

“[We are] basically taking it week by week. There’s a bigger chance for recovery and a bigger chance to look over mistakes and game plans. But at the same time, there’s less games to play. And that means each game matters more. So, we show up every day to practice wanting to give it our all because we didn’t have that chance over the summer and in the late spring when everything got cancelled,” Azari said.

Azari stays humble and focused on the team. Whether she’ll say it or not, she’s a key component to the success of the Commodores, and if they want a shot at an SEC title, she’ll need to be on the top of her game. She brings experience and leadership to a Vanderbilt attack that can strike quickly and consistently with Hopkins at the head.

When reflecting on her time at Vanderbilt, she notes not only her athletic growth, but also her academic and personal improvements as well. But all good things must come to an end.

She didn’t end on a sad note though. She thought back to her time on the team and recognized how far the program has come.

“My favorite memory would have to be when we found out that we won the SEC regular season. That had never even been a possibility for Vanderbilt soccer. Previously, it was like, can we even make the SEC tournament?” Azari said. “We have come so far and that’s just an amazing feeling.”