The 20th-ranked LSU Tigers come to town for the second straight season—only this time, they're looking for their first win. 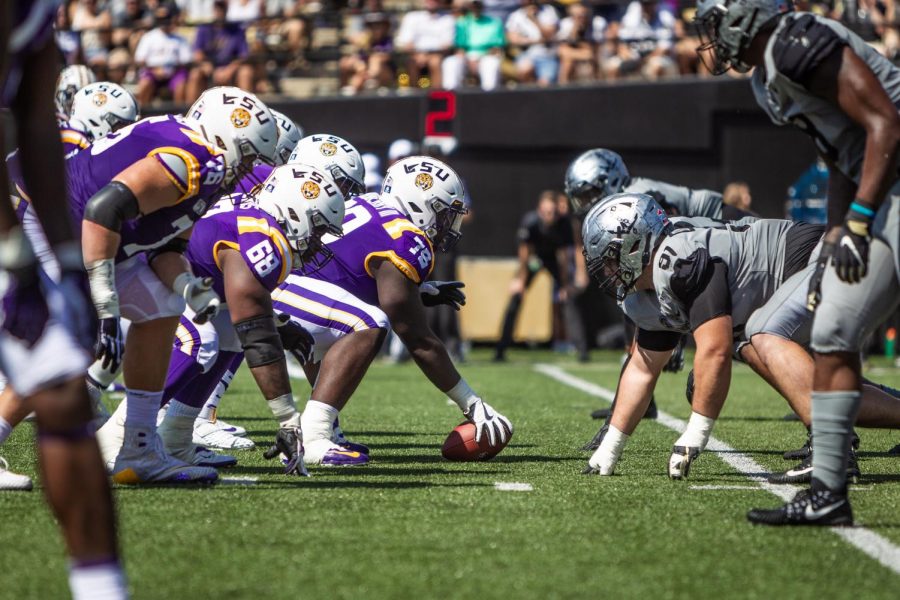 The 20th-ranked LSU Tigers will travel to Nashville to face the Vanderbilt Commodores on Saturday, Oct. 3, the second straight season the two have met at Vanderbilt Stadium. Last year, the Tigers delivered an emphatic, 66-38 thrashing en route to a National Championship, but both teams enter this season’s game in a much different position. In fact, after Week One saw both the Commodores and the Tigers lose to Texas A&M and Mississippi State, respectively, both teams will be seeking their first win of the season. In previewing the game, The Hustler provides three matchups to watch this Saturday; key matchups that could ultimately decide the outcome of the game.

After losing two starting seniors on their defensive line due to opt-outs and transfers, the LSU Tigers had to fill out their new 4-3 line with four 4-star freshmen. This new formation comes with the installment of Bo Pelini as defensive coordinator. However, this new defensive line still couldn’t stop Mississippi State, as the Tigers lost 44-34 last week.

With five sacks for a combined loss of 38 yards, Seals and the Commodores offensive line need to look out for Damone Clark, JaCoby Stevens and Jabril Cox on the other side of the ball. Clark made 11 of the Tigers’ 59 total tackles while also intercepting Mississippi State quarterback K.J. Costello and returning it for a touchdown. This fast and aggressive defensive line will certainly be a challenge for Vanderbilt’s patchwork offensive line.

Seals’ skills were highlighted in his debut for Vanderbilt against the 10th-ranked Aggies. With 150 passing yards and 20 completions, Seals showed a new side of the Commodore offense that has not been seen in years. With his field vision and his almost veteran-like knowledge of the new playbook, Seals has the potential to connect for multiple touchdowns. Against this fast LSU defense, Seals will have to consistently dish out quick passes to keep the pressure off of the offensive line, or else LSU might have more than a few sacks against him.

LSU was sorely missing 2019 Heisman Trophy winner Joe Burrow during Saturday’s loss to Mississippi State. Myles Brennan, starting his first career game at LSU, looked overwhelmed and underprepared against a high-speed Bulldog pass rush. Brennan went 27/46 on passing attempts for 335 yards and three touchdowns, but threw two picks and was sacked seven times. Brennan played well statistically but did not show up in crunch time when the Tigers needed him. Brennan needs a big game against the Commodores to silence his critics, but do not expect the Vanderbilt defense to make it easy for him.

The Vanderbilt defense looked ready to play last week despite a losing effort to Texas A&M. Vanderbilt caused five fumbles against the Aggies while sacking Kellon Mond once and hurrying him twice. The Commodores did, however, allow 376 yards of total offense, including 187 on the ground. This could be concerning, as LSU will likely focus on the running game to relieve the pressure on Brennan. But hope remains for Vanderbilt, as Brennan’s decision-making was questionable at times, and he held onto the ball for too long too often. This will make him a target for Ted Roof’s aggressive blitz-heavy scheme as the Commodores look to rattle the inexperienced signal caller.

For a school that calls themselves “Defensive Back University”, LSU’s secondary got torched by Mike Leach’s air raid offense. The Tigers surrendered 623 yards and five touchdowns through the air, but did intercept K.J. Costello twice. All-American corner Derek Stingley Jr. was out with an illness and is hopeful to return versus Vanderbilt, but serious concerns remain. LSU simply could not stop the Mississippi State air attack, something Todd Fitch will be looking to exploit.

While a sizable chunk of Vanderbilt’s yards on Saturday came from the rushing attack, the passing game looks promising. Receiver Amir Abdur-Rahman had a career day against the Aggies, catching five passes for 72 yards. Abdur-Rahman also scored the only Commodore touchdown after catching a pass from Seals in the red zone. He, along with pass catchers Cam Johnson and Ben Bresnahan, has the potential for big games against the LSU secondary.