With new offensive and OL coordinators, Coach Mason has hope for Vanderbilt’s debut against Texas A&M despite multiple opt-outs and injuries this offseason. 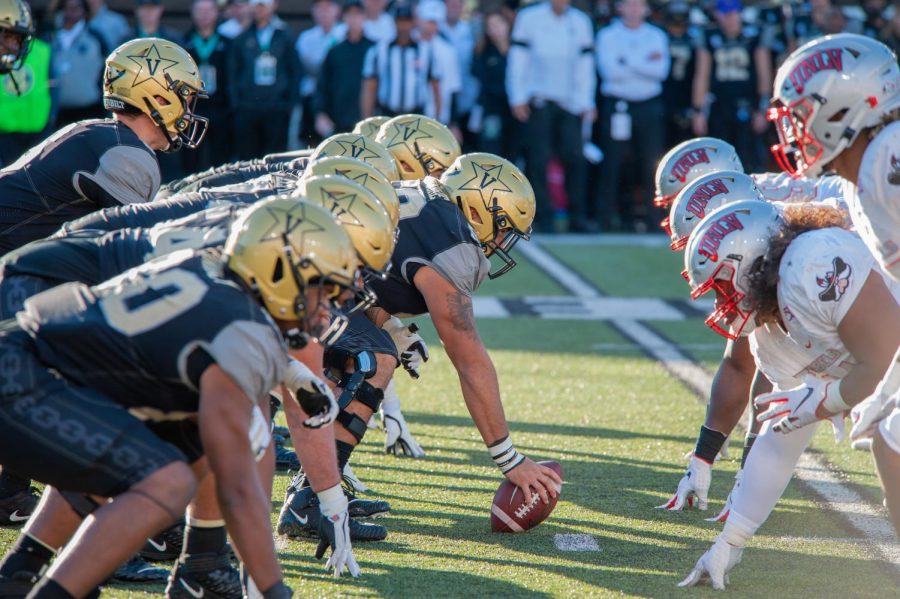 At Tuesday’s press conference, Vanderbilt head football coach Derek Mason came out optimistic and enthusiastic about this weekend’s game against Texas A&M. Despite concerns surrounding Vanderbilt’s makeshift offensive line, Mason was adamant that there are a solid eight or nine guys heading into game one.

Fluid indeed—after losing four offensive linemen to COVID-19 related opt outs, Mason was forced to switch Drew Birchmeier’s position. Birchmeier, a defensive lineman for the past three seasons, will switch over to the offensive side of the ball—no small task, even for a redshirt senior. This immediately raises questions about how Vanderbilt’s offensive line will match up against fierce SEC pass rushes.

“I think this is a great opportunity for this football team to get better,” Mason said. “We’re going to have to look at playing several young guys in this group, and that’s okay.”

When asked about concerns he had surrounding the offensive line, Mason simply said that he’s excited about where they stand at the position and that the depth chart can be deceiving, as they have guys ready and waiting in the wings.

While no comment was made on specific names of the new talent from the head coach, Grant Miller, an anchor on the offensive line, highlighted a few up-and-coming linemen in Tuesday’s press conference, pointing out juniors Dan Dawkins and Tyler Steen, as well as Birchmeier and 6’6’’ freshman Bradley Ashmore.

“He [Ashmore, an early enrollee] was able to see a good handful of reps in the spring, and these freshmen got a lot of reps in the summer, which I think has helped their development. I’ve been very impressed by their work ethic,” Miller said.

“I tend to like the fast-paced play, and I’m definitely looking forward to getting out on the field Saturday and trying it out for the first time,” Miller said. “It took a little bit of time, and it is a bit more of an adjustment going through a faster-pace offense — making the reads, making the IDs as a center. I think communication has got to be a lot quicker. Guys need to be on the same page.”

When asked about Coach Fitch, Miller said that there was a learning curve with such a strange offseason, but the team has adapted.

“I think the older guys picked it [the playbook] up fairly quickly because they’ve just been around the game so much. And the younger guys are very driven. I mean, the young guys, I’ve really got to tip my hat to them,” Grant said.

Among all this praise, only time will tell if the offseason preparation has paid off. This Saturday, the line will have to face the likes of Texas A&M DL DeMarvin Leal. The list of other tough SEC pass rushers the Vanderbilt offense will face includes,but is not limited to, South Carolina’s Aaron Sterling, Mississippi State’s Marquiss Spencer and Georgia’s Malik Herring.

Derek Mason certainly has faith that his patchwork offensive line can protect its quarterback from feared SEC opponents.