Temperature checks in Hank Ingram cause confusion among first-years, chalked up to miscommunication

Woman seen in Hank lobby on Sept. 14, took temperature of both faculty and students. 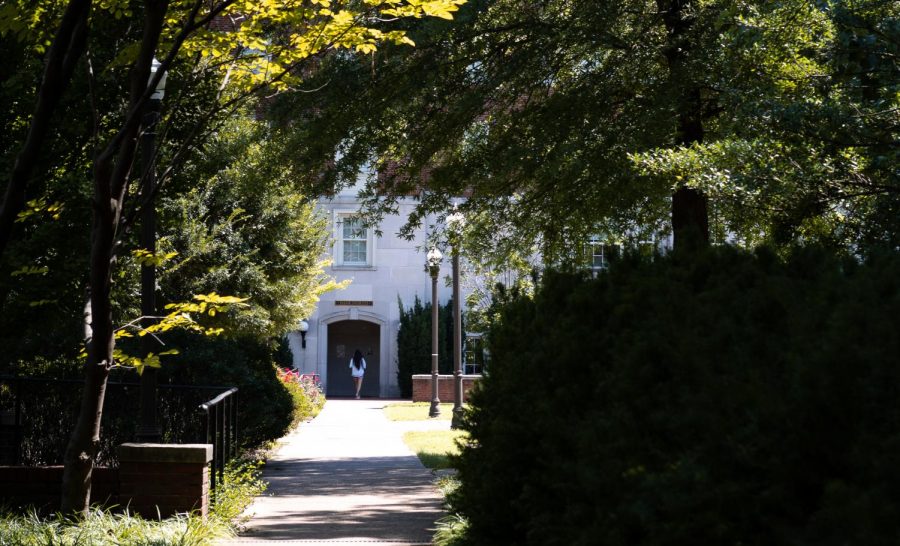 A student walks towards the entrance to Hank Ingram House on the Ingram Commons. (Hustler Multimedia/Ethan Jiang)

On Monday, Sept. 14, until Wednesday, Sept. 16, students living in Hank Ingram House were required to show their Commodore Cards and participate in a temperature screening before they were allowed to return to their rooms. Later, a university spokesperson clarified that the procedure was meant only for staff.

“A new security officer who was implementing their training on their first day began performing temperature checks for employees and students. This has been addressed as the university’s protocols do not include temperature checks for students entering and exiting Hank Ingram at this time,”a spokesperson from the Office of the Dean of Students said in an email to The Hustler.

Without any advance notice of the screening protocols, many first-years said that they were confused and concerned about the sudden change. The security guard conducting the screenings, Yolanda Allen, said that she was new to her job at Allied Universal security company. She did not have an answer for students questioning the reasoning behind the policy.

“I asked [my supervisor] yesterday, because students were asking me how long this is going to be,” said Allen on Sept. 16. “She said we don’t know.”

A spokesperson for Allied Universal said the temperature checks are a COVID-19 screening process, which was meant for staff.

“As far as how long it goes on, that would be up to the university as to how long they want us to continue to do so,” the Allied Universal spokesperson said.

As news of the change spread across the Ingram Commons, many students were confused as to why only one dorm was being affected.

“The security guard in the lobby usually checks our IDs after 8 p.m. [CDT], but I’ve never seen people check our cards during the day, and I’ve also never had temperature checks,” first-year Sarah Lyou, who lives in Murray House, stated in a message.

The singular location sparked rumors about possible COVID-19 exposures within Hank Ingram, with some theorizing that recent cases within the house led to the student screenings.

“I heard some rumors from other people in the Hank building that there were some cases [on another floor], which made me a little nervous,” first-year Keyanah Alexis said.

However, it was later revealed the policy change was a miscommunication between the university and Allied Universal staff.

Procedures for entering Hank Ingram House have since returned to normal, with security checking students’ Commodore Cards only after 8 p.m. CDT and no temperature screenings for students, per a university spokesperson.