An inside look at quarantine both on and off campus 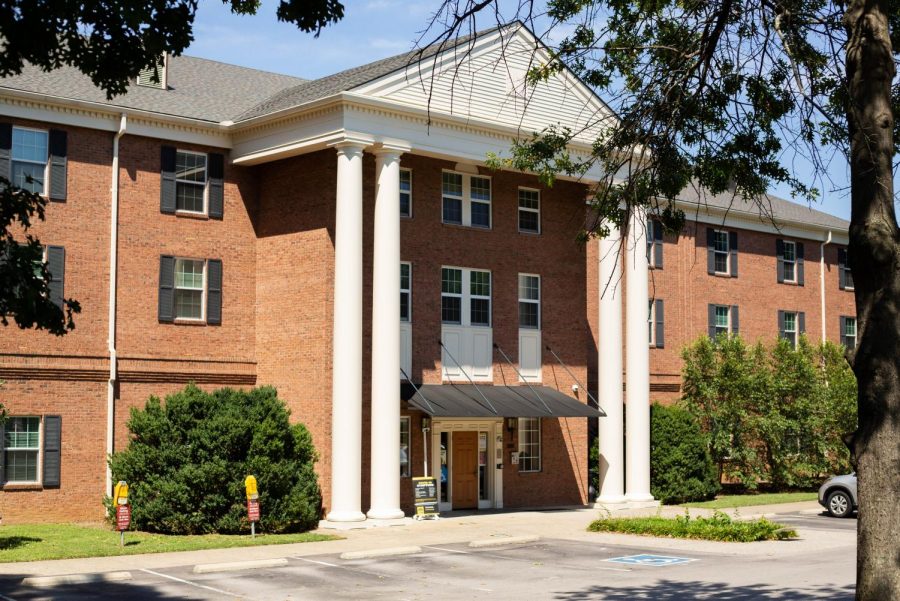 Blakemore House is located on Vanderbilt Place next to the Vanderbilt University Police Department and less than one block from Dudley Stadium and McGugin Center, the home of Vanderbilt Athletics. (Hustler Multimedia/Mattigan Kelly)

According to Vanderbilt COVID-19 policy, students who test positive or have been exposed to someone who has tested positive for COVID-19 must isolate and quarantine appropriately. The Hustler sat down with multiple students to compare their isolation experiences on and off campus.

“University health officials will make medical determinations and assign campus residents to either diagnostic quarantine or COVID-positive isolation to sites specifically designated for these purposes,” the Return to Campus plan reads. “University health officials will make medical evaluations and release campus residents from quarantine or isolation to return to their campus residence hall room when deemed medically appropriate.”

Vanderbilt’s Undergraduate Student Quarantine, Isolation and Patient Care tab of the Return to Campus plan states that Chaffin Place, the Village at Vanderbilt, South Tower and Scarritt Bennett Center are also being used for isolation and quarantine.

On Aug. 22, first-year Tristan Lee Cameron received an email notice from Vault that his COVID-19 test was inconclusive. Cameron was unsure what to do until he received a phone call on Aug. 23 instructing him to pack his things. VUPD picked him up in a golf cart and drove him to Blakemore, Cameron said.

Cameron was told that Blakemore was being used as general isolation housing and that other spaces on campus were reserved for confirmed positive COVID-19 cases. His room in Blakemore included  two lofted beds, one mattress with a set of sheets and a blanket, two dressers, two desks, a microwave, a mini-fridge and a trash can, Cameron said. He had to provide his own laundry supplies, towels, hand sanitizer and soap.

“When I asked about soap, they asked if I could use body wash,” Cameron said. “I’ve been using hand sanitizer.”

Cameron had inquired to the original person who called him about getting some soap for his room nonetheless. Five minutes before his call with The Hustler, Cameron  found soap outside of his door that had been delivered by another faculty member.

Cameron said that he felt that Vanderbilt was handling the COVID-19 crisis well but lacked in communication. Once he saw his inconclusive result, he said that he messaged his RA because he did not know what to do. After getting to Blakemore, Cameron said that there was no one in the Blakemore lobby for him to ask questions to, and he added that he had not seen anyone working security in the lobby.

“I just feel like [Vanderbilt administrators] are doing a good job of executing but not communicating,” Cameron said.

Cameron tested negative for COVID-19 on Aug. 25 and returned to his usual dorm on the morning of Aug. 26. When students had to sign up for mandatory testing starting the week of Aug. 31, Cameron was originally unable to sign up,as he was marked in the system for testing positive. The issue has since been resolved, and he is able to test weekly, Cameron said.

Junior Angelica Anthony was moved to quarantine in the Village at Vanderbilt after coming into close contact with a COVID-19 positive teammate on the Women’s Bowling team. Per Anthony, the close contact happened on Monday, Aug. 31 at a dinner where she and her teammates did not wear masks because they were eating. Anthony received the email notification on Wed, Sept. 2 that she would have to be moved out but did not physically arrive at the Village until approximately 9 p.m. CDT—a delay Anthony attributed to the fact that many students were moved after the first results arrived from the mandatory undergraduate weekly testing.

Anthony and her eight teammates had a socially distanced and outdoor workout on Tuesday, Sept. 1, which  did not classify as a close contact. Per Anthony, two seniors present at the Sept. 1 workout did not have to quarantine, but Anthony and five other members were required to quarantine for various durations based on the time of last close contact.

Anthony spent her first two days post-exposure outside of  quarantine but finished her time at the Village on Sept. 15. Per Anthony, all members of her team in contact with the positive case had tested negative as of their most recent Vault tests.

“It’s been really hard, and I hate being confined in a little room,” Anthony said. “Looking at white walls for a long while can make you a little bit insane inside. The good thing is I have a balcony, and that’s been amazing for me. I sat out there this morning.”

While Cameron said he hadn’t seen anyone else during his stay, Anthony said that she recognized some of her classmates when she took out the trash every evening or picked up food deliveries.

Per Anthony, students at the Village  had a one-hour window at approximately 6 p.m. to pick up their meals, which typically included a microwavable breakfast and cold lunch, as well as water, fruit and silverware. Cameron reported the same two-meal delivery at approximately 5:30 p.m.

Anthony added that her coach had been supportive throughout the process, sending snacks and reminding players to be cautious.

“They’ve been really helpful, and they’ve been checking in on us,” Anthony said. “They’re just being very caring and optimistic about the current situation.”

One second-year transfer student, who was granted anonymity for health privacy reasons, awoke on Aug. 25 to an automated email from Vault and several missed calls: they had tested positive for COVID-19. The student was subsequently put on a mandatory 10-day quarantine, and their roommate was directed to isolate for 24 days.

Though they live in an off-campus apartment, the student said that they had frequented Vanderbilt’s main campus in the time between their arrival testing and receiving their results, including visits to the dining hall and transfer orientation events.

Vault contacted the two students and told them that they would be safe living together despite their opposite test results.

“They [Vanderbilt] never offered to separate us and pay for a room,” the roommate who tested negative said. “We’ve gotten one email… but they haven’t been like: ‘Yeah, we’re Vanderbilt, and we’re here to help!’”

The student who tested positive was able to return home for their isolation period in order to avoid spreading the virus to their roommate.

The roommate who tested negative never received their follow-up Vault test. Instead, they, along with other individuals identified as close contacts, independently sought testing from the Tennessee Department of Health to confirm their initial negative test results, per the roommates.

Both students said they found the greatest off-campus quarantine difficulty to be the school’s lack of involvement.

According to the student who tested negative, Vanderbilt offered no financial compensation for unused meal swipes or aid for the delivery of meals from outside sources. The student expressed concern over the funds necessary to complete a 14 to 24 day quarantine.

“I just can’t imagine the kids who are relying on financial aid to get their meal swipes,” the student said. “It’s just disappointing to see that we were the fortunate ones, but we are still in such a bad situation. I just can’t imagine what it would be like if we couldn’t afford those things.”

“I understand that no one really knows COVID,” the student who tested positive said. “Obviously, this is a humongous issue throughout the country. We don’t expect them to be experts, but don’t open the school and act like you can do these things and then not do them.”

When asked what Vanderbilt should have done differently, the student had a simple answer.

“I just want them to listen because they haven’t really been taking us that seriously,” the student said.