Lining up behind the lens: Andre Mintze’s love for multimedia

Linebacker Andre Mintze splits his time between his two passions: football and film. 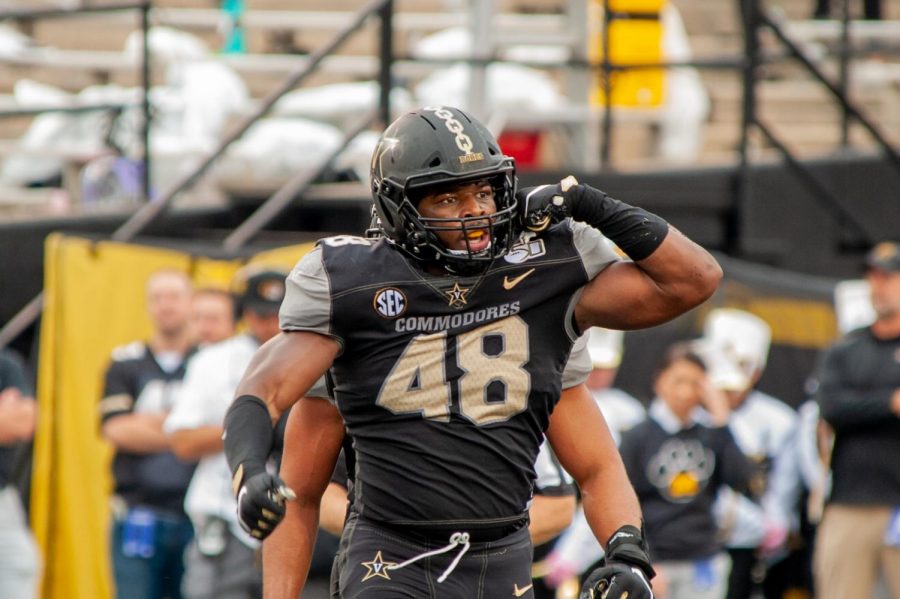 A filmmaker’s goal is to be almost invisible and let the stars of their videos shine.

Fifth-year linebacker Andre Mintze did just that when he filmed senior defensive back Allan George’s proposal to his longtime girlfriend Kaitlyn Richardson on Aug. 30.

His video of George’s proposal went viral and, at the time of publication, has over 80,000 likes on TikTok, with an additional 300,000-plus views from reposts on House of Highlights, SEC Network, Bleacher Report and Overtime, among other major outlets.

“It was a very genuine moment and authentic,” Mintze said. “So I just put the camera on and rolled with it.”

Mintze has come a long way from the photographs and videos he took on a study abroad trip to Australia in the summer of 2018. His initial motivation for documenting the trip was to capture moments and images he never wanted to forget, but that personal project has led to a degree in Cinema and Media Arts and an unrelenting passion for film.

Mintze returned to Nashville and realized that his life as an SEC football player would make for interesting content. He parlayed that passion into a YouTube channel, where he makes vlogs showcasing his life. His videos mainly focus on his routine and his teammates.

“At first, it was primarily for documenting my friendships and my personal friends,” Mintze said. “Years later, we may look at this. And when I started recording, I kind of fell in love with capturing the moment and editing and creating things that will last a lifetime, especially in the social media age.”

The proposal video was a change from his usual funny vlogs, including his “#First48” vlog series on YouTube. The series documents the 48 hours before Vanderbilt football gamedays, and the name is a homage to Mintze’s #48 jersey number.

Mintze has been challenging himself to grow as a filmmaker. He upgraded from his father’s camera to two high-tech cameras to achieve better color and quality in his videos. He says he doesn’t have a defined style yet, but Mintze is encouraged by the constant growth he’s experienced as he’s made more videos over the years.

It’s this drive to improve every day, the same commitment he has behind the lens, that has made Mintze a formidable presence at linebacker for Vanderbilt football. Last year as a redshirt junior, Mintze accumulated a team-high 4.5 sacks to go along with 40 tackles, including 7.5 tackles for loss. He looks to improve on these numbers in an abbreviated season under first-year defensive coordinator Ted Roof.

“We’ve changed the structure of our defense to a four-down front,” Mintze said. “We have some versatility and have some different parts coming in, but the transition has been smooth to say the least with everything happening with the spring ball ending early, COVID and campus shutting down.”

Constantly looking to improve, he takes lessons away from photography that can be used on the football field, and vice versa.

“They’re two completely different things, but the meticulous attitude you have to have about the process, and just the attention to details, is the thing that connects them both,” Mintze said.

Throughout his time at Vanderbilt, Mintze says he’s challenged himself to be limitless — an aspect of student-athlete life that is stressed time and time again by Coach Derek Mason. And after adding “vlogger” to his long list of achievements, it seems that Mintze has done just that in his time here at Vanderbilt. In February 2018, he founded the charity Dancing ‘Dores to get student-athletes involved in fundraising for the Monroe Carell Jr. Children’s Hospital. Mintze also received bachelor’s degrees in both Medicine, Health and Society and Cinema and Media Arts in December 2019.

This year, as Mintze looks to earn a master’s degree in Medicine, Health and Society, he will partner with the school’s film department to elevate his vlogs to the next level. For Commodore fans in the era of COVID-19, this behind-the-scenes content will be a breath of fresh air.

“[The vlogs are] coming, and they’re going to be a lot better with the help of the video department and myself,” he said.