Junior Amanda Nolan celebrates the release of “Phineas and Ferb the Movie: Candace Against the Universe” with 28 days of Phineas and Ferb content on TikTok, collaborating with other prominent TikTokers and show co-creator Dan Povenmire. 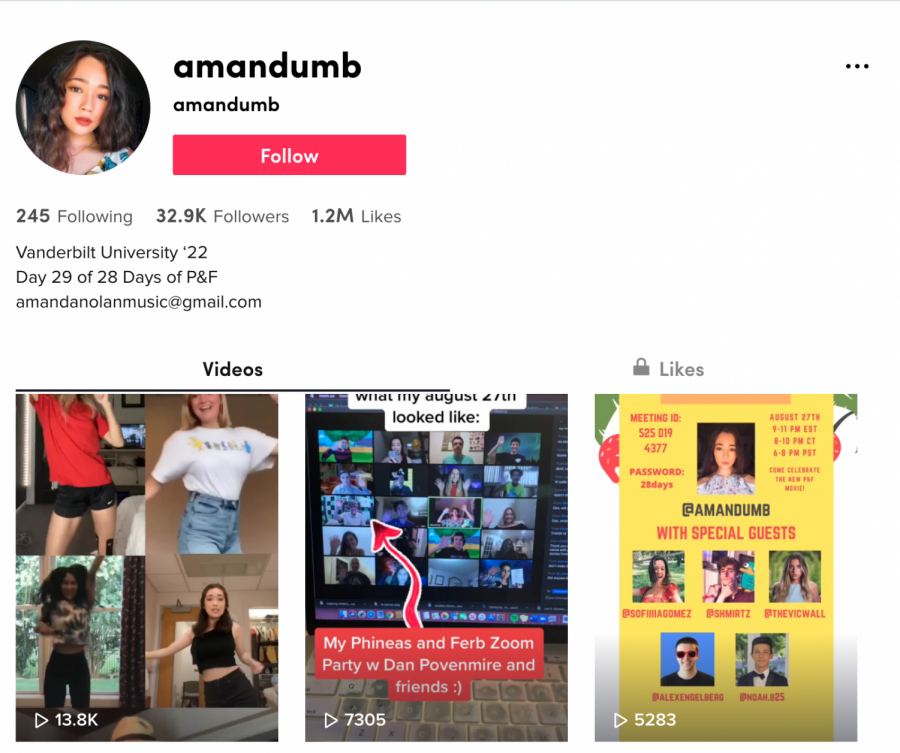 Thanks to social distancing guidelines, this summer may have felt a bit longer than “104 days,” and it certainly didn’t feel like vacation for many. But that didn’t stop junior Amanda Nolan from “finding a good way to spend it”—in the form of a cappella covers of Phineas and Ferb songs on her TikTok.

From the classic theme song to the showy musical numbers of the finale episode, Nolan has amassed a sizable following (just under 33k) on the platform, and she’s had a number of viral hits that have cemented her place in both the fandom and the creator community. So, when Disney unveiled a brand-new Phineas and Ferb movie coming to Disney+ Aug. 28, Nolan said she knew it was her opportunity to embark on her latest and most ambitious endeavor: 28 days of Phineas and Ferb TikToks leading up to the movie’s release date.

Nolan said her solution to the “annual problem for our generation” didn’t come overnight. Inspired by content creators from the classic Youtube era (think Miranda Sings and Ryan Higa), she said she originally began her Internet career with a cappella videos on Youtube, where she has roughly 3000 subscribers. A TikTok representative at Vanderbilt convinced her to try out the young and rapidly growing platform, and Nolan’s cover of the Wii Sports theme almost immediately went viral under her new account.

“It’s crazy how traction built up so quickly. I got to meet people from all different walks of TikTok and we ended up becoming friends,” Nolan said. “That Internet friend connection is so powerful and can help you in ways you might never imagine.”

Childhood nostalgia then helped her go viral again with the Phineas and Ferb theme song, and multiple videos have since been “duetted” by other prominent creators in the TikTok community. The most popular of these has been a duet chain of the Perry the Platypus theme that has garnered more than 7 million views, with other TikTokers beatboxing over Nolan’s a cappella or adding Perry’s signature clicking noise.

What she never imagined is that her TikToks would be noticed by show co-creator Dan Povenmire, who duetted Nolan’s cover of the Doofenshmirtz Evil, Inc. jingle in his Doofenshmirtz voice, or Phineas voice actor Vincent Martella, who dueted Nolan’s cover of Isabella’s song “City of Love.” Since then, Nolan and Povenmire have collaborated on a number of other videos, like the Doof duet “Evil Love” and a shorter piece involving the beloved character Balloony.

“Dan is great. I think of him as my ‘TikTok father,’ and he’s the only reason I have any sort of clout,” Nolan said. “I’m so thankful he takes the time to comment on my videos or even collaborate with me.”

Nolan said it was his involvement in her growing Internet career, in fact, that motivated her to create more Phineas and Ferb content. This connection was particularly personal to Nolan, as Doof is her favorite character from the show.

“You see him as the evil villain who’s also trying really hard for his daughter. He had a rough childhood, and he just wants to make sure everything that happened to him won’t happen to her,” Nolan said. “And with her help, he later realizes he’s not actually evil, and everything he’s been doing has just been a minor inconvenience to others in Danville. At the very end of the series, he realizes, ‘okay, well, that’s good.’ It’s such a unique character arc to have.”

While campus COVID-19 guidelines prevented Nolan from hosting a watch party for the movie’s debut, she celebrated with a Zoom countdown with Povenmire and other special guests from her TikTok career. Now that the movie is out, she plans to do even more.

“I still want to upload a cappella covers. There’s so many new songs to work with that will be relevant and popular,” Nolan said. “I’m excited to do new stuff with that content and see Phineas and Ferb continue to thrive.”

Nolan emphasized that, with so many potential directions she could’ve steered the nostalgia factor in her videos, Phineas and Ferb stood out to her for its musical appeal.

“What’s so unique is that there’s songs in every episode. Even when a show itself is really memorable, a song is something you never forget,” she said. “If it sticks with you, it sticks with you forever, and you know it 20 years later when you haven’t thought about it in so long. Phineas and Ferb is basically a 10-year-long musical in my life, and I’ll never forget it.”