Ke’Shawn Vaughn is gone. Who is up next in the Vanderbilt backfield? 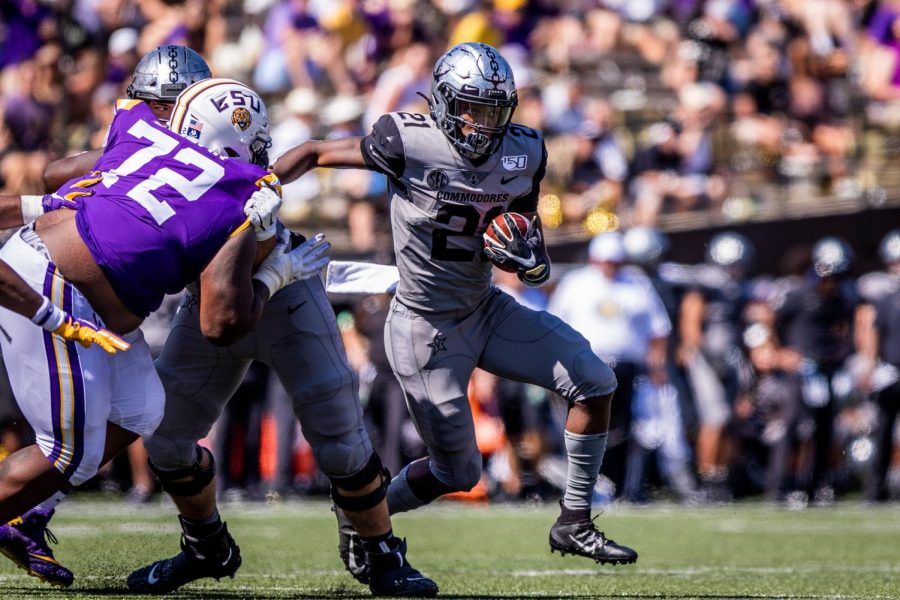 In each of his six seasons in Nashville, Vanderbilt head coach Derek Mason has had the privilege of a workhorse running back. He arrived in 2014 with Vanderbilt’s all-time leading rusher, Ralph Webb, and brought Nashville native Ke’Shawn Vaughn back to the Music City for two bell-cow years.

But this year will be much different for the Vanderbilt backfield. There is no clear-cut starter and likely no workhorse back on this roster. Instead, the Commodores will roll with a running back by committee that collectively has experience and versatile skillsets. With a committee comes optionality and depth. And new offensive coordinator Todd Fitch explained to the media on Wednesday that depth will play a key role in Vanderbilt’s success on the ground.

Both Mason and Fitch have a track record of relying heavily on their running backs. In his time on West End, Mason has run the ball about 51 percent of offensive plays, while Fitch’s offenses with his former team, Louisiana Tech, ran the ball 49 percent of offensive plays. Fitch’s offense will likely be more spread out than Commodore fans are used to and downfield passing will be more of a focal point, but Vanderbilt’s inexperienced quarterbacks will benefit from a healthy dose of running the football.

Fitch made it clear Wednesday that he is still in the process of learning his team and understanding how each player can be put in the best position to succeed. Once he does so, he will need to figure out how to allocate the nearly 200 carries that are up for grabs this year. Thankfully, he has a versatile set of backs at his disposal who bring a blend of experience, speed, power and creativity.

Keyon Brooks is coming off of a very impressive freshman campaign. When upperclassmen Jamauri Wakefield went down with an injury early last season, Brooks emerged as the clear-cut second running back to Ke’Shawn Vaughn, registering 56 carries and 309 total scrimmage yards on 4.5 yards per attempt.

Brooks may be the most polished runner in the Vanderbilt backfield. At 6’1”, he possesses a solid combination of size and speed that makes him unique. He is comfortable running between or outside the tackles and uses his shiftiness and speed to create difficult matchups for the defense.

The key to unlocking Brooks’ potential will be getting him in space. He hits holes quickly and has active feet, making him difficult to bring down in one-on-one scenarios outside of the tackles. Fitch has been impressed with all of Vanderbilt’s running backs’ abilities on the perimeter, and with Brooks’ exceptional second-level speed, he has big-play potential if given space to operate.

Another area that will keep Brooks on the field is his ability to catch passes. Fitch wants to run a more spread-out offense with his running backs often rotating out into the slot position. And with Brooks’ solid hands and good speed, he could excel in this role. Last season he showed his ability to work out of the screen game as well. With young quarterbacks, Fitch will look to take pressure off of his passer whenever possible, and with Brooks’ solid feel for the timing necessary in the screen game, he can turn screens into big plays.

After suffering a season-ending injury after just one carry last season, Jamauri Wakefield returns to Vanderbilt as a fifth-year senior whom Commodore fans should not forget about. While no starter has been named, Mason alluded to Wakefield, alongside Brooks, leading the way for the Vanderbilt backfield.

“That one-two combination in the backfield of Jamauri Wakefield and Keyon Brooks should be a nice one-two punch,” Mason said on Wednesday.

Like Brooks, Wakefield has terrific size at 6’1” and 223 pounds, but he has a slightly different skill set. With his stature and ability to bounce off of defenders, he can act as the bruiser back to complement Brooks’ speed and Marlow’s versatility. In his sophomore season (2018), he was given 78 carries, third on the team, and totaled 404 yards from scrimmage.

While he lacks the big play potential of Brooks, Wakefield is consistent and reliable, especially on third downs. He can be extremely effective in short-yardage or goal line situations by putting his head down and grinding out 4-5 yard rushes. He uses his solid frame to stay on his feet and generate yards after contact. Considering this skillset, he projects to mainly be used between the tackles. Although he does not have elite speed, he has a quick stutter step that helps him navigate properly through holes in the offensive line.

A forgotten aspect of his past contributions lies in his kick return game. In 2018, Wakefield was first in the SEC in kick returns and in total kick return yardage. He ranks seventh in Vanderbilt history in yards per return and top 10 in total return yardage in just 15 games played. If he continues to be used in this role, he will be able to give the young Commodore offense a field position advantage.

Arguably the biggest wildcard of the group, Ja’Veon Marlow enters his third season on West End finally fully healthy. While he has only carried the ball 15 times in his two years, Marlow has a versatile skill set that intrigues Fitch.

“In this [offensive] system, we will put our backs out in the slot,” Fitch said Wednesday. “He [Marlow] definitely would be a candidate [for that] because of his good lateral mobility, and it seems like he has a pretty good feel and sense for the game. And that’s what you need when you are playing in the slot.”

Marlow is someone the Commodores have used as a Swiss Army knife out of the backfield. He is capable of running up the middle and outside, but he thrives in creative offensive sets that allow him to use his speed to move the defense. He excels in sets that line him up out wide and could be the recipient of several pitches, tosses, end-arounds or even wildcat formations this season. Although he is slightly smaller than Wakefield and Brooks, as an accomplished high school weightlifter and sprinter, he brings unique athleticism to the Vanderbilt backfield.

For a team that lacks depth at many positions, Mason and Fitch have plenty of talent to work with this season in the backfield. Barring injury, Brooks, Wakefield and Marlow will likely combine for upwards of 250 carries. But Mason has been impressed by freshmen Rocko Griffin, and junior Mitchell Pryor returns after seeing action in nine games last season. While versatile as a group, each back has their individual weaknesses. It will be important to view the backfield as a collective unit that, if used properly by the coaching staff, could be very successful. It is a dynamic and versatile group, and if each back is used a healthy amount, defenses will constantly be guessing and the Commodore offense will be maximized.