The Vanderbilt Hustler • May 31, 2020 • https://vanderbilthustler.com/2020/05/31/thornton-youre-the-loudest-when-youre-silent-in-times-of-injustice/

THORNTON: You’re the loudest when you’re silent in times of injustice

Simply not participating in racism or hashtagging your IG story “BLM” doesn’t cut it and never has. 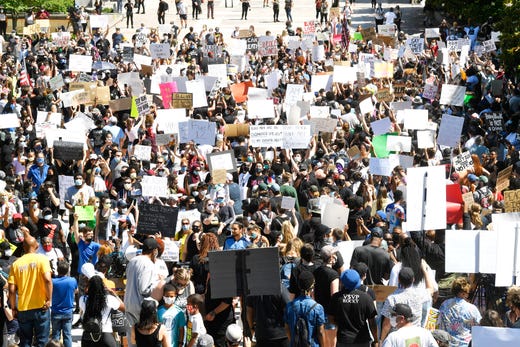 Protestors at the 'I Will Breathe Movement" on May 30, 2020. (The Tennessean/Larry McCormack)

We’ve seen you dance to Black music at Friday night parties. We’ve heard you chant the n-word just because “it was in a song.” We’ve heard you force Black slang into your vernacular. We’ve heard you cheer on our football, basketball and baseball teams that wouldn’t be half as good as they are without their backbone of Black athletes. So why haven’t your Black friends seen you support the Black Lives Matter movement? Why haven’t we seen you as outraged as we are? Why have you chosen to remain silent? Or do you only participate in Black culture when it’s on-trend and convenient?

There have been three high-profile murders of unarmed Black people that have made national headlines throughout the month of May. Their names are Ahmaud Aubrey, Breonna Taylor and George Floyd. Ahmaud’s murder reminded us that we cannot run while Black. Breonna’s reminded us that we are not safe in our own homes. And George’s reminded us that going to buy groceries may cost us our lives.

There are two other recent cases that have made headlines but have not gotten nearly as much attention: Sean Reed’s and Tony McDade’s. Sean’s murder was filmed on his Facebook live stream after he was pulled over by the police on May 6, 2020. Tony was a Black transgender man gunned down without warning by Tallahassee police on May 27, 2020.

These five people are the latest additions to a long string of hashtags that have both minimalized and memorialized the lives that they lived and the ways in which they were taken. This string of names gets longer every day. However, since these cases have exploded on social media, the forgotten victims who never received justice have flooded my Twitter timeline. Now, every time I open any social media app, I am reminded of another murder of someone who could’ve easily been me. And yet, in most cases, their lynchers still walk free.

Your Black friends advocate for these lives during the school year and then show up to class like nothing happened. Your Black friends are reminded with every Black murder that this country does not care about us, yet we’ll say “here” at lab and try to forget. We see your responses too, on and off campus, whether it be  “neutrality,” like retweeting our anti-brutality posts with the infamous “Not all cops are bad!” and hashtagging it “BlueLivesMatter,” or passivity, like speaking out against the riots and protests turned violent but not against the loss of Black lives that caused it. We see it when you complain that you can’t laugh at videos on TikTok because your “For You Page” is being flooded with calls to action against brutality and you’re forced to break the veil of “America the great.”  And we see it when you minimize the movement to performative activism like Instagram chain stories, with the caption “#BLM, tag 10 friends!”
Merely posting three letters to advocate for our rights as valued citizens is not enough and never has been.
While some may say that using a voice to actively speak out against injustice on social media, even with small platforms, does nothing, I’m here to say that it does. It not only garners attention to the mechanisms that can enact change, but it publicly lets your Black friends know that we are not alone in our fight for justice.

I’m not asking you to tweet #BlackLivesMatter with a Black power fist emoji and call it activism. Even if you can’t show up to the Nashville protests or the ones in your home cities, I’m asking you to show up for your Black friends. Advocate for our value as citizens. Donate 10 dollars to bailout funds for protestors and other Black grassroots organizations. If you can’t donate, I’m asking you to sign and circulate petitions to charge the officers who continuously take Black lives in cold blood. I’m asking you to write the representatives of cities every time you see another Black-life-turned-hashtag on the news. I’m asking you to not elect officials who have continuously turned a blind eye to Black murders at the hands of our law enforcement. Being quietly non-racist does nothing for the state of our country or for the safety of your Black friends. In the words of activist Desmond Tutu, being neutral in times of injustice takes the side of the oppressor.

To the non-Black people who have taken the torch to speak out against injustice, I encourage you to move beyond the restraints of optical allyship and strive to break the systems of power that oppress. Recognize your privilege and use it to amplify the voices of the ignored. Finally, don’t center the narrative around yourself as a non-Black individual or label this as a “POC issue.” Doing this not only takes away from the severity and racial-distinctiveness of the situation, but it actively silences the victimized. Stop saying “person of color” when what you mean to say is Black. Police brutality is the outcome of slave patrollers turning in their whips for police badges after abolition, yet 155 years later, the lynchings haven’t stopped. America’s law enforcement is built on white supremacy, and while white supremacy affects all people of color, the direct modernization of slave norms is not a “minority issue” or a “Black and brown issue;” it is one that targets specifically African Americans with the goal to keep us in-line, in-check, or, in other words, enslaved.

Stop saying that you’re “shocked” or “astonished” that atrocities like this still happen in our country, much less our generation. Trayvon Martin was killed when we were in middle school. We are in college now and nothing has changed. There is nothing to be “surprised” about.

Moreover, you need to understand that every viral video of Black murder and abuse prompts emotional trauma and is triggering. While you may aim to “raise awareness,” by posting them, these videos only increase the dehumanization of Black people. Lastly, don’t limit your “pro-Black” activism to times of tragedy. Educate yourself with works on antiracism by Black writers in order to incorporate allyship in your life and your actions, past this week’s protests. Find a local Black radical grassroots organization and attend their next meeting. Black lives matter every day while we are alive, not only when we are dead.

And to the Black people exhausted by the displays of Black death and Black trauma on every social media app and news outlet, I hope you are taking time to rest. Author James Baldwin once said to be Black and relatively conscious in America is to be in a constant state of rage. Yet, I am asking you to smile today in between your activism, and remember that your contentment, your happiness and your life itself, is an act of rebellion.