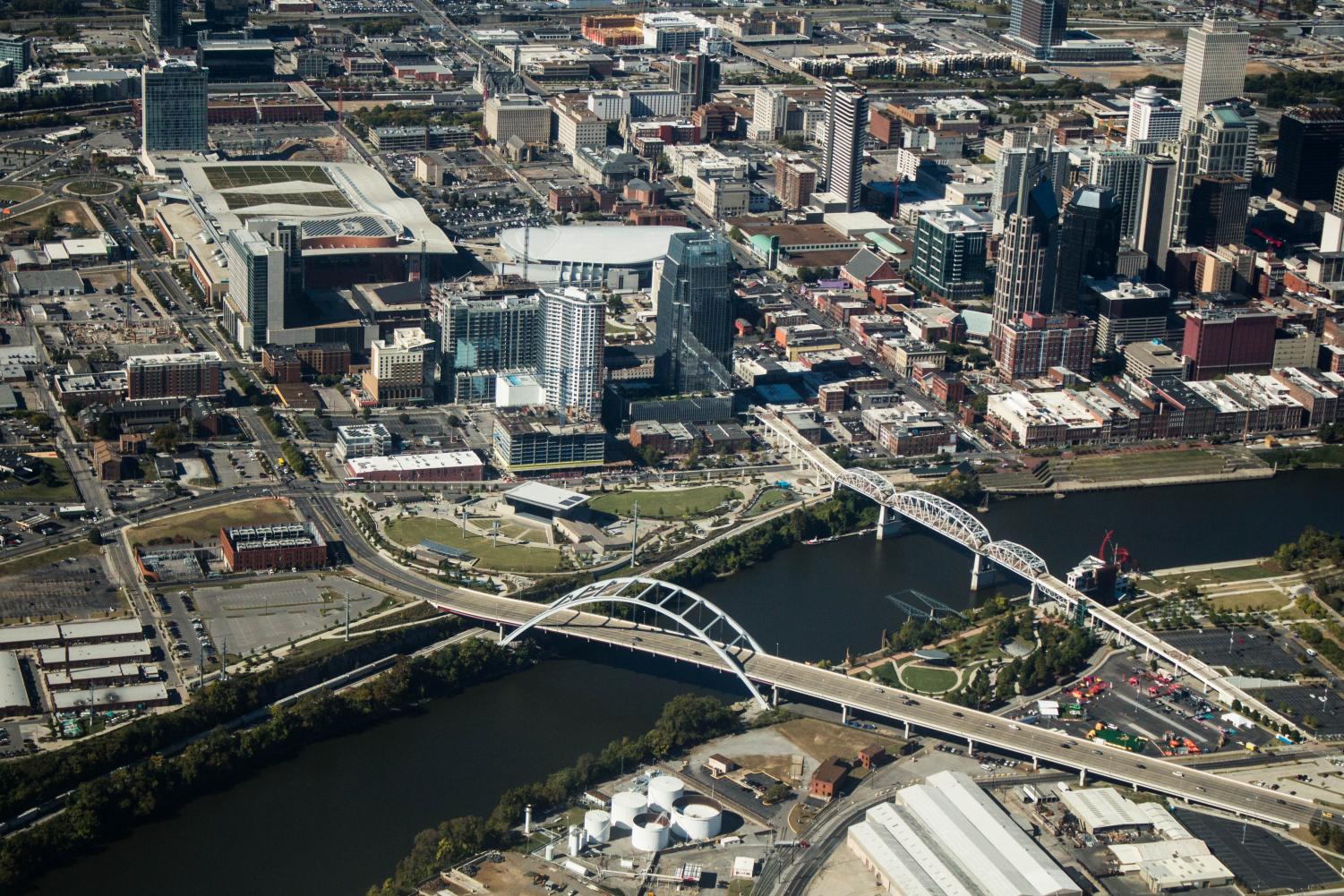 The Hustler will continue to update this story with information about the protests.

The Hustler will be following the protests that are occurring in Nashville. These protests began after the death of George Floyd and the protests in Minneapolis thereafter. This movement has spread to different cities including New York City, Denver and now Nashville.

Governor Bill Lee announced that the National Guard would remain mobilized and an 8 p.m. CDT curfew. He also announced that the Department of Safety and Homeland Security, Tennessee Bureau of Investigation and local law enforcement authorities would work together to investigate the “unlawful incidents” that occurred on May 30, 2020.

Metro Nashville PD reported as of 4:06 a.m. that they counted 30 businesses and buildings damaged by protestors on the night of May 30.

Governor Bill Lee authorized the mobilization of the National Guard in response to Nashville protests that have become “violent, unlawful.”

At the request of Mayor Cooper, I am authorizing the National Guard to mobilize in response to protests that have now taken a violent, unlawful turn in Nashville.

A 10 p.m. curfew is in effect. Those harming our city should leave.

I have signed Executive Order No. 9, declaring a state of civil emergency.

Riot police are back to the courthouse and using tear gas and flash bangs.

Riot cops just came to guard the Nashville courthouse using tear gas and flash bangs to get people back pic.twitter.com/kPzUgRl3GL

The courthouse is now on fire.

BREAKING: A fire has started inside the Metro Nashville Courthouse as protests continue in downtown Nashville this evening. We continue to have live coverage on air and on the News 4 app. https://t.co/vuetXt2BPd pic.twitter.com/ufbkmqFBAo

IMPORTANT: We’ve temporarily suspended service and shut down WeGo Central to protect the safety of riders and drivers. We apologize for the inconvenience and will let you know when regular operations resume. Stay safe.

The statue of Edward Carmack at the Capitol has been brought down by protestors.

THE STATUE HAS FALLEN #Nashville pic.twitter.com/tA1nfvosw3

Police are moving back from the courthouse building after protestors break windows. The building also serves as the city hall.

BREAKING: rioters are now throwing rocks through and smashing windows at Metro Nashville’s courthouse, which is also city gall pic.twitter.com/CRtXHK7CKX

Bridgestone Arena, where @PredsNHL play and Nashville’s biggest concerts occur, is being vandalized with anti-cop graffiti as the crowd heads back down Broadway pic.twitter.com/NcqvTJk7p6

Protestors are beginning to throw rocks and trying to push the police line at the precinct back.

Rocks are now being thrown at the cops and the precinct as protesters try to push back on the police line pic.twitter.com/T08F1HGSDa

Central precinct commander Gordon Howey says multiple people have been arrested, and he believes that no pepper spray has been used per The Tennessean.

Nashville protests begin to show signs of violence per Natalie Allison at The Tennessean.

Protesters smashed in the windows on this Nashville police cruiser. Also lit fire but a cop quickly put it out. Glass is flying at us as they keep smashing it pic.twitter.com/gxbiQ1PiWF

NEW: Protesters and Nashville police are having physica altercations in front of Central precinct downtown. Pepper spray may have just been deployed according to some pic.twitter.com/Fs0xEo2tuu

The march, with thousands of demonstrators, has thus far been peaceful. Organizers of the event have told the attendees to remain peaceful.

Mayor John Cooper will attend an “I Will Breathe” rally, organized by leaders and advocate organizations in Nashville’s Black Community. The rally, protesting police brutality and racism, is scheduled to start at First Baptist Church Capitol and will reach Legislative Plaza and will take place from 3 p.m. to 5 p.m. CDT. A march is scheduled to follow the rally.

More than 24 cities continue to have protests.

Now ex-officer Chauvin has been arrested and charged with third-degree murder and second-degree manslaughter.

Vanderbilt posted the following statement regarding the incident:

“The recent events in Minneapolis that led to the death of George Floyd have once again cast a spotlight on the challenges that African Americans and people of color face in this country. Mr. Floyd’s terrible, unnecessary and untimely death, as well as his treatment during his last seven minutes of life, again raises the existential question of whether some lives are more valued than others.

Life is to be cherished and its protection falls on the shoulders of all of us, but even more importantly, on those given the authority to protect and defend our lives and laws.

In all our roles as educators, scholars and stewards of the best ideas and values of a civil society, we must be part of the national chorus that cries out that all lives are valuable. Furthermore, as a community we should question why incidents such as these continue to occur, and what role we can play in creating a fairer and just world.

At Vanderbilt, equity, diversity and inclusion are a major and treasured part of our ethos, and we do not tolerate racism, prejudice, hatred or violence in any form.”

Protests continued in Minneapolis and eventually escalated to the burning of the Minneapolis Third Precinct police station. Other protests broke out in other cities including Denver, Colorado; Columbus, Ohio; Phoenix, Arizona and New York City, New York.

Protests in Minneapolis escalated as Target and other local businesses were raided.

The four officers involved in the incident were all fired by the Minneapolis Police Department. Thousands gathered to protest in Minneapolis.

George Floyd, 46, was involved in an incident with four police officers on May 25, 2020 in Minneapolis, Minnesota. Four police officers restrained a handcuffed Floyd with one officer, Derek Chauvin, placing his knee on Floyd’s neck. Eventually, Floyd was taken to the Hennepin County Medical Center and was pronounced dead 9:25 p.m. later that day. The video of the incident has since been widely shared across social media and may be disturbing to watch.