The Vanderbilt Hustler • May 29, 2020 • https://vanderbilthustler.com/2020/05/29/blair-graduate-chris-mann-helps-us-answer-the-question-what-does-quarantine-sound-like/

Blair graduate Chris Mann helps us answer the question: what does quarantine sound like?

Chris Mann (‘04) has transformed his talent as a classical vocalist into that of a Youtube parody star, redefining his career and bringing unity to his viewers. 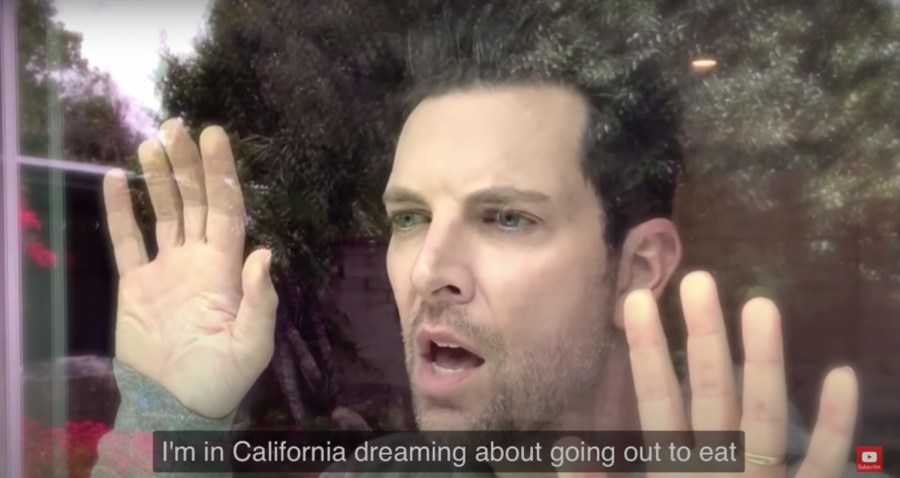 A clip of Chris Mann's "Hello (from the Inside)" showcases the gloomy reality of quarantine.

As Commodores, we are united by our studenthood that consists of long study hours followed by mutilating exams, and we are fortified by the same hope of a light at the end of the tunnel: a successful career. COVID-19 has threatened to extinguish that light for many, but alumnus Chris Mann (‘04) has proved that unexpected circumstances don’t always mean catastrophe. His quarantine experience has illuminated a unique path in his music career, borne in wildly successful YouTube parodies.

Mann graduated from the Blair School of Music with a Bachelor’s of Music in Vocal Performance more than a decade ago. In fact, the year after he graduated, 2004, was the first year Vanderbilt instantiated the Residential College system, so it’s safe to say there have been some changes on campus. Nonetheless, many of the professors who offered him guiding hands still teach aspiring musicians.

“Really, my friends and life-long support system at Vanderbilt have helped me get where I am today. It was priceless,” Mann said. “My voice lessons and performance classes primed me for my future, and I thank Dr. Gayle Shay and Amy Jarman specifically for putting up with me for four years. It wasn’t easy.”

After graduation, Mann moved to New York City in hopes of obtaining a record deal and found regular work singing professionally in churches and choirs. Though the work was competitive, Mann said, he attributes the sight-reading skills that got him the job to his ear training and sight-singing classes at Blair.

Ultimately, Mann aspired for a career in recording, and he developed those songwriting skills with Adjunct Artist Teacher of Piano, Deanna Walker. Walker first met Mann in her Intro to Songwriting and Music Theory class.

“He actually was fairly quiet early in the semester,” Walker said. “At a certain point, I always get students up and around the piano to do some improvisatory singing. Lots of people were jumping in, and he was hanging back, so you can imagine how blown away we all were when he opened his mouth and that unbelievable voice came out.”

Blair is a purely classical music institution, so despite the incredible background training that Mann received, he found himself lacking in some essential areas for any professional vocal artist. He wishes that there had been more acting, songwriting, publishing and dance requirements for his major in Vocal Performance. Instead, he was forced to primarily learn those skills from experience upon entering the industry.

“All of the requirements are highly complex but will affect how you make your money down the road. I’ve played catch-up with my acting and have been lucky to still work,” Mann said. “For example, I played the Phantom in ‘The Phantom of the Opera’ for two years and 700 performances, so I was able to really hone in on some skills there.”

His series of odd jobs have ranged from choir performances to starring as a finalist on the second season of NBC’s “The Voice” to leading in Broadway shows, and overall, Mann’s career is that of a touring musician performing year-round all over the world. That mobile lifestyle is one that was profoundly hindered by the COVID-19 pandemic, so Mann promptly found himself unemployed.

After a mundane and understandably frustrating grocery store trip, Mann himself felt the fear that was paralyzing the nation. He laid his son down for a nap and  began writing what would be the first of many parodies: “My Corona.”

“I had zero expectations at all and put it online for my friends, really. It got 20 million views in 4 days,” Mann said.“I was shocked. So I kept making them to make sure it wasn’t just a fluke.”

Since dropping his first video on his Youtube channel, which now has almost 200k subscribers, Mann has released a number of other viral parodies like “Stay Home Vogue,” “Hello (from the Inside)” and “Daycare Closed.” Despite being a traditionally “serious” vocalist, he was able to adapt and assert his position as a relevant musician outside of his comfort zone.

“In this industry, it’s probably more important to have great fortitude and perseverance than to have great talent, and Chris has it all,” Walker said. “I absolutely love that this honest self-expression turned into something so massive.”

Mann noted that it was rare to see a video with almost exclusively positive comments, yet the global response to “Thank U Frontline” featured hundreds of thousands of people coming together in thanks and goodwill. The biggest media impact that he cites from his videos came from his Adele parody, when British tabloids pleaded that the record-winning artist respond with her reaction to the video, Mann said.

Mann has collaborated with Walker and her husband, Rick Beresford, throughout his career, to the point where the professor has come to consider him “family.” They have been most recently involved with his upcoming release, “Good Days,” which will also feature a pop star from a 90’s boy band.

“That song is about some of the changes Chris has been through and how we all have to keep looking forward, which is crucial if someone wants to stay in the music business,” Walker said.

Yet, despite the challenges of such a sudden change to the status quo of your career, Mann has found that he has been able to rediscover who he truly is as an independent artist. “I’ve never really been this alone with my own devices. I’ve learned that I’ve relied too much on others’ opinions and help in the past,” Mann said. ‘Quarantine took that option away from me, so I’ve ended up allowing my unedited, true voice to come out for the first time, and I wish I’d done that sooner.”

Ultimately, Mann is confident that even in the current climate, aspiring musical professionals at Blair have the skillset to enter the industry, so long as they take advantage of even the smallest opportunities and remain confident in their abilities.

“My advice to anyone serious about a career is to say ‘yes’ to everything, especially in the beginning,” Mann said. “I sang the Alma Mater at my graduation. It wasn’t pretty. I was out really late the night before. But I got through it, and in the crowd of parents was a record label rep who heard me sing that morning.  She helped me get my first manager who then helped me get my first record deal with Sony. So you never know!”