The campaign, kicking off with posters displayed around campus, intends to spread awareness about dining workers’ low job satisfaction as Campus Dining prepares for contract renegotiations in Sept. 2020 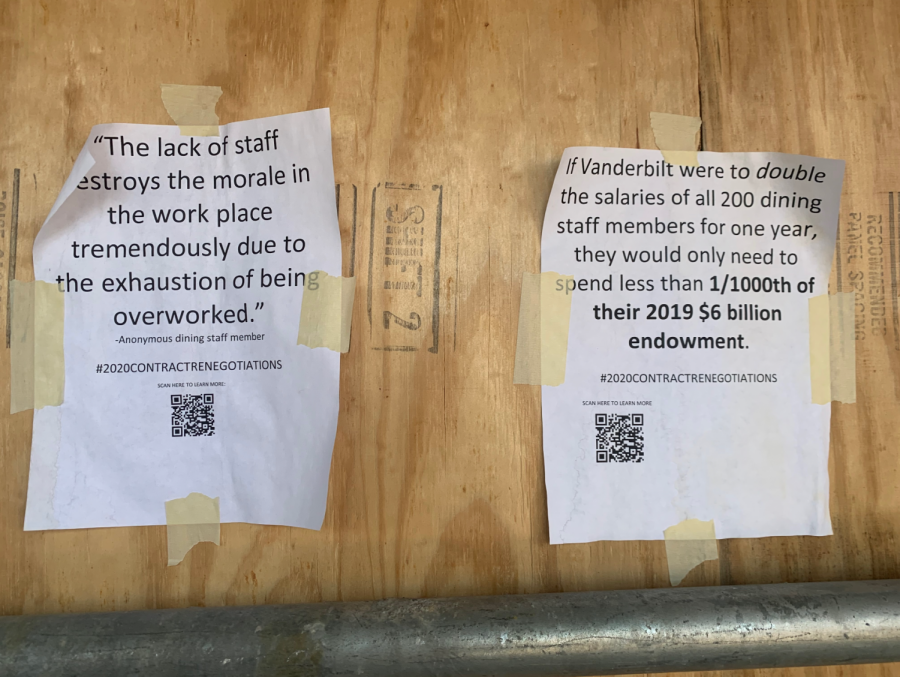 Two posters from the campaign from the bridge to Commons across 21st Ave.

Hidden ‘Dores recently began its campaign to advocate for the improvement of Campus Dining worker rights, installing a series of posters across campus that detail several accounts of job dissatisfaction among dining employees. The posters began circulating in person and online the week of Feb. 20.

Hidden ‘Dores— an activist organization which strives to reduce the barriers surrounding the experiences of marginalized communities—developed its campaign in light of the Campus Dining contract negotiations upcoming in Sept. 2020 and plans to conclude its advocacy work with a protest against the mistreatment of dining workers in April on Rand Wall.

In preparation for the contract renegotiations, a Campus Dining union representative met with the representatives for Hidden ‘Dores and Vanderbilt Young Democratic Socialists of America and called upon the organizations to support the dining staff. Hidden ‘Dores felt that the work coincided with its mission statement and sensed that its established following of students could allow the organization to influence the Vanderbilt administration’s policy decisions. Shortly thereafter, the organization began to arrange its campaign.

In Sept. 2019, Hidden ‘Dores administered a survey of 35 dining workers to measure the staff’s job satisfaction. The organization initially passed out physical copies of the survey to dining workers in Rand but stopped after 12 distributed copies due to a worry of pushback from the dining managers.

“We went to Rand first thing in the morning and started passing out this survey, and the managers that were in there were getting very anxious and watching us, kind of following us a little bit, so we stopped,” Tharpe said.

After Hidden ‘Dores decided against the direct distribution of its surveys, a Campus Dining staff member reached out to the organization, requested copies of the survey and assured that he would share the survey with his coworkers.

The survey prompted each employee to rate their satisfaction with their pay, hours, and the amount of respect that they feel their managers have for unique circumstances on a scale of one to ten. Of the 35 respondents, the average ratings for pay and respect from management were 3.0 and 2.7, respectively.

The average rating for satisfaction with hours was notably higher at 6.1. Additionally, 95 percent of respondents noted that they did not feel that their wages were sufficient for their living needs. The survey concluded with an empty section for workers to leave any final comments that they had about their job quality. Many of these comments appeared as quotes on the posters noted above.

“Workers are overworked and expected to spread thin to cover under staffing issues year after year,” an anonymous dining employee said, according to a poster. “Each employee does at least two people’s jobs if not more.”

Since the launch of its awareness campaign, Hidden ‘Dores has seen a supportive response from the Vanderbilt student body, Tharpe said. Tharpe indicated that attendance at Hidden ‘Dores general body meetings has grown since the poster installations, and the number of followers on the Hidden ‘Dores Instagram account has risen from about 270 to 400 followers.

Although the organization has invoked a strong student response, Hidden ‘Dores has yet to prompt a response from the administration.

“In the coming months, Vanderbilt will be entering into collective bargaining negotiations with LIUNA, the union that represents Campus Dining employees. As always, we engage in those conversations to seek mutually workable solutions to issues like this,” Interim Associate Vice Chancellor for Human Capital and Business Services Laura Nairon said in response to a request for comment about the Hidden ‘Dores campaign.

Concerning the next steps in its campaign, Hidden ‘Dores has organized an “Awareness Week” to inform students about Campus Dining staff rights during the final week of March. The week will culminate April 1 in the screening of a student-made documentary about the campaign for dining worker rights. However, Tharpe’s ultimate goal is for Hidden ‘Dores’ marketing and educational work to generate a large showing at its protest in April.

“Our whole idea is to show Vanderbilt that whatever demands that they make, the student body stands behind them,” Tharpe said.