The storm, which hit in the early hours of Tuesday morning, led to significant damage across the city and two deaths in Davidson County. 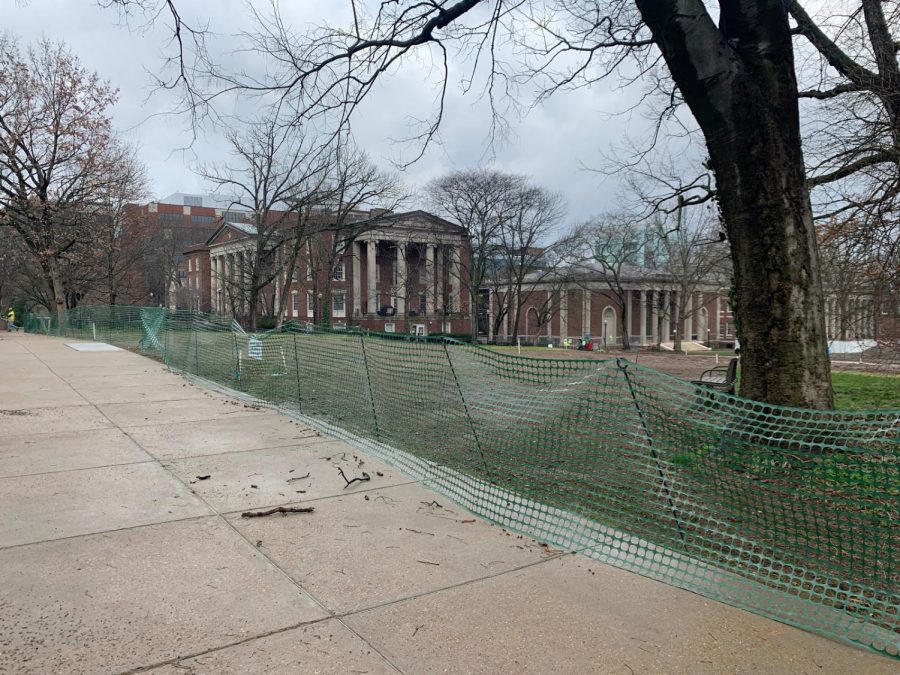 A small amount of debris from the storm is seen on Commons. Campus buildings were unaffected.

Multiple tornadoes touched down in Nashville early Tuesday morning and surrounding counties, leading to at least 19 deaths across four counties and widespread damage to the Nashville, East Nashville and Mt. Juliet areas. Two people have died in Davidson County.

Vanderbilt has reported through significant correspondence with the community that the campus sustained no damage. The only evidence of the storm visible on campus is some fallen branches and debris, which Plant Operations was cleaning up at 8:30 a.m. Tuesday. Nashville, however, is feeling the effects of the battering, which include Super Tuesday voting relocations, the closure of all Metro Nashville public schools Mar. 3 and public transport cancelations and reroutes.

At 12:30 a.m. Mar. 3, Vanderbilt sent the following AlertVU notification to the Vanderbilt community:

A second message was sent out by the AlertVU system at 1:08 a.m.

“The tornado threat has passed for the Vanderbilt area, and the warning is CANCELLED. Severe weather may still be possible. Please continue to monitor local weather reports.”

“There is no damage reported to the Vanderbilt campus at this time from the overnight tornadoes. Our hearts go out to our neighbors across Nashville affected by this tragedy. We are continuing to assess the storm’s impact and checking in on our students, faculty and staff.”

Interim Chancellor Susan Wente followed up the release with an email around 9 a.m. to the community, reiterating the message that the campus did not suffer any damage and that the university remains open. Dean of the College of Arts & Science John Geer also sent an email to Arts and Science undergraduate and graduate students asking students to report personal impacts of the storm to the university.

Dean of Students Mark Bandas sent another email at 12:10 p.m. to students emphasizing the resources available to assist students. The email encouraged affected undergraduate and graduate students to contact the financial aid office if they have financial aid concerns.

Popular student destinations affected by the storm include the Soda Parlor, Burger Up and Basement East.

As reported by the Tennessean, Governor Bill Lee asked only essential state personnel to go to work on Tuesday in the Nashville area. Metro Public Schools are also closed on Tuesday. WeGo Public Transit has canceled some routes and implemented detours for others. Lee also declared a state of emergency and is working with the White House regarding potential assistance from the federal government.

Organizations including the Red Cross, United Way, Community Foundation of Middle Tennessee and Hands on Nashville are providing opportunities to provide tornado relief through volunteering and donations.

Tennessee also participates in Super Tuesday, a democratic primary election day in which about a third of delegates are assigned. Four precincts were reassigned voting locations as a result of the storm and voting started an hour late in Nashville and Wilson County, according to The Tennessean.