STERN: In CJ Rodriguez, Commodores have their next great catcher

Rodriguez is batting .344, good for third on the team, and has eight RBIs and 11 hits on the season as well. 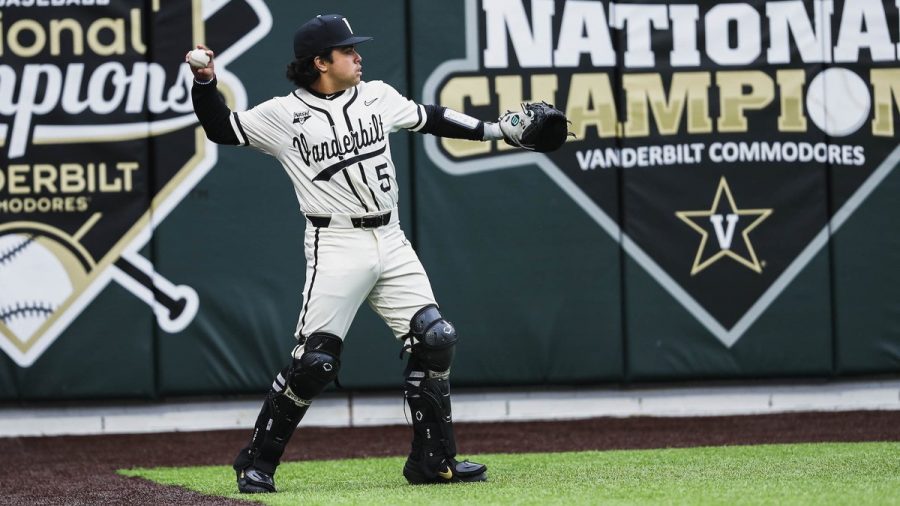 CJ Rodriguez warms up before the Commodores take on the Saint Louis Billikens.

On a dark, cold, snowy February night in Nashville, nobody shined brighter than CJ Rodriguez.

The freshman catcher found himself back in the two-hole for the Commodores against the Saint Louis Billikens after a brief absence from lineup. In the early games of the season, Rodriguez showed promise with his bat and his glove, but Coach Corbin wanted to let his young catcher get some rest the past couple of games. But after Wednesday’s 10-2 victory against Saint Louis University, it’s clear that the freshman is here to stay.

Behind the plate, Rodriguez looked remarkable. In the second inning, opposing catcher Cam Redding decided to test the arm of Rodriguez. The freshman responded by throwing a strike to fellow freshman shortstop Carter Young, who secured the out with a strong tag.

This was a key play for the Commodores. In a scoreless game in the second, a Billiken runner in scoring position with no outs would have spelled trouble for the VandyBoys. After Rodriguez’s throw, the Commodores responded by scoring five runs in the bottom of the inning. One of those runs was plated by none other than Rodriguez himself, who batted in sophomore Isaiah Thomas on a well-hit groundout to the second baseman.

Rodriguez followed this up with several more impressive plays behind the plate. After a ball in the dirt trickled by the young catcher, baserunner Matthew Happ tried to take advantage. This, once again, proved to be a poor decision, as Rodriguez quickly picked up the ball and threw another strike, once again to Young, who delivered another great tag to catch the opposing shortstop stealing.

“[I was] just trying not to overthrow,” Rodriguez said, when asked about his impressive throws to catch two separate Billikens stealing. “It was cold tonight.”

In the same inning, Rodriguez framed an Ethan Smith fastball up and away to Cole Smith, presenting the pitch as strike three. The next batter struck out on a slider in the dirt, which was secured by an impressive block and tag by – you guessed it – Rodriguez. He continued to impress with his pitch framing ability the rest of the game, most notably securing an inning-ending strikeout in the seventh to help freshman righty Nick Maldonado get out of a jam.

“I take a lot of pride in [my pitch framing],” Rodriguez said after the game. “The more pitches I get for my pitcher, the less runs we give up.”

Rodriguez’s well-rounded defensive prowess was vital for the Commodores, stealing strikes, blocking balls in the dirt and keeping runners out of scoring position.

“We train a lot,” Rodriguez said. “At the end of the day, it just becomes muscle memory… It’s second nature in the game.”

Rodriguez wasn’t just impressive behind the plate. The freshman also picked up two hits in the game and two RBIs. One of these was a well-struck line drive to left field to score a run, and the other was a hard grounder that made it past the first baseman.

One of the biggest question marks for the Commodores going into the 2020 season was their offense. Six of the nine starting hitters for the championship team had left for the draft, and it was clear that a multitude of young players were going to have to step up. So far, we’ve seen many underclassmen shine in their new roles: Isaiah Thomas, Parker Noland, Justyn-Henry Malloy and Carter Young have all positively impacted the team. But just 10 games into his career, Rodriguez has been one of the biggest contributors to this team regardless of age. His .344 batting average is third on the team, and his .833 OPS is impressive for a player at any position, and even more so for a freshman catcher.

Besides Rodriguez, a number of Commodores showed off on Wednesday. On offense, Austin Martin hit two home runs, and Ty Duvall had three hits. Starter Ethan Smith pitched five clean innings, striking out seven. Nick Maldonado struck out five in two innings, and junior Erik Kaiser struck out all six batters he faced, getting his fastball up to 96. But Rodriguez stood out amongst his peers thanks to his well-rounded performance, both behind the plate and in the batter’s box.

It’s early into his career, but Commodore fans should be excited. There’s a long list of great catchers who’ve attended the University, and CJ Rodriguez is looking like the next name on that list.