Vanderbilt swept the Illinois-Chicago Flames behind a strong outing from lefty Jake Eder, who secured his first win of the season. 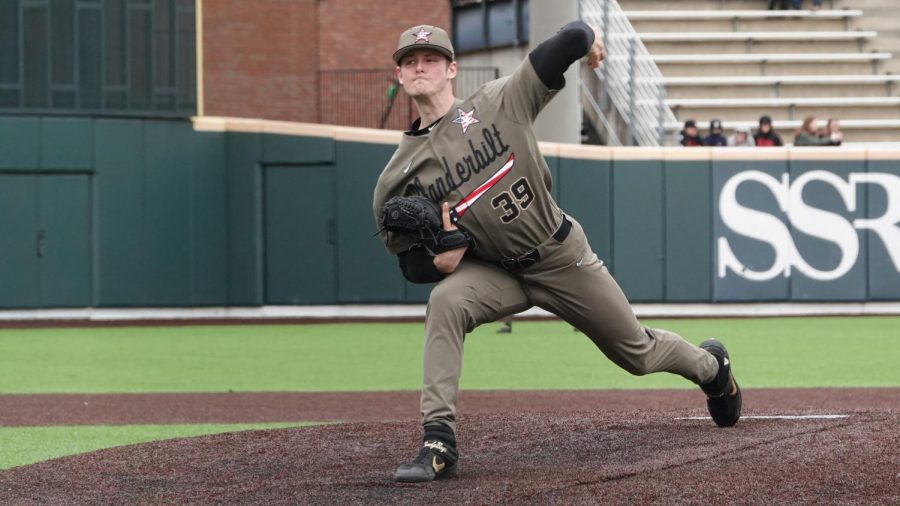 The Vanderbilt Commodores completed their first weekend sweep of the 2020 baseball season, defeating the UIC Flames, 5-2. While the offense was able to put runs on the board, the real story of this game, as it was for much of the weekend, was the starting pitching. Lefty Jake Eder shined in today’s start, allowing just two earned runs and coming up with 11 strikeouts.

“He just got the zone a whole lot more with several pitches,” head coach Tim Corbin said after the game. “I thought he was effective, I thought his intent was very good.”

Additionally, the Commodores were able to get solid contributions from several different batters. Will Duff, Parker Noland, and Isaiah Thomas all had big games at the plate that allowed the Commodores to maintain a relatively safe lead for most of the day.

Eder came to the mound hoping to make up for his previous outing, in which he only lasted 3.1 innings in the Commodores loss to Cal Poly. After the game, Coach Corbin praised Eder for his preparation this week and Eder was eager to get another crack at the starting job.

“I really changed my mentality, so it felt good to win [the game],” said Eder about overcoming his early season struggles.

The first inning went relatively smoothly for the junior left-hander. He struck out the first batter he faced in just four pitches. Then, after walking the second batter, Eder struck out the third and was the beneficiary of a great defensive play, as Ty Duvall threw out the baserunner as he attempted to steal second.

In the bottom half of the first, Vanderbilt was able to make some noise following a Cooper Davis walk and Will Duff single that sent him to third. Yet, as has often been the case in the early part of this season, the bats dried up after that.

Austin Martin promptly grounded out into a double play that allowed Davis to score, but it was followed up by another groundout by Duvall to end the inning. Although Vanderbilt had the 1-0 lead, it still felt like there were several runs that were potentially left on the board.

Eder followed his good first inning with an even better second by quickly striking out the first two batters of the inning before forcing a pop-up to send Vanderbilt’s offense to the plate.

After two quick outs to start the bottom of the frame, Isaiah Thomas came through in a big way, as he smashed his first home run of the year over the left field fence, giving the Commodores the early 2-0 lead.

Vanderbilt’s bats were quiet over the next couple of innings, as no Commodore was able to get a hit. However, Eder continued his dominant outing, as he was able to strike out three more batters in the third and fourth innings.

It seemed as though Eder was un-hittable, however, after striking out the first two batters in the fifth, UIC’s Garrett McCarthy managed to get to first base on an infield single, the Flames’ first hit of the day. Fortunately, Eder remained unfazed and promptly struck out the last batter of the inning on a nasty off-speed pitch.

In the bottom of the fifth, both Harrison Ray and Cooper Davis were walked, putting the Commodores back in business for the first time in a while. This time, unlike in the first inning, Vanderbilt didn’t let an opportunity slip away.

Will Duff continued his big day at the plate by hitting a double right down the left field line that sent Ray home and Davis to third. After that, Austin Martin flew out to right, but it was just long enough for Davis to tag from third and give the Commodores a 4-0 advantage.

As good as this offensive production was, Eder would end up running into trouble when he came out for the sixth inning.

The Flames started off the sixth inning with another infield single, just their second hit of the day. Flames catcher Joshua Figueroa then read a Eder pitch perfectly and sent it over the left field wall for a two-run homer.

Although Eder was able to retire the next two batters, the damage had been done. Following his second walk of the day, Tim Corbin came out to the mound and took Eder out, replacing him with Thomas Schultz to finish off the inning. Eder finished the day with 11 strikeouts and only three hits allowed, an all-around great pitching performance.

“One guy sets the tone and the next guy tries to outdo them,” said Corbin about the competition between this pitching staff. “It becomes a lot of competition within the group, but that’s good. It pulls everyone up to a certain level.”

Neither team was able to muster up much offense in their next turns at the plate. However, the Commodores would get their chance to once again break the game open in the bottom of the seventh inning.

Carter Young narrowly missed a home run over the left field pole, but immediately followed it up with a single. Then, after consecutive bunts from Cooper Davis and Will Duff, and an intentional walk to Austin Martin, the bases became loaded for Ty Duvall. However, the Commodores’ offensive struggles resurfaced, as Duvall grounded into a double play, ending an immensely promising inning.

Vanderbilt closer Tyler Brown then entered the game looking for a six out save. After striking out the first batter and forcing a ground out for the first two out of the inning, Brown had to work hard to get the third. He allowed a single to the next batter he faced and then went back and forth with UIC’s Thomas Norton until forcing a fly-out to end the inning. Although it was by no means a flawless inning, it was definitely a good showing for the junior reliever.

The Commodores got an insurance run in the bottom of the eighth courtesy of a Carter Young single to right field that brought Isaiah Thomas in to give Vanderbilt a 5-2 advantage. Although they would eventually strand three runners, one extra run was all that the Commodores needed.

Tyler Brown came back out for the ninth and, with some help from a sensational Isaiah Thomas catch, retired the last three batters to hand Vanderbilt a 5-2 victory.

The Vandy Boys will be back in action on Feb. 25th when they host Evansville in Nashville.