Commodores blow out the Flames to continue scoreless inning streak

Mason Hickman led the way with 12 strikeouts, and the Commodores continued their home dominance on the bump. 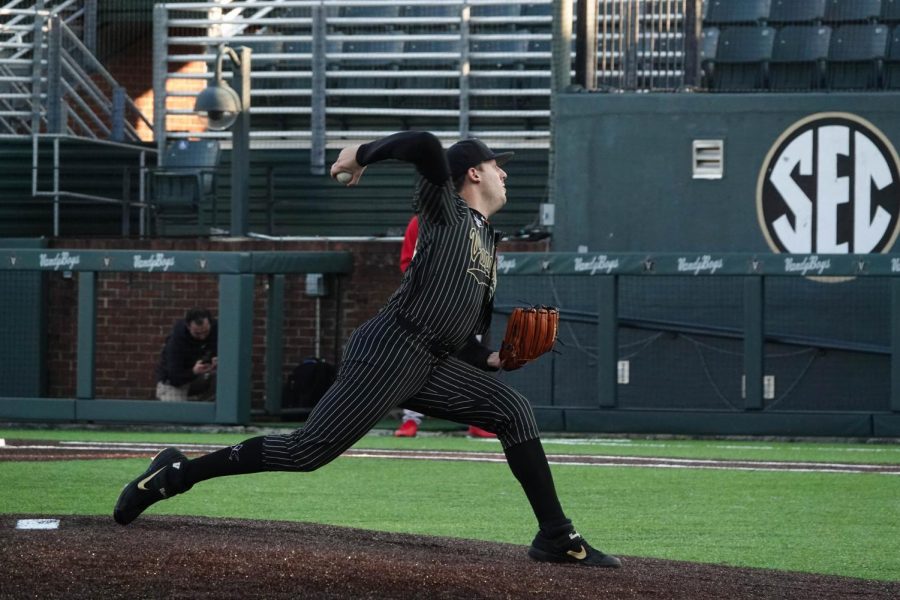 Another day, another shutout.

That’s how things have been for the Vanderbilt Commodores at Hawkins Field this week, the latest of which came Friday night in a 9-0 victory against the University of Illinois-Chicago Flames.

This time, Mason Hickman did the bulk of the damage. The junior right-hander tossed seven shutout innings, giving up just three hits and striking out a dozen UIC batters. The 12 strikeouts tied a career-high for Hickman, matching his total against Belmont a year ago.

“It contributes to the mentality of our staff,” Hickman said. “Every guy’s willing to come in and do their part to make sure that we have the opportunity to win a ballgame. Whether that’s the starter, the reliever coming out of the bullpen, they all have the aggressive mindset of I’m going to try to do my best to compete.”

While the last couple pitching clinics have come at the expense of an offensive show, on Friday night in the sub-40 degree weather, the Commodore bats found a way to get hot.

“Tonight was [Young’s] best night in terms of putting the ball in play firmly, both sides of the field,” Corbin said. “Opposite, pull, doing it with two outs and then of course playing defense. He had a nice game tonight.”

Vanderbilt got on the board early, when Cooper Davis led off the game for the Commodores with a triple down the line in right, stumbling around second base but sliding into third safely without a throw. CJ Rodriguez grounded out to the mound on the very next at-bat to score Davis.

After a scoreless first inning in which Hickman struck out the side, the junior right-hander continued to mow through the Flames’ hitters in the next couple innings. Finally, running into some trouble with two runners in scoring position with just one out in the third, Hickman bared down, striking out Thomas Norton and inducing a groundout off the bat of Nick Lopez to end the inning.

Vanderbilt struck again in the bottom half of the third, this time with some small ball. Young laid down a bunt to reach base safely, and Davis followed it up with a bunt single of his own. After Young advanced to third, Rodriguez drove him home with a sacrifice fly to deep center, doubling the lead.

Before the Flames even had time to warm up in the dugout, they were back on the field thanks to a quick shutout frame from Hickman. That’s when the Vanderbilt bats really went to work. Austin Martin’s single deflected off Norton’s glove at third to give Vanderbilt a baserunner, and Ty Duvall laced a double into the right-center field gap before Malloy walked to load the bases with nobody out. Each of the next four hitters drove in a run of their own. Parker Noland and Young provided the hits—the latter of which came on a double down the left field line—and groundouts from Isaiah Thomas and Harrison Ray aided in the four-spot to give the Commodores a commanding 6-0 lead.

Vanderbilt tacked on another run in the fifth with a couple hits from the heart of the order. Duvall lined a single to right for his second hit of the game, and Malloy doubled to deep right-center to score the designated hitter and pick up his first RBI of the season.

Hickman continued his dominance in the sixth inning, tossing a 1-2-3 frame and striking out two more UIC hitters to bring the Commodores back to the plate. Thomas led off the bottom half of the sixth with a double down the left field line, and Young drove him home on his third hit of the game, a base hit to right field. Consecutive hits from Rodriguez and Martin brought Young around to score and pushed the lead to 9-0 in favor of Vanderbilt.

The seventh inning would be the last for Hickman, and it mirrored the six before it. He retired the side in order, striking out Joshua Figueroa to end his night and tie his career-high with 12 strikeouts. The 6’6″ righty never faced more than four batters in a single inning.

“I think the biggest difference between this week and last week was just staying ahead in counts,” Hickman said. “Last week, I got into a lot of deep counts, and I think part of the reason that happened is just control of the off-speed stuff. It was a lot better tonight, a lot crisper, a lot more in the zone.”

After a scoreless frame for Vanderbilt, the team’s first since back in the second inning, Chris McElvain relieved Hickman in the eighth. The freshman right-hander allowed two baserunners, but worked himself out of a jam.

The Commodores loaded the bases but couldn’t score in the eighth inning, bringing Kaiser out for the ninth. Kaiser made short work of the three batters he faced, closing out the win.

Vanderbilt will look to continue its streak of shutouts and take the series on Saturday night in a rematch with UIC.