The Hustler sat down with the Obama-era official prior to her appearance in the CLS talk alongside John Bolton. 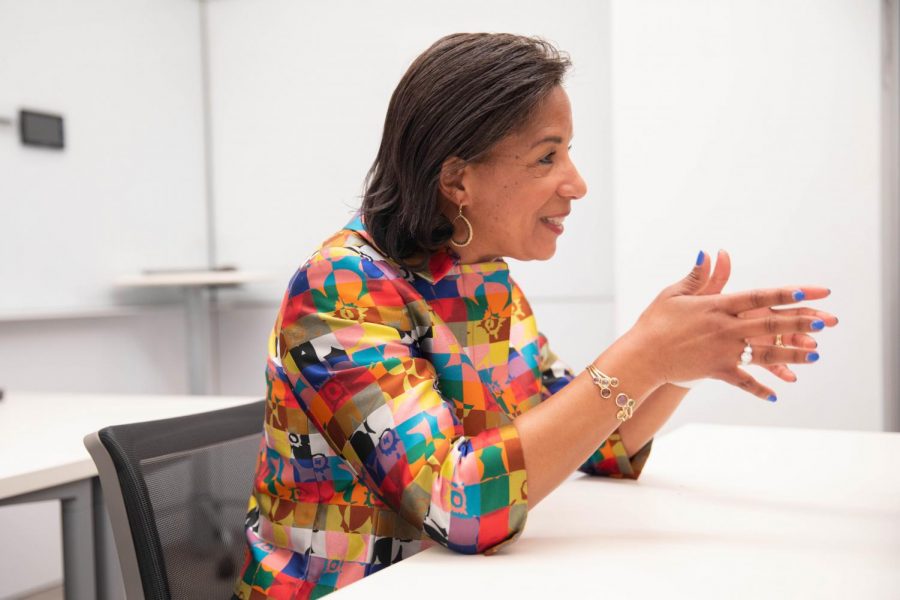 Rice sat down for an interview with The Hustler before the CLS event Wednesday.

Vanderbilt Hustler: When you were working for the Obama Administration, how did you deal with the weight of presidential pressure when making significant decisions?

Susan Rice: Well, I worked for a great boss. So it wasn’t that hard, but the issues are extremely weighty. And you’re dealing with life and death decisions. And that can be stressful. But, I had a boss who had an even temperament, was very thoughtful, had an even temper, didn’t take out his frustrations on the people around him. And for that, I couldn’t be more fortunate.

I had a good team to work with, a good leader, and we had a lot of fun. And that made the tough issues and the pressure more bearable. On a personal level, I relied on family, friends, exercise and, to the greatest extent possible, sleep, to keep me going.

On February 17, you retweeted Tommy Vietor, cohost of Pod Save America, “Bolton DESPERATELY wants you to know he was complicit in covering up an impeachable offense for the low low price of $32.50.” What do you believe is the role of a National Security advisor that witnessed an impeachable offense?

How do you feel about the expansion of Trump’s travel ban to include Sudan, Tanzania, Kyrgyzstan, Myanmar, Eritrea and Nigeria effective Feb. 22?

I think it’s a really unfortunate and fool-hardy decision. I think the initial travel ban was hugely problematic. It was designed to exclude whole swaths of people based predominantly on religion, not based on national security threat. If the concern were terrorism and countries that have exported terrorists to the United States, Saudi Arabia would be on the list as having a preponderance of people involved in 9/11. Most of the countries on the list have never had any foreign national in our country arrested or charged with terrorism.

So the motive behind it in the first instance is suspect. Then you add in a swath is countries that really are not rational in there—none of these look like the other, is one way to put it. And I’m particularly concerned about Nigeria being on the list, as the largest, most populous country in Africa.

Some of the most successful, hard working, well-educated professional immigrants from any part of the world in this country are Nigerian Americans. And to basically lump them all together and limit their ability to be here or come here, it makes no sense to me. Sudan, precisely at the time when there’s a new government moving in a positive direction, is when we put on the travel ban? And I don’t get any Myanmar, Kyrgyzstan and these other countries Eritrea, what’s the logic of that?

And so it really concerns me and then it absolutely sends the wrong signal to the rest of the world. And it also harms our ability to attract the talent that we need in our universities and our tech industries in so many places where foreign talent has been so dominant.

After your New York Times opinion piece detailing “the dire consequences of Trump’s Soleimani decision,” there were Americans that included some former Marines that called your criticism “typical Democrat tactics,” among other things. How would you respond to them?

First of all, I’ll let you ask that question, but I think it’s interesting—What Marines? Who said “typical Democrat tactics”?

I read a piece via the Daily Mail and Fox News.

Come on, you guys are the real student newspaper.

He [the former U.S. Marine] was a Benghazi team member. Ralph R. Ortega reported it.

What am I supposed to say? I mean, I respectfully disagree. I don’t know what typical Democrat tactics—we’re supposed to be democratic. Not Democrat. Secondly, I have no idea what that means. I have my own views, and as do many of us who are former officials. I think it wasn’t strategic, I think it was a strategically unwise decision to assassinate Soleimani on Iraqi soil.

I have no love for Soleimani. He was a vicious killer, responsible for the deaths of many Americans, I’m not sorry to see him gone. But the question for me as a national security practitioner was: did the decision to kill him in that way—now we know absent an imminent threat—make Americans more secure?

And my judgment is that in all likelihood, it did not. So, it resulted in us having to pull back from the fight against ISIS, which is the reason we’re in Iraq in the first place. It cost traumatic, potentially life-damaging injuries to over a hundred Americans serving as military personnel. The Iraqi government is now under extreme pressure to curtail our presence in Iraq, which is not in our interest.

And it means that, you know, the work we are doing there to advance our security and our interests may be cut short and we may be kicked out on terms that aren’t our own. And the Iranian government, has accelerated its violations—or, you can’t really call them violations anymore, cause we broke the Iran nuclear deal—but now they are speeding towards reconstituting the capacity to develop a nuclear weapon, which is manifestly not in our interest.

We face an Iranian regime, which if you know anything about Iran, is not done with retaliation. They’re not going to sit back after the United States killed their second most powerful and important leader and say, well, one and done. And what unfortunately Iran is so practiced at is using proxies, covert action and terrorism and cyber means to do real damage.

And I think we have to expect that they will find—at a place in time of their own choosing, ways to continue to respond that may be detrimental to American lives and American interests.

In the past, you have staunchly advocated for Congress’ power to declare war to take precedence over executive war powers—

Where did I do that?

Matthew Petti with the National Interest reported on this.

Okay, so you find the craziest conservative commentators who characterize my views and then play them back to me and expect me to respond to them? Come on, you guys are the top student newspaper, right? Okay, so let’s find where I actually said that, which you won’t, and then we’ll have a conversation about that.

How would you balance advocacy for congressional war powers with support for an interventionist strategy during administrations that you’ve been a part of in the past?

Well, the law of the land is that Congress has war powers. Another part of the law of the land says that the president has certain Article Two authorities as Commander in Chief that he can exercise—without congressional approval—in cases where self-defense is at play or within a 60 day clock of the War Powers Resolution.

But it’s not a question of what one advocates, it’s what the law is. And the Commander in Chief is meant to be bound to adhere to the law, and Congress has certain rules to play. And there are many specific instances that we could talk about. There’s the challenge of the authorization for the use of military force that was implemented after 9/11, and Afghanistan and Lakewood.

And there shouldn’t be and needn’t be, in lawful exercise of power, necessarily a tension between Congress’ war power authorities and that which the executive may exercise. We talked about Soleimani—whether the President in that instance, may have overstepped his Article Two authorities in the absence of an imminent threat.

The reason why they asserted an imminent threat was in line with the President’s Article Two authorities under the Constitution to respond in the case of self-defense. But if there isn’t an imminent threat, and the latest report that the Administration sent to Congress made no mention of an imminent threat, then that was arguably an unlawful use of force.

But in Congress, as you know, reacted by passing in the House now and the Senate non-binding resolutions that express their deep concern about that, and the necessity for the President to come back to Congress if he were to want to launch [indiscernible]?

The interview has been edited for clarity.