Checking in on Vanderbilt’s commitments and targets from the transfer portal so far. 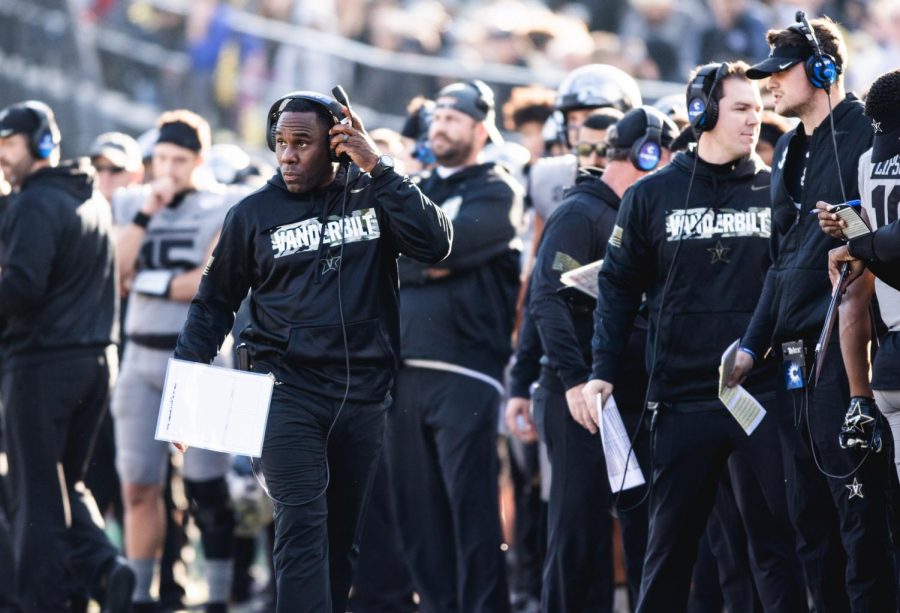 Nearly a month after our first article on Vanderbilt’s outlook on the NCAA transfer market, much has changed. Coach Derek Mason has since added five new members to the Vanderbilt football roster while watching two more depart. Who have the Commodores added on the transfer portal, and who else should they be looking at?

To reiterate on the transfer portal from January’s article: The 2018 college football season saw the introduction of the now widely popular and frequently used “transfer portal” in the NCAA—an updated method of handling transfers that requires schools to release players’ names into a national “portal” where players can be contacted by any school in the country.

Coach Mason and staff watched a few of their quarterback targets fly off the board early in the process. Jamie Newman, the former Wake Forest signal caller, announced he would play his final collegiate season at SEC East foe Georgia. Originally thought to be an Oregon lean, Newman was always unlikely for the Commodores. Then it appeared Vanderbilt was in contact with former Clemson quarterback Chase Brice before he ultimately committed to Duke last week. In the meantime, Coach Mason went out and found his guy in former Kentucky quarterback Danny Clark, who was also once an Ohio State commit. Clark is a 6’4”, 223 lb. southpaw who went to JUCO Cophian-Lincoln C.C. (Mississippi) following two years on the bench at Kentucky. Clark was a highly-touted recruit in high school, ranking as the No. 15 pro style quarterback before choosing the Wildcats over Ohio State and Illinois. He will join fellow JUCO transfer Jeremy Moussa and incoming freshmen Ken Seals and Mike Wright in the quarterback room this fall, which will retain no players from last season. Mo Hasan announced his intention to transfer back in December, while both Deuce Wallace and Allan Walters have followed suit in recent weeks. With four new faces at quarterback in total, Vanderbilt appears to be set with their personnel heading into 2020.

Vanderbilt had some interest in Duke running back Brittain Brown, but he ultimately opted to take his talents to Brentwood to play out his remaining eligibility under Chip Kelly at UCLA. For now, following the departure of bellcow back Ke’Shawn Vaughn, the Commodores will primarily turn to redshirt senior Jamauri Wakefield and sophomore Keyon Brooks to control the running game. In the case that the Commodores want to add experience to their backfield, however,  some options are still available in the portal. Wisconsin transfer Bradrick Shaw rushed for 750 yards in his career with the Badgers while battling injury and backing up superstar Jonathan Taylor. He visited West End in high school and was rumored to have had the Commodores in his top two. He was granted a sixth-year of eligibility by the NCAA, meaning he would surely add a veteran presence to Vanderbilt’s running back group, should the Commodores choose to pursue. Another option is Trevor Speights, a Stanford transfer, who has also yet to choose a destination and held a Vanderbilt offer in high school.

Vanderbilt watched top offensive lineman Devin Cochran pack his bags for Georgia Tech via the transfer portal this offseason but brought in Michigan transfer Stephen Spanellis shortly after. Spanellis gives the Commodores much needed size—he’s 6’5”, 295 lbs. and experience on an offensive line that will return just two starters in 2020. He should slot in at Cochran’s vacant offensive tackle position. Spanellis was a solid recruit in high school with offers from Miami, Michigan State, South Carolina, Tennessee and others before choosing the Wolverines. In his time in Ann Arbor, Spanellis earned B1G All-Academic Honors three times. He announced his commitment via Instagram on Feb. 3, but he is not yet listed on the official roster.

The Commodores have already added two defensive linemen via the transfer portal in Alex Williams (Ohio State) and Rashaan Wilkins (JUCO Monterey Peninsula College). Here’s what Vanderbilt had to say about each in a press release:

Williams, a consensus three-star prospect out of Pickerington North High School in Ohio, comes to West End from Ohio State. In 2019, Williams posted eight tackles for a Buckeye squad that advanced to the College Football Playoff semifinals. As a prep senior, Williams helped Pickerington North to a 10-3 record and Ohio Division II state playoff appearance.

Digging deeper, Williams should be an immediate impact player in 2020 with SEC size at 6’6”, 270 lbs., but his eligibility status appears muddled at the moment. Wilkins provides a bit more beef at 6’4”, 285 lbs. and was rated as a 3-star prospect coming out of JUCO. Stanford transfers Michael Williams and Jovan Swann are both still on the market as well, and Vanderbilt appeared to have interest in both in January. Williams is rumored to be headed to SMU, but Swann, a highly-accomplished academic student who chose Stanford over Northwestern and Vanderbilt in high school, would be a fantastic addition for Coach Mason. The Commodores will return Dayo Odeyingbo and gain sit-out transfer Malik Langham in 2020, so defensive line could actually be a plus position group if Vanderbilt could get meaningful production from Williams, Wilkins or potentially Swann.