Saben Lee and Maxwell Evans combined for 64 points and the Commodores put on an offensive clinic to upset the 18th-ranked Tigers. 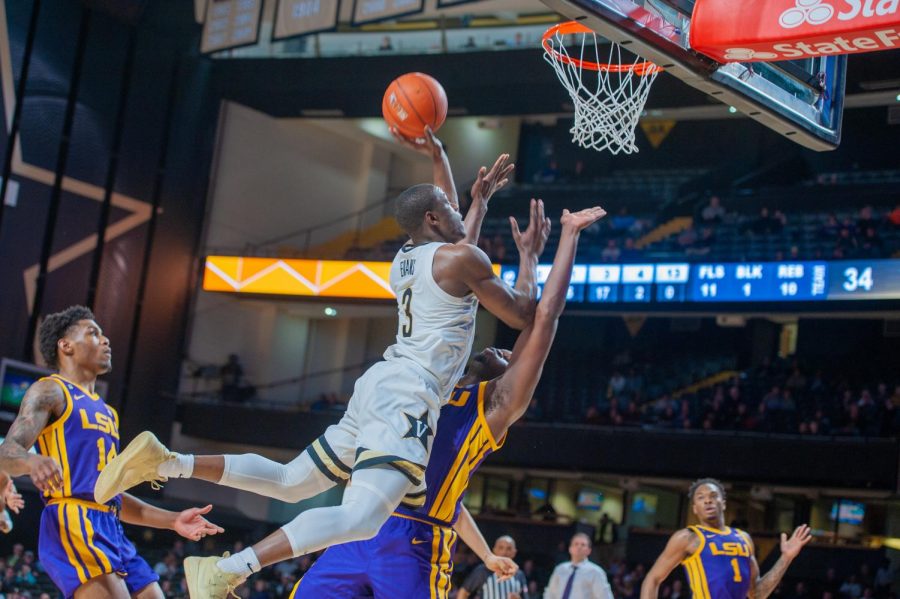 Junior guard Maxwell Evans converts the layup plus the foul in the first half en route to a career high scoring night.

That’s how long the Vanderbilt Commodores have waited for its latest SEC win. They’ll wait no longer.

A game that pinned an 18th-ranked LSU team that entered Wednesday night 8-0 in conference play with a Vanderbilt team that was 0-8 in SEC play should have been a blowout. Instead, Vanderbilt gave the Tigers all they could handle, and in the end, it proved to be just enough.

Vanderbilt’s offense was unstoppable all night, and when Scotty Pippen Jr.’s three dropped with just 68 seconds remaining to give the Commodores a nine-point lead, Memorial Gym erupted.

They knew it was over.

The Commodores defeated the LSU Tigers 99-90 on Wednesday night to earn their first SEC win of the season after a string of 26 conference losses, earning the victory on the backs of its two junior guards. Saben Lee and Maxwell Evans each turned in career-highs, scoring 33 and 31 points, respectively. Their combined 64 points eclipsed Vanderbilt’s total per game average of 56.1 points per game since Aaron Nesmith’s injury.

“These guys have worked their butts off and they deserve what just happened to them,” Head Coach Jerry Stackhouse said after the victory. “A big time win against a great team, and they did it by staying together and competing. We want to eventually have a consistency for us, just a consistent level of effort and I’m so proud of them. They made shots when they had to but more importantly, we defended and we rebounded the ball when we needed to.”

“It just shows that we can play with everyone in the SEC,” Lee added.”

LSU started the game playing full-court man-to-man on defense while attacking the rim relentlessly on offense. Vanderbilt’s offense was patient early, moving the ball around the court and finding Dylan Disu for a corner three to open the scoring.

In a first half that finished with 25 foul calls, LSU’s aggressiveness was rewarded by the officials, who called four fouls on the Commodores in the first 3:56 of the game. The signs that Maxwell Evans would be the star of the half came early, when he hit a three on consecutive plays to go up 18-14 near the 12-minute mark. However, eight foul calls on Vandy in the first 10 minutes of the game resulted in a series of free throws that kept LSU in a very close back-and-forth game.

“When I hit the first couple of threes, I knew that the ball was gonna go in tonight,” Evans said. “Just had to take my time and let it go.”

Saben Lee scored a layup on the very next play, gave Vanderbilt a 39-32 lead and forced LSU Head Coach Will Wade to call a time out with 5:54 left. After the time-out, the game became a slower, more physical battle between the conference foes. Eventually, Evans led another Vanderbilt run, as he hit his fifth three-pointer of the night to take an 11-point lead, and Lee scored on consecutive fast breaks to increase the lead to 13. After Lee nailed two free throws, though, the Tigers came roaring back to close the gap before the end of the half.

A Trendon Watford three-point play got the team within eight points with just over a minute left, before Skylar Mays added five quick points to bring the lead to just five. Despite a first half that saw Evans net a career-high 25 points and Lee add 16 of his own, the Commodores led just 52-47 heading into the locker room.

Evans’ career night continued at the beginning of the second half, as he opened scoring for the Commodores with yet another run of consecutive threes to cross the 30-point mark. Through free throws and interior scoring, LSU slowly chipped away at the lead until it became a 69-67 game. Lee responded to the Tigers’ run with a ferocious dunk that was the highlight of the game, but LSU immediately scored a three to get within one point of the Commodores, until Pippen Jr. hit a mid-range jump shot to again increase the lead to three.

After several scoreless minutes, Jordan Wright went one-for-two at the line, before Watford hit a tough layup to make it a 74-72 game. The Commodores and the Tigers continued trading baskets, as Wright scored six more consecutive points before fouling forward Darius Days, who converted the free throw. Watford’s layup brought the deficit to just one and Mays gave the Tigers their first lead in more than twenty minutes with a three-point play on a fast break.

With five minutes left, Pippen Jr. scored on a drive and Wright got a transition bucket after a steal to take the lead back for the Commodores at 84-83. Lee secured a crucial three-point play for Vanderbilt to increase the lead to five at the three-minute mark before scoring his 31st point of the night to put the Commodores up 91-84.

A clutch step-back three from Pippen Jr. with just over a minute left energized the Memorial crowd before Mathew Moyer split a pair of free throws to give the Commodores a 97-87 lead.

That would be all she wrote. 99-90 was the final score, and the Commodores, for the first time in two years of SEC games, were victorious.

“I feel like if we continue to play and do the things that we do, we can have more nights like this,” Stackhouse said. “This is not the end all for us. It’s not what we want to accomplish and win one game in the SEC. Glad that we did and now that we got that monkey off our back and now y’all can write something else. But now, now we start talking about building the team that we’re trying to build.”

Vanderbilt will look to make it two in a row when it takes on Mississippi State in Starkville on Saturday at 7:30 p.m. CT.