Facing Goliath: Vanderbilt travels to Rupp Arena for a match-up with Kentucky

Vanderbilt hasn’t won an SEC game this season. Or last season for that matter. They head to Rupp Arena to face No. 13 Kentucky on Wednesday. What gives? 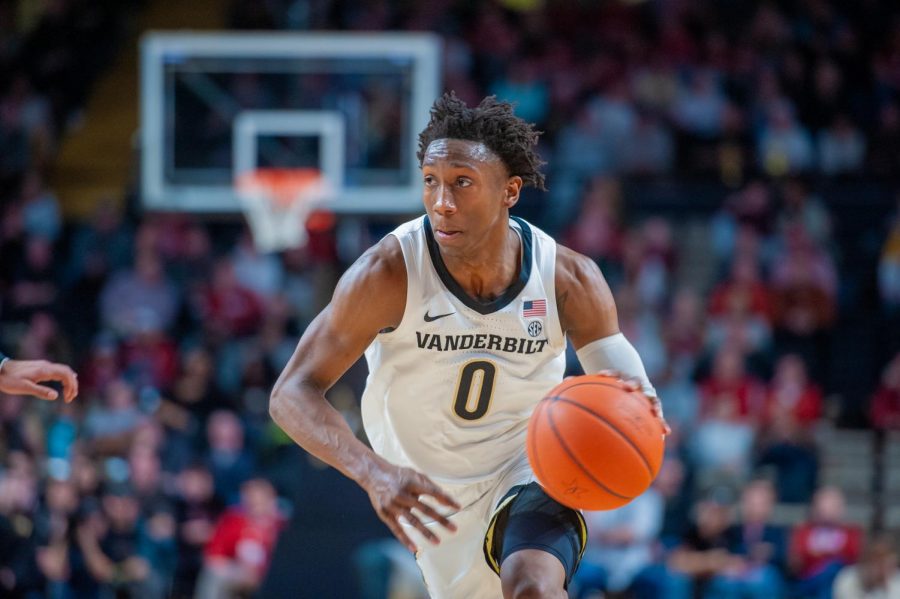 Vanderbilt heads to Lexington, Kentucky for a matchup with the Kentucky Wildcats on Wednesday, Jan. 29, following their sixth straight loss in SEC play this season at the hands of the South Carolina Gamecocks.

On paper, this matchup doesn’t seem very intriguing. Vanderbilt hasn’t won an SEC contest in 24 tries and Kentucky is ranked inside the top-15 and consists of multiple future NBA players. The Wildcats are fresh off a victory over a Texas Tech team that was ranked No. 18 at the time, while the Commodores haven’t finished a game closer than within 15 points since star forward Aaron Nesmith was sidelined with a foot injury. Kentucky leads the all-time series 147-47 and hasn’t lost in this matchup since 2016. Vanderbilt is on the brink of the longest conference losing streak in SEC history.

With all that being said, the Commodores have been surprisingly competitive with the Wildcats as of late. Last season, in the dreadful 0-19 SEC campaign, the Commodores lost just 56-47 at Rupp Arena. And in 2018, they took the Wildcats to overtime in that same building, eventually losing by just two points. In 2017, Vanderbilt suffered two losses by just six points each at the hands of the Wildcats, and in 2016, Matthew Fisher-Davis, Jeff Roberson, Damian Jones, and Wade Baldwin IV all scored in double figures to lead the Commodores to a 12-point victory at Memorial Gym. So though not exactly likely (KenPom gives the Wildcats a 94 percent chance to win), it’s possible Vanderbilt can pull one out at Rupp on Wednesday night. And while Kentucky hasn’t lost at home since, they did drop a game to Evansville in Lexington earlier this season.

Kentucky has a trio of high-profile guards in sophomores Ashton Hagans and Immanuel Quickley and freshman Tyrese Maxey. Hagans was the SEC Defensive Player of the Year in 2018. Quickley is averaging 14 points per game and is the main three-point threat for the Wildcats. Maxey was a 5-star recruit in high school, possesses dazzling athleticism and is averaging 13 points per game himself. Down low, the Wildcats will likely give Vanderbilt trouble with 6’10” power forward EJ Montgomery and 6’11” center Nick Richards, who was just awarded National Player of the Week honors. Richards leads the Wildcats as the lone junior on what is one of Coach John Calipari’s oldest teams in recent memory. He’s averaging 14.3 points and 8.1 rebounds per game thus far.

The Wildcats are one of the most athletic teams in the country. They have tremendous size and elite scoring ability on the roster. They’ve won three in a row and are ranked No. 13 in the country, per the AP Poll.

But they’ve also lost some headscratchers this season. Two weeks ago, they dropped a contest to South Carolina, who was 8-7 at the time. They also lost to Ohio State 71-65 in December. At the time, the Buckeyes were 11-1, and reached a ranking of No. 1 overall. That loss doesn’t look nearly as good now: Ohio State has since dropped six of eight games in the rugged Big Ten and sits at 13-7 on the year. Kentucky also lost to Utah, who started 1-4 in the Pac 12, which KenPom rates as the worst major conference in college basketball below the Big Ten, Big 12, Big East, ACC, and SEC. Of course there was also the aforementioned Evansville loss at Rupp in November, perhaps the most head-scratching of all.

It’s going to take a spirited effort from the Commodores to win on Wednesday night. The keys will be improved shooting, especially from three, getting to the free throw line and limiting Richards and Kentucky from simply taking over the game inside the arc. It will need to be a concerted effort on both ends of the floor for the Commodores to add another dent into the Wildcats’ tournament resume.

In order to so, Vanderbilt is going to have to heat up from the field. Since Nesmith went down, the offensive numbers have been ugly: the Commodores are shooting 31 percent overall and just 15 percent from three, punctuated by the end of the three-point streak against Tennessee. Saben Lee will need to continue his recent stretch of scoring: he’s averaged 16.8 per game over the last four. The Commodores also need to get Lee’s backcourt partner, Maxwell Evans, back on track as he’s scored just six points since tying a career high with 16 at Arkansas on Jan. 15. Vanderbilt had the right idea last time out against South Carolina, getting to the free throw line 35 times, but they shot just 60 percent. That will need to improve if Vanderbilt has any shot of pulling off the upset. If the Commodores are able to continue to get to the charity stripe, it should prove beneficial against a Wildcat team that only goes about seven deep following the departure of former top ten recruit Khalil Whitney. Getting Richards and his supporting cast in foul trouble will not only test Kentucky’s depth but also help Vanderbilt get some easy points (assuming they shoot better than 60 percent from the line), which they haven’t found lately.

Defensively, the Commodores will need to speed up Kentucky, who is ranked 182nd in the country per KenPom’s tempo metric, without letting them turn the contest into a transition game, which will allow the Wildcats’ athleticism to shine. To do this the Commodores should pack the paint and test their luck letting Kentucky chuck from long-range. The benefit of this is twofold: packing the lane will allow the guards not only to prevent drives but also to assist in the rebounding department, where the Commodores will certainly be outmatched. Turning Kentucky into a three-point shooting team is easier said than done, however. The Wildcats hate shooting from deep: only two teams in college basketball have shot fewer threes than them, so they will be looking to wear the Vanderbilt defense down in order to consistently penetrate the paint. Kentucky has not shot higher than 33 percent from long-range in any of their losses this year, so that’s the barometer the Commodores should attempt to keep them under.

Do all of this and maybe, just maybe, Vanderbilt can escape with a victory from Lexington.