Smith: Don’t blame Stackhouse for the end of the streak

Head Coach Jerry Stackhouse is laying a foundation for the future despite the recent tough stretch. 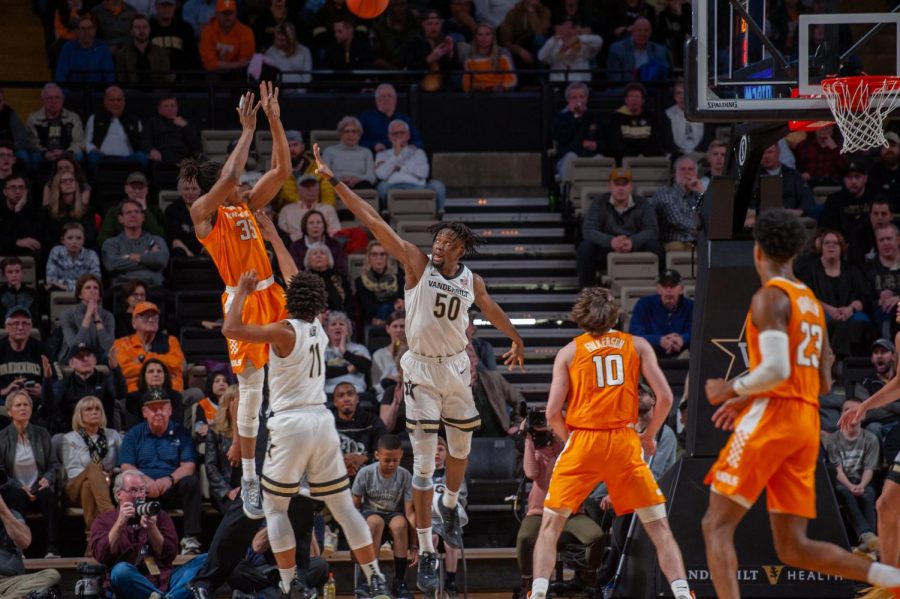 Yves Pons hits a short jumper in the early minutes against Tennessee.

On Saturday night, Vanderbilt fell to in-state rival Tennessee 66-45 at home. It was the team’s third game without star forward Aaron Nesmith, and third loss in a row by 19 or more points. The Commodores also went 0-fer from 3-point land despite hoisting 25 attempts.

Vanderbilt’s 0-25 effort from beyond the arc snapped a streak of 1,080 consecutive games with a made three-pointer. The loss itself pushed Vandy’s winless streak in SEC play to 24 consecutive games.

One streak broke, while another – the team’s 24-game SEC losing skid – continued, and Vanderbilt fans seem to be concerned about the wrong one. Home fans booed 19-year-old freshman forward Dylan Disu for passing up a contested three point shot for an open dunk late in the game, a dunk he easily converted. It was the smart basketball play.

Following the game, some pointed blame at Coach Jerry Stackhouse. But that’s the wrong approach.

In Stackhouse, Vanderbilt has hope. Thus far, he’s done everything right off the court. He began his tenure by convincing Disu and freshman guard Scotty Pippen Jr, who have both started a majority of games for him this season, to stick with their commitments following the dismissal of former coach Bryce Drew. He then went out and found talent wherever he could to try to piece together a makeshift roster, landing guard Jordan Wright, another frequent starter this season, and DJ Harvey, a Notre Dame transfer, among others. He’s made tremendous strides to increase student engagement on campus, whether by handing out free donuts on the first day of classes in the fall or working with Boston Consulting Group (BCG) team of and student consultants to attempt to create a more raucous environment at Memorial Gymnasium.

And while Vanderbilt’s streak of 0-4 in the SEC and 8-9 on the year has made success hard to see on the court, there have been noticeable improvements under Stackhouse, even over the course of this season. Senior center Clevon Brown was having by far his best season as a Commodore before an injury sidelined him for the past seven games. His eFG% (a stat that accounts for three-pointers instead of just a traditional field goal percentage and is more useful in today’s version of basketball) was up 15 percent from last year through nine games with improvement on both two and three-point shots, per Kenpom. His defensive rebounding rate was at a career high. His turnovers were lower than ever. Yes, Brown had played just nine games, but his loss cannot be understated to a team that lacked frontcourt depth already coming into the season. Vanderbilt was 6-3 with Brown in the lineup. They’re 2-6 since.

As for the backcourt, just about every player has seen improvement under Stackhouse’s leadership. Let’s not forget that expectations were not that high for Nesmith coming into the season. Yes, he had a solid freshman campaign and was poised to be the team’s leader in the preseason, but not many expected Nesmith to be one of the best scorers in all of college basketball through January. This was a guy who scored 40 points over the final five games of last season. His lowest five game stretch in 2019? 95 points. Nesmith deserves most of the credit for using the offseason to better his jump shot and for making the actual shots, but Stackhouse is the one who drew up the plays to consistently find his best player open looks, and, as a career 44 percent shooter in the NBA (eFG%), he probably had a hand in helping Nesmith work on that jumper over the summer.

Saben Lee, even while having to bear the brunt of increased attention from opposing defenses over the past three games, boasts his best shooting percentages and assist rates to date this year. Bringing him off the bench was an unorthodox, yet effective, move.

Pippen and Wright have carved out solid roles early in their careers under Stackhouse. Both have steadily improved throughout the season and exceeded most preseason expectations.

So yes, the end of the streak is unfortunate. Sad. A bummer. But with two starters out and five players gone from a team that went winless in SEC play, is Stackhouse really to blame?

Admittedly, I have only followed Vanderbilt basketball for the better part of the last ten months. I cannot fully understand the emotion that the streak carried. I wasn’t one of the fans that watched Vanderbilt make a three every game for the last 34 years. I haven’t experienced Memorial Magic at its peak.

But I want to.

And isn’t that what we all want? The “magic” back?

Ultimately though, Vanderbilt basketball’s future success is measured by one thing and one thing only: wins. Not three-pointers. So, while yes, I can understand why the streak connects fans with Vanderbilt’s storied past, are three pointers really the reason? Aren’t the wins, the SEC championships and tournament appearances what fans want to return to?

The two other schools that held the streak with Vanderbilt, UNLV and Princeton, aren’t most famous for that. And they shouldn’t be. At the end of the day, it’s a stat. An anecdote. Cool, yes. But cooler? UNLV’s national championship in 1990. Princeton’s legendary Sweet Sixteen run in 1999. Actual wins.

That’s where Vanderbilt wants to reach. And Coach Stackhouse represents their best chance to do so. He represents hope and has a vision of what he needs to do in order to achieve his goals. To get Memorial Magic back. To bring the wins back. It’d be a shame if he was prevented from doing so because of blame for a bunch of three-pointers.