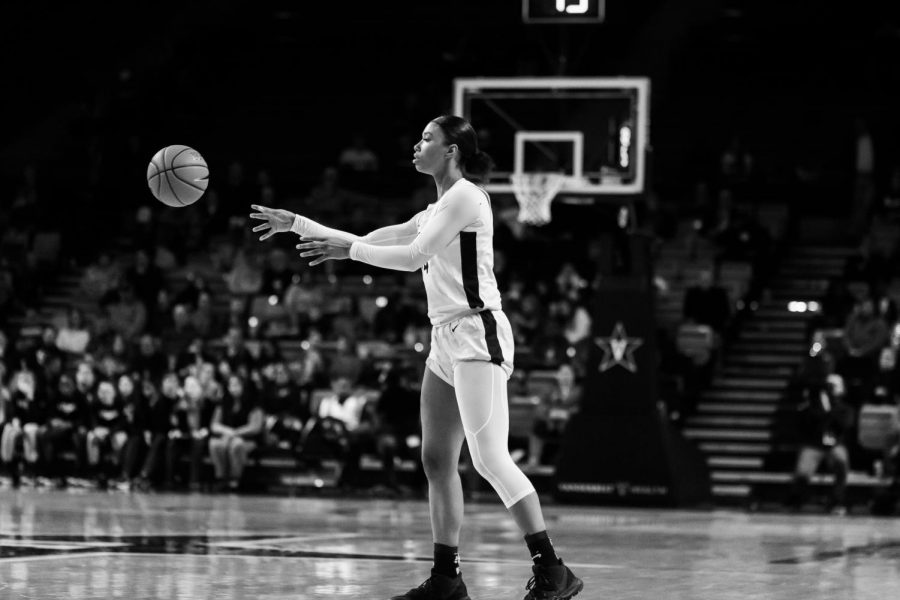 Autumn Newby scored five points to go along with eight rebounds before sustaining an injury late in the fourth quarter.

Coming into this game with a formidable 12-4 record, the Commodores knew they were facing an uphill battle against No. 4 South Carolina.

Still, Vanderbilt looked to test its limits and pull off an upset, or at the very least give South Carolina the dog fight it gave UConn. However, right from the get-go, South Carolina flexed its championship-caliber muscles throughout the game, with Vanderbilt unable to fight back beyond the midway point in the second quarter.

Here are three takeaways from Vanderbilt’s loss to South Carolina:

Vanderbilt’s matchup against South Carolina featured a contest in which the Commodores were outsized in the paint. The disparity in size seemingly demotivated Vanderbilt from attacking the basket offensively. Furthermore, the Commodores played without an outside threat and went just 1-for-6 from three-point range.

The offense often settled mid-range jumpers off ball screens, and as a result, the Commodores barely got to the free-throw line and shooting only 11 free throws with six of them coming in the fourth quarter when the game was out of reach. On the other hand, due to their incessant efforts in the paint, South Carolina had many more trips to the charity stripe and shot a total of 24 free throws.

Basketball is a game of runs, and unfortunately Vanderbilt was not able to stop South Carolina during theirs, including a 21-0 run in the third quarter. While playing reputable programs such as South Carolina, it is easy to play scared and lose momentum quickly. Vanderbilt Head Coach Stephanie White seemed bothered by the Commodores’ lack of fight.

“I’m disappointed for us because I felt like we didn’t have our normal fight,” White said. “I felt like we had a little bit of fear in us. We talk all the time about respecting everyone and fearing no one, and I thought there were times where we played scared, and that’s not who we are.”

So far, Vanderbilt has played surprisingly good basketball this season for a team picked by many to finish last in the SEC. However, if they want to surprise folks in conference play, they must play fearlessly and maintain the same energy level for four quarters.

Koi Love has had a tremendous freshman story and has provided the Commodores a spark off the bench the entire season. She impressed in the team’s showdown against UConn and most recently in her 24-point night against Georgia, so White turned to her early in the first quarter with Vanderbilt down 9-0 to start the game.

Unfortunately, Love did not find her rhythm offensively and ended the game shooting 3-for-17 with only six points, often settling for contested jumpers early in the shot clock or taking the ball to the basket and getting blocked. Coming into the game averaging 13.6 points per game, Love needed to play her best basketball if Vanderbilt was to compete. Instead, this game served as a heavy reminder that sometimes freshmen will play like freshmen, especially against the nation’s elite. That’s okay.

A lot of the talent on this roster is very young and still transitioning into coach White’s offense. Despite her exciting performances in the past this season, Love is still new to SEC play. It will take time and coaching to unlock her full potential and get used to the big games in the spotlight. The potential ceiling of this team’s young talent such as Love is incredibly high, but this game reminded the Commodores that she is still young.

When Vanderbilt forward Autumn Newby went down with 16.3 seconds left in the game, Memorial Gymnasium turned dead silent. She grimaced and lay flat on her back, grabbing her knee before eventually being helped off the court by trainers. Her injury status is unknown at the moment, but this is still a tough blow for the Commodores.

“She’s our leader out on the floor, and any time you see somebody go down, particularly with the injuries that we’ve had, it’s a blow,” White said of Newby.

The 6’2” junior was one of the bright spots in Sunday’s contest, providing veteran leadership throughout the game.  Despite only scoring five points, Newby provided the energy and made plays on both ends of the floor. She fought and grabbed eight rebounds, including four offensive boards that lead to second chance points. She ended the game with a plus/minus of -2, which was better than the rest of the starters by a large margin.

Should she miss significant time, the Commodores would lose their leader during a crucial stretch of their season. Stephanie White knows what that’s like after losing forward Brinae Alexander to a torn Achilles a month ago. Vanderbilt can’t afford losing another frontcourt star.