Officials meet to discuss student concerns and plans for FutureVU. 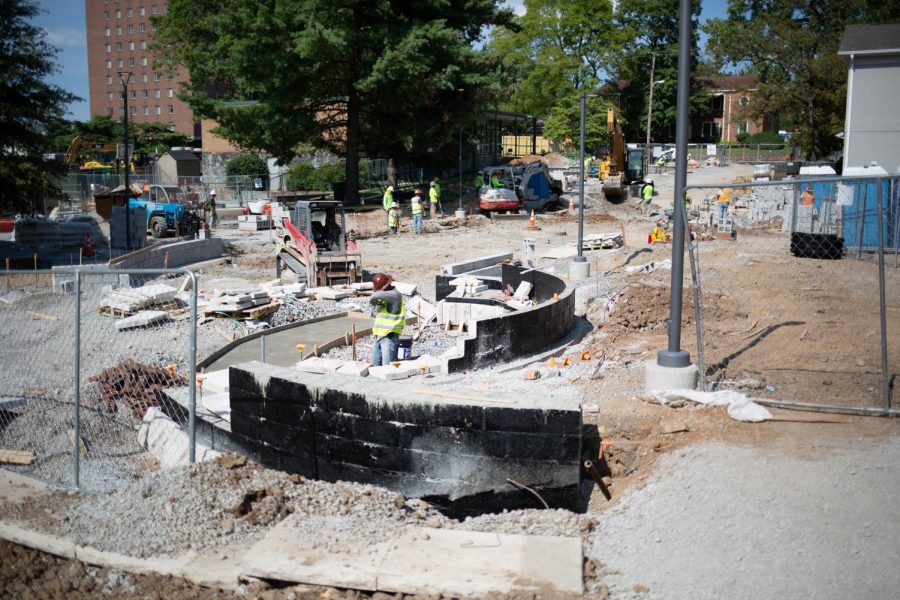 A construction crew works to transition Kensington Pl. to a green space on Aug. 18 as part of the redesign of the West End Neighborhood.

Students, faculty and leadership from the Facilities Department and Layton Construction Co., Vanderbilt’s construction partner, gathered Jan. 9 to discuss progress to the West End Neighborhood project. The meeting, held in the soon-to-be-imploded Carmichael Towers East lounge laid the foundation for a brighter, quieter future for residents currently affected by construction. Topics ranged from construction schedules to ever-changing pathways, with a heavy emphasis on improving the wellbeing of all on-campus residents.

The meeting opened with Project Manager of Campus Planning Bob Grummon joking about students calling him at 3 a.m., but this light remark held some truth. Grummon, along with other project officials, pushed the importance of student communication when something construction-related goes awry. He encouraged students to let them know via an online feedback form when fencing is misplaced, lights are missing or noise can be heard outside of the designated times of 7 a.m. until 6 p.m.

“We’re here because of you. You should not feel bashful. If we’re making noise, let me know. We’ve come a long way, I’m very proud of where we’ve come,” Layton Construction Project Manager Sean Farrell said. “Moving forward, we’ve learned a lot, and I’m being more selective of contractors. I know we’re upsetting your lives and you guys come first.”

Farrell described that workers were rushing to beat the weather and often began work earlier than 7 a.m. and finished just before dark. In order to decrease loud noises near student dorms early in the morning, his team is working to ensure that the strict start time of 7 a.m. is upheld.

All houses built in the West End Neighborhood are either finished or will be finished by the end of this semester, and students can expect a much more open neighborhood layout, Grummon said. Nearby, Nicholas S. Zeppos College continues to grow, with the residential portion of the building to be completed by summer.

This summer also brings an end to more familiar buildings. Students can look forward to the implosion of both remaining Towers and mechanical demolition of the former Zeta Tau Alpha house.

In regards to walkways and fencing, Grummon noted efforts to improve the consistency in maintaining the same fencing throughout the day and noted that they are collaborating with students living closest to construction sites and who are most affected by ever-changing walkways. Changes including an increase in lighting and double-checking path lights before the end of the workday to ease student commutes. The highest priority area for the construction team continues to be the heavily-trafficked Transit Loop located outside of Rand and Sarratt, used by many residents of Branscomb, Greek housing and Towers on their commutes back to their dorms. Farrell notes that he expects a higher quality of life for students when the loop reopens in late Jan. or early Feb.

Feb. will also bring the start of two to three miniature blasts throughout the day on the foundation of Tower 4, currently in the process of demolition, with the blasts lasting until mid-May for a few days out of every week.

“We’ve all had to live through the worst of it but we’re almost there. We’re very excited,” Grummon said.