Zia Cooke and the Gamecocks use a 21-0 run and a 36-point third period to blow out Vanderbilt and move to 16-1 on the season. 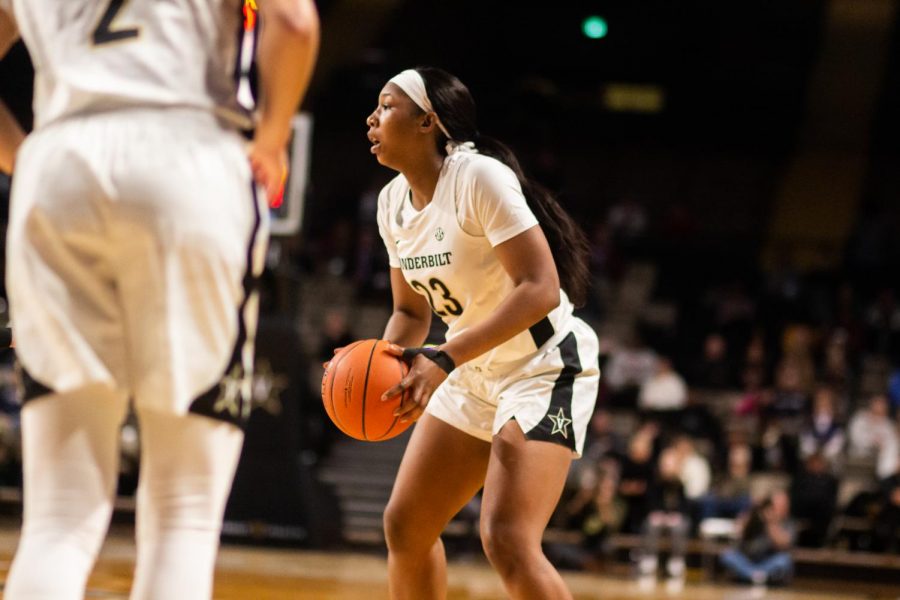 Koi Love spots up for a jumper in Vanderbilt's matchup with South Carolina on January 12.

The Vanderbilt Commodores faced a daunting task with No. 4 South Carolina coming to town for a Sunday showdown in Memorial Gym.

With three minutes left in the first half, the Commodores looked poised to push South Carolina to its limits. Mariella Fasoula’s layup had just cut the lead to three points, and the senior forward gave a fist pump on her way back on defense. However, a late second half run that carried into the third quarter saw a three-point deficit turn into a 30-point deficit within minutes.

South Carolina outscored Vanderbilt 36-14 in the third quarter thanks to solo offensive runs from forward Mikiah Herbert Harrigan and guard Zia Cooke, who finished the game with 15 and 17 points, respectively.

Vanderbilt guard Chelsie Hall led the way for Vanderbilt with 15 points of her own.

“I’m disappointed for us because I felt like we didn’t have our normal fight,” Vanderbilt head coach Stephanie White said. “I felt like we had a little bit of fear in us. We talk all the time about respecting everyone and fearing no one, and I thought there were times where we played scared, and that’s not who we are. South Carolina’s a program we want to emulate. We want to get to where they are, and what you have to do every day to get to where they are is a lesson we have to learn.”

The Commodores struggled out of the gate, watching South Carolina race out to a 9-0 start off two low-post layups by Gamecock forward Aliyah Boston. A three-pointer from Tyasha Harris capped off the run, forcing White to use an early timeout just 1:43 into the ballgame.

Vanderbilt got the offense going out of the timeout. After a couple turnovers, Fasoula converted a short hook shot, and Hall nailed a free-throw line jumper to aid a 6-0 run to bring the game back within three. The spark was short-lived, though. Harris knocked down her second three, and the Gamecocks continued to feed Boston, dominating the glass to finish the quarter on a 12-3 run and gain a 21-9 lead.

After a brief switch to man-to-man defense for the last few minutes of the first quarter, the Commodores went back to zone at the start of the second, utilizing a half-court press. After a couple second-chance layups from South Carolina, including another put-back from Boston, the press started to kick in and create easy chances on the other end of the floor for the Commodores. Autumn Newby converted on a second-chance layup of her own, and Hall drained back-to-back short jumpers to bring the lead back to single digits. A block from Koi Love turned into a coast-to-coast finish, and a layup by Fasoula to cap off a 10-2 run brought the Commodores back within just three points, bringing the crowd to its feet in Memorial Gym.

“Coming off the ball screens when they trapped, I was just trying to get to the paint and see the open man,” Hall said. “My teammates gave me the ball, and I was able to shoot it.”

That’s when South Carolina flipped a switch offensively. Herbert Harrigan sank a corner three to end the run and reignite the Gamecock offense. South Carolina continued to attack the glass from there. Head Coach Dawn Staley’s team took advantage of second-chance opportunities, particularly those that came on offensive rebounds off free throws. Victaria Saxton converted a three-point play, and fellow backcourt mate Cooke converted on three free throws within 15 seconds to give South Carolina 11 consecutive points and a 38-24 halftime lead.

The late first-half run carried over into the third quarter. Cooke took the reins on offense, hitting a three-pointer and an old-fashioned three-point play. Cooke’s contribution, alongside layups from Boston and Brea Beal, gave the Gamecocks ten straight points out of the locker room and 21 straight in total. Hall finally stopped the scoreless run with a driving layup, but the damage had been done.

“They just went on a run,” White said. “They’re so dangerous in transition. Offensive execution has to be your best transition defense, and we had a period where we were taking quick shots, bad shots. We were turning the ball over where they just got out and made us pay every time. We had 16 turnovers which has been kind of a low for us, and they killed us on every one. That’s what great teams do.”

South Carolina continued to pour it on in the third. Herbert Harrigan nailed consecutive jumpers, finding favorable bounces off the iron and in on both to extend the lead. The Gamecocks got five straight points off turnovers from forward Lele Grissett and two more on a layup from Saxton before Vanderbilt guard Demi Washington nailed a baseline jumper to end the quarter. South Carolina had opened a 74-38 heading into the fourth quarter.

The final period saw Vanderbilt fight back, with buckets from Kiara Pearl and Yaubryon Chambers, both playing extended minutes in the blowout.

With 16.3 seconds left, Newby went down with an injury, drawing silence from the crowd. She was later helped off by trainers.

“Hopefully we’ll get some answers tonight or tomorrow,” White said of Newby’s injury. “She seemed in good spirits in the locker room. She’s grown up so much in the last year from a maturity standpoint, from a competitive standpoint. She’s our leader out on the floor, and any time you see somebody go down, particularly with the injuries that we’ve had, it’s a blow.”

Vanderbilt will have a week off before it heads into a home matchup with No. 21 Arkansas on Sunday, January 19.