2019 Year in Review: Building up, standing up and marching forward

As we start 2020, The Hustler looked back at everything that happened in 2019 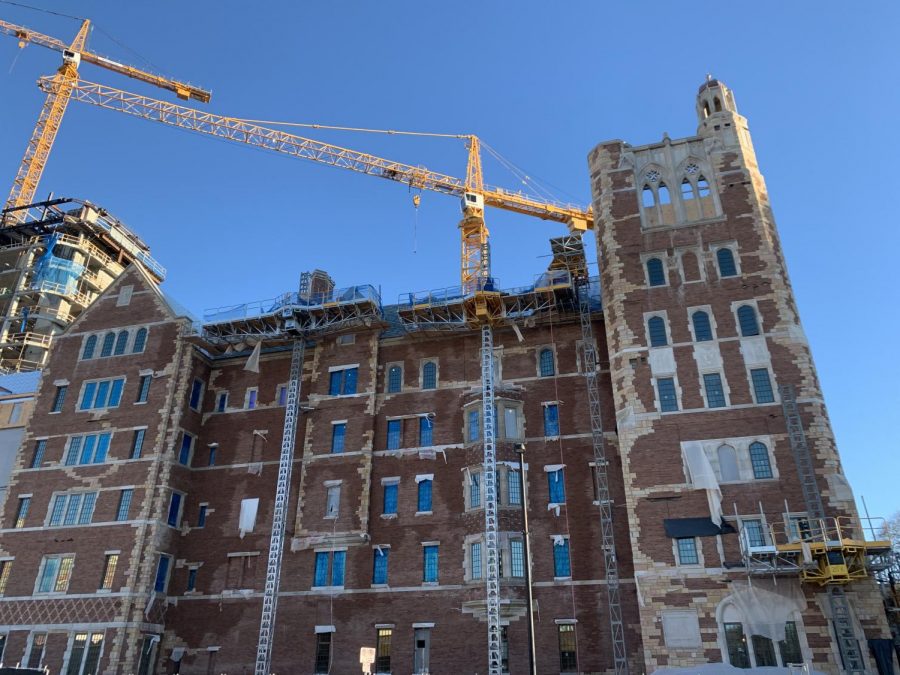 Nicholas S. Zeppos Residential College will be complete for student move-in Aug. 2020, but the West End tower, visible in the far left of this photo, will not be completed until spring 2021.

From student protests to administrative changes, 2019 saw a lot of action. Before facing 2020, The Hustler collected the most newsworthy stories of the last year.

The Hustler uncovered dangerous mold in McTyeire and Blakemore dorm rooms and a breach in the privacy settings of student Google calendars. Hustler coverage prompted a school-wide email from the Dean of Students announcing immediate changes to student privacy settings.

$10,000 of BhangraDores property was accidentally thrown away by Vanderbilt employees. Although the university replaced the value of the goods, the incident raised questions of cultural competency. And after 47 years, the event venue University Club of Nashville closed its doors and now sits vacant behind Branscomb.

The Mental Health Bill of Rights and Responsibilities was endorsed by Vanderbilt administration, VSG and the Graduate Student Council. Since then, national publications including Inside Higher Ed have written about the bill. However, the Vanderbilt Graduate Workers United (GWU) union, which birthed the idea, has yet to receive acknowledgement as a legitimate union in the eyes of the university.

This month also witnessed the peak of the controversy surrounding former Vanderbilt professor and #MeTooSTEM founder Dr. BethAnn McLaughlin. Students staged a sit-in when Laughlin went up for tenure, and marched petitions to the Chancellor’s office when she did not receive tenure. McLaughlin left Vanderbilt in July.

Chancellor Nicholas Zeppos announced that he would be stepping down in August due to health problems. Vanderbilt hired Jerry Stackhouse to lead the men’s basketball program two weeks following the former coach’s firing.

During this transitory period for the university’s athletics and academics, the total number of applications for the class of 2023 increased nine percent from the previous year.

After intensive student organizing gathered thousands of signatures in support of the initiative, the university pioneered sustainability efforts when it vowed to become carbon neutral by 2050. The Faculty Senate Student Life Committee voted unanimously to support a VSG proposal to create what is essentially a universal test bank. Simultaneously, Vanderbilt’s administration continued to oppose unionization of graduate students, citing an “education-first” philosophy.

The student tour guides’ March 20 protest for compensation culminated in May with a rejection of the university’s conditional offer to pay them. Tour Guides chose to keep the independence they enjoy as a student organization rather than accept the offer to get paid under university management. Vanderbilt also announced the construction of a 600-bed graduate student village, which we now know will house a grocery store and coffee shop in its ground level.

VandyBoys made us proud by winning the College World Series, marking the second time Vanderbilt Men’s Baseball has managed this feat in the program’s history. But before becoming national champions, the team’s pitcher Kumar Rocker made national news with an unprecedented 19 strike-out no-hitter against Duke in the Super Regional game.

After 49 years of serving as home to thousands of Vanderbilt students, construction crews imploded Towers 3 on July 27. The event required the temporary shut-down of West End Ave. and contrasted with Towers 4’s mechanical demolition currently in progress to make way for FutureVU plans.

Campus Dining launched the ‘No More Plastic’ campaign, ridding plastic water and soda bottles from the majority of campus and giving all undergraduates free metal Vanderbilt water bottles to decrease the number of plastic bottles purchased at Vanderbilt by about 400,000 per year. Among other dining changes, Campus Dining launched new late-night dining options for students.

New national standards resulted in mandatory attendance caps and guest lists for fraternities in time for the beginning of the football season.

Roommate choice for first-years became a thing of the past in the interest of diverse roommate pairings. Due to an impending housing shortage after Towers 1 and 2 are torn down in Summer 2020, Vanderbilt announced that apartment complex Village at Vanderbilt will become on-campus housing for the 2020-2021 school year. Additionally, Supreme Court Chief Justice John Roberts visited Vanderbilt’s law school.

The Hustler reported that participation in Greek life on campus hit a twenty year low in 2019. In line with other schools nationally, Vanderbilt stopped counting study abroad classes towards Vanderbilt GPA, and became one of the first schools to begin superscoring the ACT.

And following months of the Vanderbilt Prison Project rallying behind Cyrus Wilson, including bringing 100+ protestors to his April parole hearing, Wilson was granted parole Oct. 22 after serving 25 years in prison for a 1992 murder that Wilson and his advocates hold he did not commit.

Former vice president Al Gore joined this year’s list of campus speakers when he delivered his climate crisis keynote Nov. 20. Also in the spirit of environmentality, VSG and Campus Dining inaugurated the ‘Choose to Reuse’ pilot program offering reusable to-go containers to cut down on waste from disposable containers.

After much anticipation, the University revealed its ninth Chancellor: Daniel Diermeier. A current provost of the University of Chicago, political scientist, German immigrant and first-generation college student, Diermeier received praised for his academic experience, grit and international perspective. However, the Board of Trust received criticism for choosing the university’s ninth white male Chancellor.

Diermeier’s union-busting at UChicago and writings on corporate management have also proved controversial, inducing two recent Vanderbilt alumni to start a petition asking Vanderbilt to rescind its offer to Diermeier. The petition currently has over 300 public signatories.