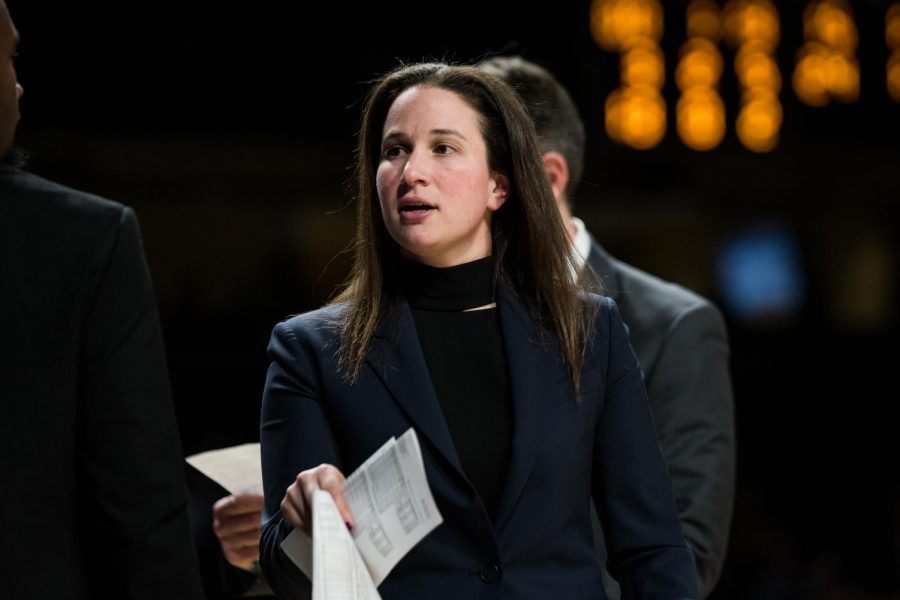 “I’m a firm believer that if you really want to get something done, you should probably ask a woman to do it,” Jerry Stackhouse says.

The first-year Vanderbilt men’s basketball coach reflects that sentiment in his coaching staff. Stackhouse has two women on his staff, including Nicki Gross, the special assistant to the head coach.

Over the course of Gross’ young career, she has seen progress towards women becoming more accepted in coaching men’s basketball both at the professional and college levels.

“In the G-League, back in the day, they didn’t have women’s dressing rooms,” Gross says of the NBA’s developmental league. “I used to have to find a public restroom in the concourse and change into my suit real quick. But they changed that in the past couple of years.”

She never felt like she was treated differently by players, even when she was the only female assistant coach in the G-League, which was called the D-League at the time. She is currently one of just a handful of female Division-I men’s basketball assistants.

“To us, basketball is basketball. We used to say this in the G League: we’re there to help guys get better, and they don’t care if you’re a girl or a guy,” Gross says.

Gross’ career started just seven years ago, when she was a graduate assistant for Monmouth’s men’s basketball team. Her quick rise is even more impressive considering that she didn’t even play basketball in college.

“I played growing up, I just didn’t play in college. I like to think I was pretty good,” Gross says.

She played soccer at Seton Hall, where she was a four-year letter winner. After graduating in 2011, she transferred to Monmouth, where she ran track and field for a year while attending graduate school. When her collegiate athletic career ended, she switched sports again to join head coach King Rice’s men’s basketball staff at Monmouth.

This is where her journey takes a turn, or quite a few turns. By her own count, Gross has lived in seven states in the past five years.

After her stint at Monmouth as a graduate assistant, she worked as an intern for the NBA Summer League, an off-season competition organized by the NBA to showcase young NBA and G-League talent.

“I was just doing normal intern work like selling programs and picking up trash,” Gross says.

But according to Gross, her Summer League experiences were the most valuable of her career.

“There’s a lot of behind-the-scenes work that goes in that people don’t notice,” Gross says. “We pulled some long hours to get that thing going, but it’s really rewarding. It’s really fun to see that league grow over the years.”

She moved to the D-League to work as a video coordinator for Phoenix’s D-League affiliate, the Bakersfield Jam. Spending long nights watching film helped her develop a deep understanding of the game and taught her the importance of paying attention to every little detail.

The next season, she was hired by the Iowa Energy, Memphis’ D-League affiliate, in her first assistant coaching job just three years after she started her career at Monmouth. At the time of her hiring, she was the only female assistant and just the third-ever woman to coach in the D-League.

She continued to work with the Summer League each offseason, building her network and learning how to develop young players.

In the fall of 2016, Jerry Stackhouse was hired as the head coach of the Raptors’ D-League affiliate. He needed to fill his staff with assistant coaches, and everyone around him was recommending a young assistant named Nicki Gross. Warren LeGarie, a prominent agent for coaches, referred Gross to Stackhouse years earlier.

But, he wasn’t the only one in Stackhouse’s inner circle pushing for Gross.

“I got a call from Derek Phelps, who I played with at North Carolina,” Stackhouse says. “She was a grad manager at Monmouth, where he was. I was just getting hit from all sides from people who were close to me about Nicki Gross. I wound up hiring her, and it’s probably one of the best or the best hire that I’ve ever had.”

The two had instant chemistry as coaches. They watched film, scouted players and built Stackhouse’s system together. Their teamwork brought results, too. The Raptors 905 won the D-League Championship in their first season.

From there on out, the dynamic duo traveled from team to team together. Gross joined the NBA’s Memphis Grizzlies as a basketball analyst for the 2018-19 season; Stackhouse was an assistant coach on the team. When Stackhouse was hired at Vanderbilt in April 2019, there was no question that he was bringing along his right-hand woman Nicki Gross.

“She does everything that we need done from a technical standpoint,” Stackhouse says of Gross. “She understands our system. She understands exactly how I like things to work, so as far as onboarding, she’s been invaluable.”

In her role at Vanderbilt, she’s a Swiss army knife of sorts. Gross helps onboard new assistant coaches and teaches them Stackhouse’s offensive and defensive systems. She runs the SportsCode analytics system – software that provides game footage and statistical analysis – a program Stackhouse admits that he doesn’t have the computer savvy to work himself.

Her work ethic and unique blend of skills learned on her quick ascent have helped her shatter glass ceilings in the G-League, NBA, and now Division-I men’s basketball.

The only question for Gross is what’s next?