In a telenews conference Dec. 4, Diermeier and Chairman of the Board of Trust Bruce Evans discussed the selection process, plans for the university’s future 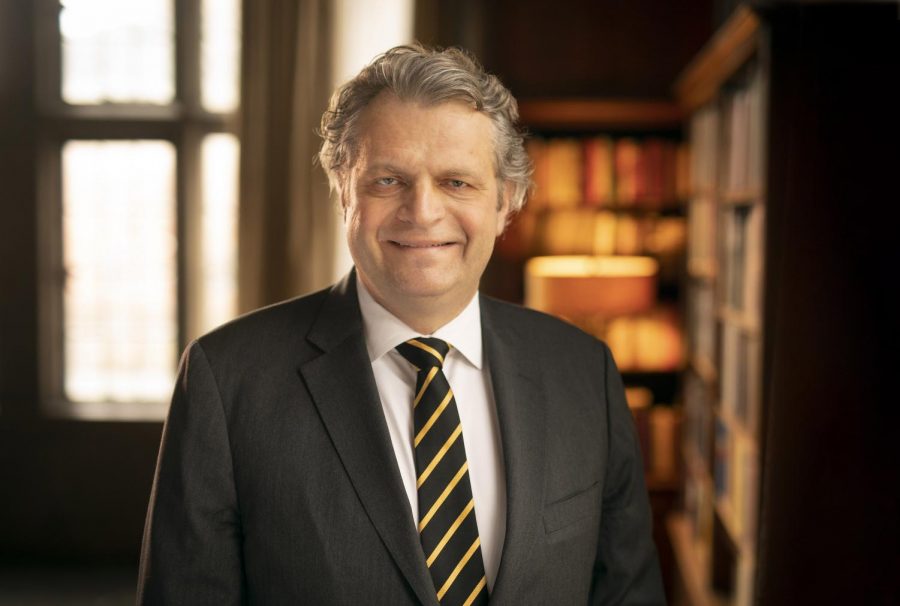 Vanderbilt named Daniel Diermeier the ninth Chancellor of the university Dec. 4. Diermeier is the current Provost at the University of Chicago, and will begin his new role at Vanderbilt in July 2020.

Following the 9:00 a.m. announcement, Diermeier and the Chairman of the Board of Trust Bruce Evans, who headed the Chancellor Search Committee, answered questions in an 11:00 a.m. tele-press conference.

Evans revealed that over 100 candidates applied for the role, and the Search Committee met with “a couple handfuls” of candidates to discuss the opportunity before ultimately choosing Diermeier. In addition to information about the search process, topics discussed during the conference included Nashville as a destination, diversity and Diermeier’s experiences with graduate unionization efforts at the University of Chicago.

When students, faculty, staff and alumni were surveyed about what they were looking for in the next Chancellor, the number one answer was diversity, according to the Chancellor Search Advisory committee report detailing community feedback. Diversity was mentioned in 1,156 survey responses, closely trumping concerns over academics, which were mentioned more than 1,000 times.

Diermeier, like the previous eight Vanderbilt chancellors, identifies as a white man. In response to a question from The Hustler regarding student concerns about the role of diversity in the process, Evans described how both the Chancellor advisory and search committees represented “a diversity of opinions.” He said the committee worked with their search consultants to identify a diverse set of candidates for the position.

”We are quite happy with the way both of those committees function,” he said. “They just include a diverse set of viewpoints, a diverse set of life experiences and I think are reflective of the university and its values.”

Evans also discussed Diermeier’s track record as someone committed to diversity; he noted Diermeier’s efforts in appointing female administrators and increasing the diversity of the study body at the University of Chicago “with targeted programs for first-generation, African American and Hispanic students,” among other initiatives.

“In having spent time with Daniel and having come to understand his record of leadership and academic achievement is that he wants to foster a welcoming, diverse and inclusive community that’s central to Vanderbilt’s mission,” Evans said.

During the Dec. 4 call, Diermeier was asked about his past positions around graduate student unionization efforts.

“Our sense has been that graduate student education is central, it’s important,” Diermeier said. “But, the standard collective bargaining process as unionization provides it and requires it is not the best way to improve graduate students’ education at universities.”

Following a 2016 ruling from the National Labor Relations Board which gave graduate students the right to unionize at private universities, Vanderbilt administration declined to formally recognize GWU. Like Diermeier, Provost Susan Wente and Dean Mark Wallace opposed unionization and argued that unionization could put the university and the students on “opposing teams.”

Diermeier also discussed his intention to explore ways to bolster Vanderbilt’s international reputation, which students noted as a concern during a search advisory townhall earlier this semester. In response to a question from The Hustler, Diermeier stated that Vanderbilt has significantly increased its national reputation in recent years, but said that  increasing the university’s international prestige is a priority of his, though he is not yet sure of the best way forward.

“I don’t have any preconceived notions about exactly what does that look like because it needs to be a good fit for the university and its culture and its officials,” Diermeier said. “But it is certainly something that we will tackle, and we want to be intentional about and we want to walk away with a plan that makes it clear exactly what we want to accomplish.”

Diermeier will be stepping down as Provost of the University of Chicago early next year, and hopes to regularly visit Vanderbilt to meet with students, faculty and academic leaders on campus to learn as much as he can about the university and Nashville before his tenure begins.

“It’s a wonderful and friendly and vibrant community. I like to learn more about it and, you know, spend more time here. So I’m excited about that part of the next chapter of my life,  getting to know the community, getting to know the city and what it brings to the table, what it’s all about,” Diermeier said. “Clearly, a lot of people agree with me because it’s growing rapidly, as you can see the growth everywhere. It’s certainly one of the most attractive places to live in the United States now, and it has a spirit that is both friendly and accessible, but also, I think has a sense where great things can be accomplished.”