LSU's win over Alabama gives some clarity at the top of the ladder, while teams around .500 wrestle for bowl eligibility 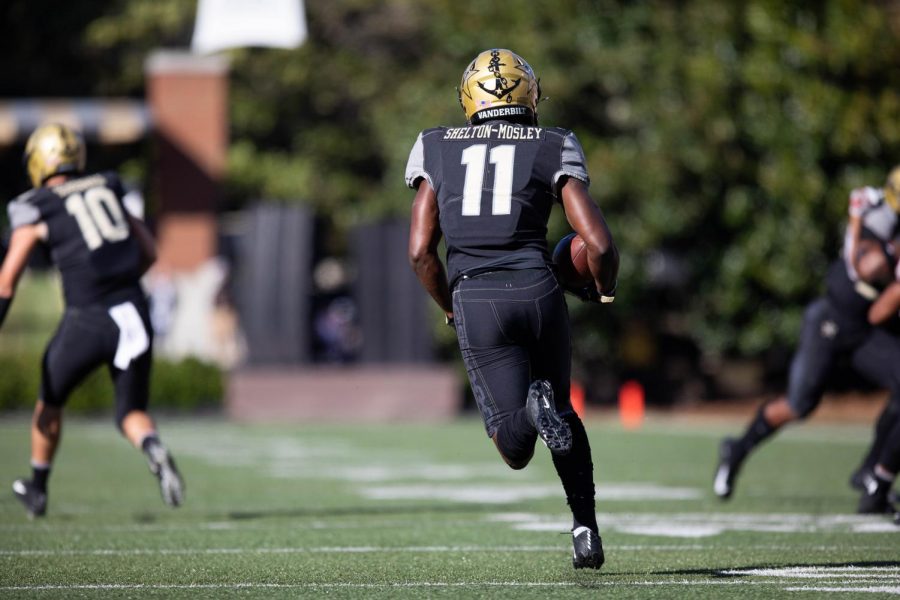 Justice Shelton-Mosley takes off after fielding a punt against UNLV.

The LSU Tigers got a monumental win over Nick Saban and the Alabama Crimson Tide Saturday in Tuscaloosa. Heisman-leader Joe Burrow threw for 393 yards and two touchdowns as LSU snapped an eight-game losing streak against Alabama. LSU came scorching out of the gates and jumped out to a 33-13 lead at the half. The Tigers were able to fend off a late Alabama comeback for the 46-41 win and the top spot in this week’s power rankings.

Alabama lost a tough rivalry game to LSU this weekend at home, dropping 46-41 to the Tigers at home. Tua Tagovailoa threw for 418 yards and four touchdowns but also had two early turnovers that ultimately cost the Tide the win. Alabama’s defense was gashed all day long, and Saban’s group now finds themselves on the outside looking in for the College Football Playoff race.

The Georgia Bulldogs had a solid showing Saturday, beating down a downtrodden Missouri team 27-0 at home. The Bulldogs have rebounded from the stunner of a loss to South Carolina a few weeks ago and now sit at 8-1 (5-1 in conference) with a chance to clinch the SEC East next week with a win over #12 Auburn. Jake Fromm threw for two touchdowns in the win and the Georgia defense flexed its muscles, allowing just 198 yards to Missouri in the game.

Florida dominated Vanderbilt on Saturday en route to a 56-0 smackdown in Gainesville. Backup quarterback Kyle Trask was 25 for 37 for 363 yards and three touchdowns through the air. The Gators get Missouri this Saturday, a team that has given them trouble in the past: the Tigers have won two straight and four out of six meetings since joining the SEC in 2014.

Auburn was on bye in Week 11, but big things await for Gus Malzahn’s Tiger squad in the form of the Georgia Bulldogs. For freshman quarterback Bo Nix, it will be as good of a defense as he has ever seen, and if Auburn wants to move up in the national conversation, they’re going to need a good performance from him. Nix will likely look to get the offense going downfield with Seth Williams who has caught eight touchdowns out wide for the Tigers this season.

Texas A&M was also off in Week 11, and sit at #6 in this week’s power rankings. They’re favored by 10.5 in what should be a relatively easy contest against South Carolina in College Station for senior day. Sitting at 6-3, the Aggies need this win to stay above .500 before their brutal final two weeks as they hit the road to play Georgia and LSU.

Tennesse has slowly risen in our power rankings and now finds itself in the top half with three weeks to go in the college football season. The Volunteers came back from a 13-3 halftime deficit against the Kentucky Wildcats this week en route to its 5th win on the season. They’re now up to 5-5 overall and 3-3 in SEC play, both impressive numbers after their disastrous 0-2 start. The Volunteers are on bye this week before late season contests against Missouri and in-state rival Vanderbilt decide their bowl fate.

The Kentucky Wildcats fell to 2-5 in conference play on Saturday when they lost to the Tennessee Volunteers. Kentucky led Tennessee 13-3 at the half but couldn’t stop a 14-point comeback from Tennessee signal-caller Jarrett Guarantano. Wide receiver turned quarterback Lynn Bowden Jr. got the start again for the Wildcats, but threw for only 25 yards on seven passing attempts. Despite being sixth in the SEC East, their tough schedule keeps them at the number eight spot. They’ll need to win out if they hope to make a bowl, and that process will begin on Saturday, as they try to bounce back against Vanderbilt on Saturday

Coming off of a three-game losing streak, the Missouri Tigers are certainly in a worse spot than they were three weeks ago as a ranked team. Missouri was shut out by Georgia on Saturday, as the Bulldogs’ dominant defense held the Tigers to less than 200 offensive yards. Missouri was also clearly suffering from the absence of quarterback Kelly Bryant due to a hamstring injury. The Tigers are in the midst of a tough stretch, and they’ll continue it on Saturday as they face the Florida Gators in Gainesville.

The Ole Miss Rebels routed a winless New Mexico State Aggies team 41-3 on Saturday in Oxford. The Rebels’ skill position players looked impressive, as freshmen running backs Snoop Conner and Jerrion Ealy combined for three touchdowns and 180 rushing yards. Quarterback John Rhys Plumlee also contributed 177 rushing yards and two additional rushing touchdowns. Despite the win, the Rebels are still fifth in the SEC West, and their schedule gets even tougher as they face the top-ranked team in the country, the LSU Tigers, who are coming off of an impressive win against Alabama.

After a 30-point win over Arkansas, the Mississippi State Bulldogs were idle in week 11, for which they were likely grateful, since the Bulldogs will have to face Nick Saban’s Crimson Tide team coming off a loss to LSU. They sit under .500 at 4-5, so it will likely take consecutive victories over Abilene Christian and Ole Miss if they hope to guarantee a spot in a bowl. The Bulldogs’ win against Arkansas snapped a four-game losing streak, and the head coach Joe Moorhead will hope to avoid another similar streak on Saturday.

After this weekend, South Carolina’s chance to secure a bowl spot certainly looks much slimmer. The Gamecocks lost to an 8-1 Appalachian State squad on Saturday 20-15. Their offense was largely led by quarterback Ryan Hilinski, who threw for 325 yards on 57 passing attempts. With the loss, South Carolina falls to 4-6, meaning that they would have to obtain back-to-back wins against Texas A&M and the third-ranked Clemson Tigers to even have a chance at a bowl, which at this point seems highly unlikely.

In what was a close first half, the Commodores found themselves run out of the stadium by the Florida Gators in a 56-0 drubbing. Deuce Wallace struggled again at the helm, completing just 8 of 17 passes for 60 yards and a pick, earning a quarterback rating of 1.0 or lower for the second week in a row. With the loss, the Commodores will definitively not be playing in a bowl game this season, but they’ll look to salvage some success when Kentucky comes to town on Saturday.

Arkansas lost to the Western Kentucky Hilltoppers 45-19 on Saturday, extending their dreadful losing streak to eight games. Western Kentucky quarterback Ty Storey, a transfer from Arkansas, passed for 213 yards and a touchdown against his former team. The Arkansas administration displayed their lack of faith in their leadership, as they fired head coach Chad Morris, who had a record of 4-18 in his first two years. The Razorbacks head into a bye this week, but they’ll face the top-ranked LSU Tigers in their next game.