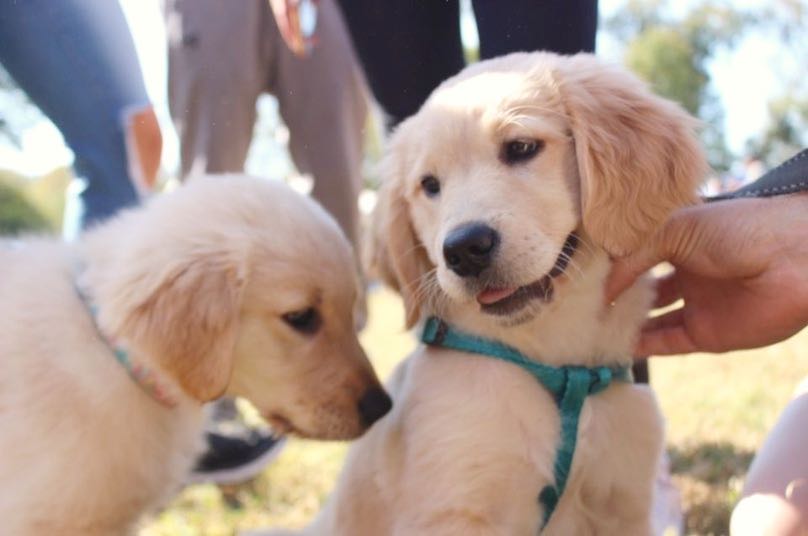 Cute aggression and why people want to squeeze adorable dogs

I never considered myself an impulsive person. Still, at Nashville’s Great Golden Gathering, when I saw a Golden Retriever dressed as a pumpkin, my first thought was to pinch it’s chubby cheeks as hard as I could. The way its tail wagged, the way its fluffy ears moved and the way it played dead on the ground for a belly rub just screamed at me to squeeze the dog.

Please rest assured that I had no intention to harm the dog. Neither does the woman who says she wants to pinch the adorable baby, or the child who has the sudden urge to squeeze his new kitten tightly. Often, we feel this weird urge to perform aggressive behavior when presented with something we consider cute, contradicted to what’s expected, such as hugging or cooing. The psychological phenomenon is called cute aggression, and approximately 50 percent of people experience it.

Interestingly, when I was telling my friend about this, she said that there’s a specific word, “gigil,” in Tagalog (in Filipino) and “gemas” (in Bahasa Indonesian) that describes this phenomenon. While English doesn’t have a term for this feeling until recently, apparently several other languages have had words for cute aggression.

Oriana Aragón and Rebecca Dyer, the researchers who coined the term “cute aggression” were the first to investigate the science behind it. In their experiment, they found that when shown pictures of adorable dogs, people were more likely to have an impulse of wanting to squeeze it. They also felt the urge to verbally express feeling overwhelmed at the cuteness of the dog. The researchers also gave people bubble wrap to pop, and the group presented with cute pictures popped a lot more bubbles than the group shown with neutral images.

The scientists discovered that there are two main reasons behind this paradoxical behavior.

The first hypothesis is that cute photos stimulate our urge to take care of those in the pictures. Research has pointed out that people who viewed baby photos have more cautious and attentive actions afterward. Based on this finding, it is said that cute aggression is a mechanism that ultimately helps babies survive as it reminds us of our capability to harm the baby, therefore making people careful when taking care of it.

Before I jump into the second hypothesis, let’s introduce some of cute aggression’s close cousins in our college lives that might help explain this phenomenon. Cute aggression is not the only social situation when people show expressions that are contradictory to what was expected. You might find yourself crying at your graduation ceremony even when you’re happy. At a concert, you might scream as if you saw a spider when the singer comes on stage. When the Commodores (finally) score in a football game, you might clench your fist so hard people think you’re mad instead of pumped.

In these scenarios, we often experience intense positive emotions, and our bodies express opposing behaviors to ensure we aren’t overwhelmed. This explanation was later confirmed when Katherine Starvroulos investigated the brain’s activity behind cute aggression. Her team found that there is a positive correlation between activity in one’s emotional system for feeling overwhelmed when one is experiencing cute aggression.

Clearly, moderation is key, even with experiencing cuteness. It is well-known that watching cute animal and baby videos decrease one’s stress levels, making it a popular comfort option for students. As we stream YouTube videos for relaxation, cute aggression serves as a mediator, regulating our emotions and ensuring that positive emotions don’t “overload” to the point where it causes discomfort. This, and the increased feeling of care for babies and animals that comes along, raise offsprings’ chances of survival and might be the reason why this trait was kept as we evolved as humans.

Next time when your aunt pinches your cheeks at the family gathering, you’ll know that she’s doing it out of care. In the end, evolution kept cute aggression as a trait to promote care among us all.

The Vanderbilt Hustler welcomes and encourages readers to engage with content and express opinions through the comment sections on our website and social media platforms. The Hustler reserves the right to remove comments that contain vulgarity, hate speech, personal attacks or that appear to be spam, commercial promotion or impersonation. The comment sections are moderated by our Editor-in-Chief, Rachael Perrotta, and our Social Media Director, Chloe Postlewaite. You can reach them at [email protected] and [email protected]
All The Vanderbilt Hustler picks Reader picks Sort: Newest
Subscribe
Login
1 Comment
Newest
Oldest Most Voted
Inline Feedbacks
View all comments
C
Connie

I sometimes wonder why I want to hug my golden so tight that other people might think I could hurt him. Now I know there’s whole psychological phenomenon behinds it to help us protect them as our Cubs kits and pups =p