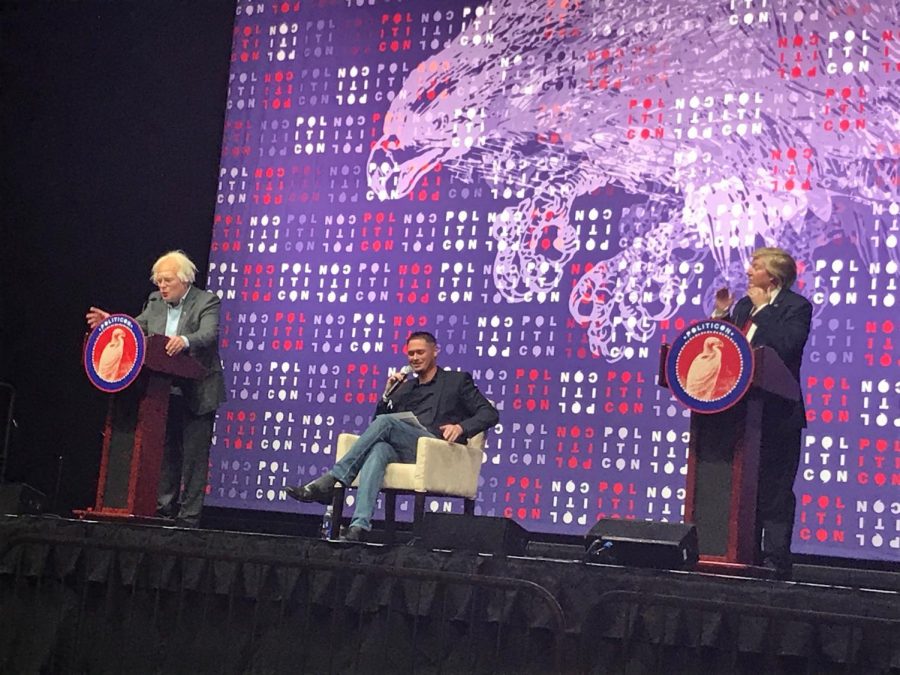 Will Fritzler and Miquéla Thornton

Two members of The Hustler’s team attended the convention and shared their main takeaways from the packed two days of political excitement.

Walking into Music City Center for Politicon, we were greeted by supporters of every political stance out there. Teenagers in “Feel the Bern” shirts– along with one representing almost every other thousand democratic candidates – strolled past tables of radio hosts selling “liberal tears” swag, while those donning MAGA hats cluttered around them. There was even a baby Trump balloon floating above a MAGA drag queen who took pictures with the left, right and everyone in between.

Watching the convention from the eyes of a college student, one of the most interesting concepts I took from the panels was the demographic changes in the Democratic Party touched on by TSU Prof. Elwood Watson. According to Watson, that democratic candidates must pay attention to the fact that “It’s moving left. It’s getting younger, blacker, browner and, frankly, gayer.” The idea of a growing political youth was expanded upon by panelists in the “Can Trump be Beaten?” discussion. Allan Piper, the Politics Producer of NowThis, identified voters who are coming of age in this election as an untapped niche for the democratic candidates – as the only Gen-Z’er in the front row, I swear he looked at me. Other panelists, including Zerlina Maxwell of NBC/MSNBC and Dr. Jason Johnson of MSNBC spoke about the importance of engaging young voters, who are less likely to identify with a party, in the voting process by tackling suppression head on.

Although I agree with all of these sentiments, these were merely comments made at panels dedicated to other topics. And though they made for intuitive discussions, I think that Politicon lacked in panels that were made specifically for young voters.

Yes, they featured new, Millennial voices like Kyle Kulinski and Lauren Chen, as well as a college debate between Vanderbilt and TSU, but a conversation about, as Allan Piper put it, “voters coming of age in this election,” a.k.a. Gen Z, was where the convention fell short in my eyes.

However, looking at the convention through the eyes of a Black Democrat, I felt not just acknowledged, but surprisingly represented through conversations, panels and speaker diversity. Of my many takeaways from both the “Is America Racist?” panel and the Live Taping of the Touré Show, “Black in the Age of Trump,” I was employed to question who I intended to vote for in the 2020 election. In the “Is America Racist?” panel, the speakers didn’t just ramble about modern American racism 101, but instead discussed the racial implications of the upcoming election and ways the democratic candidates can maximize their nonwhite supporters.

The panel shed light on candidates who haven’t really “cut their teeth on racial justice,” as accredited author Tim Wise put it. I noticed parallels in the Democratic debates, specifically when Zerlina Maxwell pointed out the hesitancy of candidates to push policy ideas that directly affect their base of Black and brown women. As someone in that base, my list of “votable” candidates narrowed. Later that night, at the mock Trump vs. Bernie debate, Trump’s impersonator ironically joked that Democratic candidates have been throwing the word “reparations” around like a stick to the Black vote (and that that would help him win). And for the first time in my short voter life, I found myself agreeing with “President Trump.”

Still, despite the representation and the conversations focusing specifically on Black Americans, not everyone was as happy to hear about it as I was.

At the Touré Show panel, Trump supporters were standing around a packed audience of all races and began demanding to speak when Touré and Elie Mystal compared MAGA hats to KKK hoods. They repeatedly attacked White House Correspondent April Ryan, chanting “leave the Democratic Party” and, in my opinion, ultimately ruining the event’s only panel that specifically addressed Black Americans. Even though Politicon advertises itself as an “Unconventional Political Convention” where anything can happen and no stance is off limits, I felt that security should have kicked the Trump supporters out, for they would have never done this had there been white panelists on the stage.

My Politicon experience, though damaged, wasn’t completely ruined by this. On Sunday, I attended a panel titled “The Future Is Female: The Future is Now,” which was the convention’s only all-female panel. A huge takeaway came from journalist Lauren Duca, who said, “we will not be far enough until we don’t need a special panel to talk about where we are as women at Politicon.” However, as they did talk about where we are as women, Femsplainers podcast host Danielle Crittenden’s idea – that the modern goals of feminism should not be to work, operate and run rooms just like men – found its way in many conversations. Expanding on Crittenden’s idea, Duca gave the metaphor of how women wearing pantsuits in the workspace is “doing it like a man,” and that we must normalize “doing it like a woman,” essentially, running a room in a skirt. As a Democratic voter and a woman listening, I wondered: Five women are running for the Democratic candidacy and one, according to polls, is a very likely nominee. What would the presidency look like when finally “done in a skirt?”

My time at Politicon was one of curiosity. For example, Music City Center, Nashville’s largest convention center that hosted Politicon, completely lacked advertisement on the outside of the building or in surrounding areas. I almost wondered when I arrived on Saturday whether I was in the right place. Perhaps this low public exposure explains why an estimated 6,000 people attended the convention when 10,000 were expected. For the “Coachella of politics,” there was an unusual lack of attention.

I also wasn’t sure why the audience didn’t have more opportunities to interact with the speakers. Meet-and-greet sessions were frequently crowded, and Q&As at the end of panels often involved a rush to the front of the viewing halls to the microphone and only a few audience members could participate. Politicon could have, for example, hosted an interactive social media channel to submit audience questions in live time for panels. Social media is the preferred form of political engagement for many Americans, so Politicon’s lack of social media presence was unexpected.

As expected from a large political gathering, there was no shortage of contentious moments. On impeachment, for example, Democratic strategist James Carville, in his debate with Hannity, responded to the jeers of the pro-Hannity crowd by saying that “We can scream, we can yell, but it’s gonna happen,” while Hannity said that the Horowitz and Durham reports from the Russia investigation would “shock the conscience and soul of the nation” once released. A viewer of Al Franken’s evening talk stood up and shouted that he was a “liar, fraud and sexual predator” before leaving. And conservative commentator Tomi Lahren was singled out by Tim Black, another commentator and fellow panelist, for her tendency to distract from substantive debate on issues like NFL players kneeling for the national anthem.

My biggest takeaway from Politicon is that, as Dr. Jonathan Metzl also said in our interview at the convention, we need more gatherings like it. If political commentators of different political stripes have more opportunities to engage each other on important issues, they could not only mature their views but set an example for their followers to do the same.