The university offered the house to anyone who would be willing to move and preserve it, but found no one willing and went ahead with demolishing the house 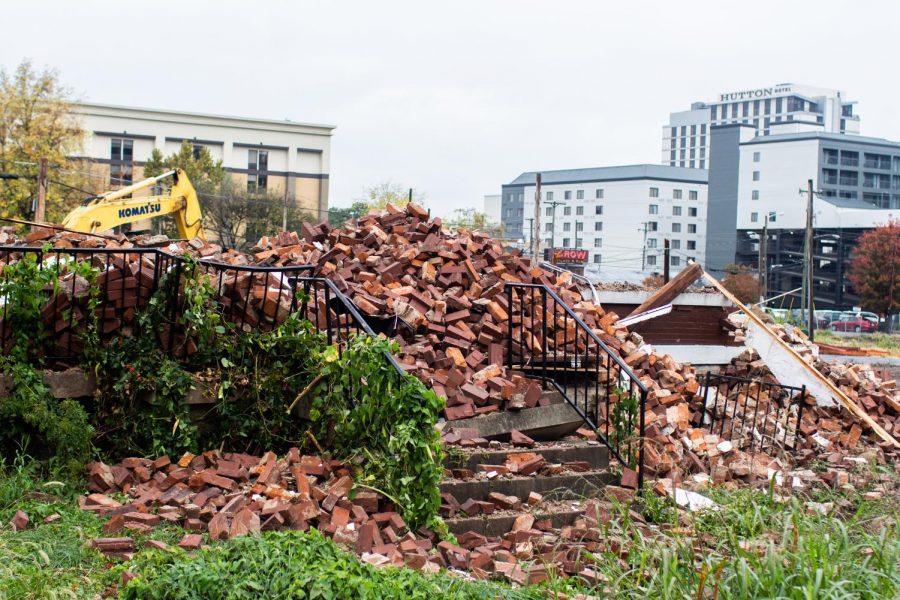 The remains of the Manuel Cuevas house in Midtown, which was torn down in order to build graduate student housing.

A Vanderbilt-employed construction crew has begun demolition in Midtown at the intersection of 20th Avenue and Lyle Street to make way for new graduate student housing. The building is expected to contain approximately 600 beds.

One site being demolished at the intersection is the Manuel House. Once home to the store and studio of famous fashion designer Manuel Cuevas, the Manuel House sat right on the corner of 20th and Broadway. Cuevas is most famous for dressing such celebrities as Elvis Presley and Johnny Cash. Possibly Cuevas’ most well-known style is his Western-style, visible on celebrities such as Nashville’s own Dolly Parton. The house was built in 1910 and purchased by Cuevas in 1988.

The house was home to a variety of businesses throughout the years, from a carpet business to a brothel, according to Cuevas. For Cuevas, the house served as his fashion company’s store. While he understands the university’s intentions, Cuevas believes that the demolition of the property is a shame.

When the university first acquired the house, they were offering it to anyone who could move the property without damaging it and then preserve it. Finding no interested clients, Vanderbilt moved ahead with demolition plans.

Cuevas says that he tried to move the house to another location where it could be preserved and made into a museum, but no to avail. He tried to work with Vanderbilt to make this happen, but received little help, he said.

Cuevas hopes to see more efforts made by Nashville developers in the future to preserve important staples of the past, like his store.

He also said that he was never contacted by the university about his plan for the property.

In an email to The Hustler, communications coordinator for the Facilities Department Shelby Pendowsky said that the building could be demolished because it was not listed on the National Register of Historic places and was also protected by local zoning regulations.

Prior to its demolition, Vanderbilt worked to preserve the home’s historic elements. Along with the help of local organization the Preservation Station, the university salvaged various architectural features from the home this past August. Pendowsky said that the items would be preserved for future use.

The Preservation Station is a local company that salvages antique building materials for resale. Work onsite was provided by both the Preservation Station as well as Project Return, a local nonprofit that offers work opportunities to people recently released from prison. The project was announced earlier this year, as an ongoing effort by the university to foster a residential learning community.

Pendowsky said that the construction of the housing complex would improve quality of life for graduate students through the creation of a space where relationships and connections between the students can be formed.

Once completed, the building will feature apartments of various types, as well as study spaces, a fitness center and retail space at the street level. The units will be leased at below-market costs to assist with the rising cost-of-living infamous in Nashville.

Rent prices for a one-bedroom apartment in Nashville have doubled since 2011, and continue to rise. The neighborhoods surrounding Vanderbilt’s campus have some of the highest housing prices.

Most of the structures located where grad student housing is planned have already been demolished, including Noshville and J&J’s Market and Cafe.

Cuevas’ store and studio moved downtown in 2013, vacating the house on Broadway after 25 years at the location. Since then, the business has relocated to a storefront in Berry Hill.