At a Facilities Review Committee meeting Oct. 31, university officials discussed a proposal for a rainbow crosswalk as a display of support for the LGBTQIA+ community and next steps the university needs to take to possibly implement the idea 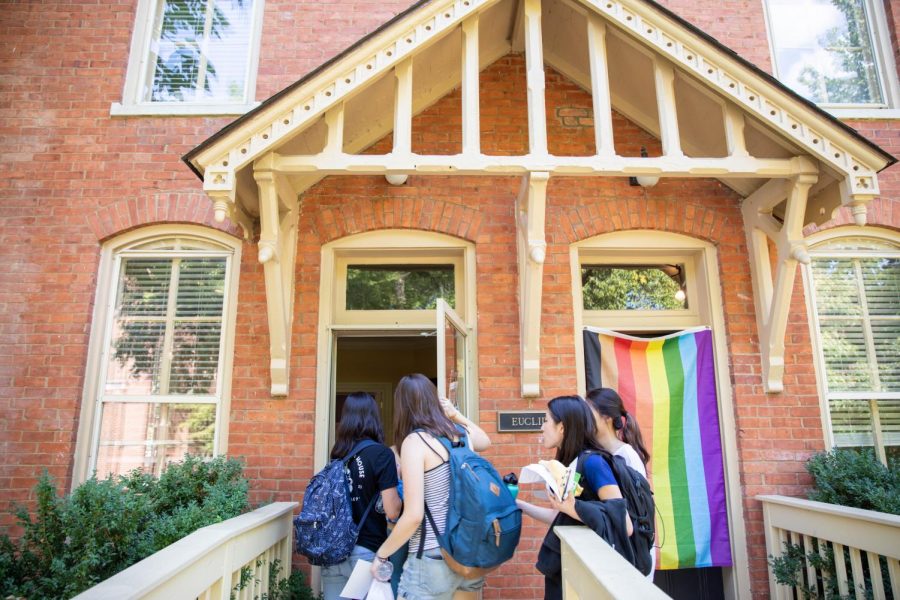 Vanderbilt may soon see a rainbow crosswalk, pedestrian bridge or roundabout circle on campus to demonstrate support for the LGBTQIA+ community.

Assistant Manager in the facilities department Olivia Hill spent the past month garnering support for a rainbow crosswalk at Vanderbilt. Hill has been with Vanderbilt for 24 years and came out as transgender to her coworkers about a year ago. In past weeks, Hill has received about 60 letters in support of her cause from alumni, fellow staff members and current students.

On Oct. 31, the last day of LGBTQIA+ History month, Hill presented her case for a rainbow crosswalk to the Facilities Review Committee, which consists of roughly a dozen leaders from various Vanderbilt departments, and a handful of her supporters who were also in attendance.

“I want something that anybody in the world could see and know that Vanderbilt is inclusive,” Hill told the committee Thursday morning. “Many of you that know me know that I’ve lost everything to get to where I am.”

Hill was proposing a rainbow crosswalk similar to crosswalks that currently exist in Atlanta and Orlando, suggesting the Philadelphia Pride Flag design because it includes black and brown people.

Hill’s presentation listed groups who are in support of her request. The list includes the KC Potter Center, Project Safe, the Women’s Center, the Lambda Association and the Nashville LGBTQIA+ community.

One of the potential locations for the crosswalk suggested by Hill is the crossing between 24th Ave. and Vanderbilt Place near Rand Hall. However, as part of FutureVU, 24th Ave. is becoming a greenway and instead, a roundabout will be installed in front of Rand, for which the concrete will be poured in Jan.

The committee and Hill both expressed support for a rainbow roundabout instead of a crosswalk, but also entertained the possibility of having a rainbow walkway on the main pedestrian bridge on campus instead, although that would be less visible to the rest of Nashville.

Logistical concerns expressed by the Facilities Review Committee included whether to paint the concrete or pour colored concrete, sustainability of the paint or dye, specific design of the crosswalk or roundabout, and whether the proposal will get approved by both Metro Nashville’s codes and other members of Vanderbilt’s administration, particularly the FutureVU hub.

“I personally really support what you do and love that you feel so safe here. The issue is how we go about doing this,” Chief Facilities Officer Mike Perez said. “We are part of a bureaucracy, we have to do our due diligence.”

Bob Grummon, an architect in the Office of Campus Planning and Construction, said that he would handle getting a design for a rainbow roundabout and bring it back to the committee in two weeks. And Erin Hafkenschiel, Executive Director of Mobility and former Metro Nashville employee, said that she thinks they should work with Metro Nashville to try to get a rainbow roundabout approved. However, the project would require a definitive source of funding and the stamp of approval from upper administration including Eric Kopstain, Vice Chancellor of Administration and head of FutureVU.

Supporters sent letters to Hill for her to share with Vanderbilt’s administration. In one letter of support sent to Hill, an alumni from the class of 1966 wrote about attending their first class reunion in 53 years and how struck they were with the increase in diversity on campus, representing a positive change from their time at Vanderbilt in the 1960’s.

“I found the presence of the KC Potter LGBTQI+ Center heartening personally and affirming of that central message of a Rainbow Walk: DIVERSITY in UNITY and UNITY in DIVERSITY,” Jannar Davis (‘66) wrote.

Current students also expressed their support for Hill. Lambda planned a Letter-Writing event for Oct. 29 and a Hustler columnist wrote a story about the history a rainbow crosswalk would make at Vanderbilt.

“Vanderbilt University is dedicated to fostering an inclusive and diverse environment,” Administrative assistant at the Women’s Center Libby Crew wrote in an email to Hill. “This visible statement of that goal will show our fine city how we lead, support and welcome.”