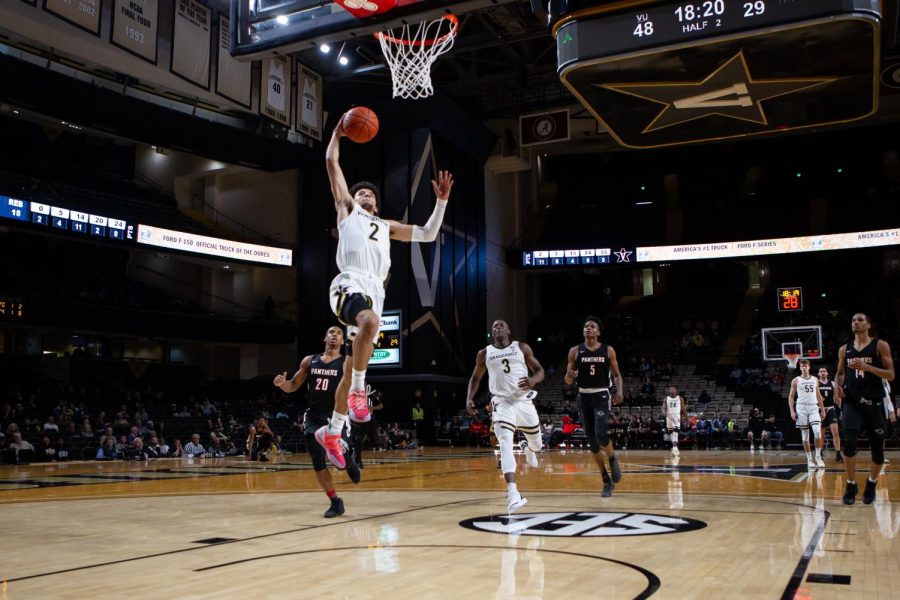 Scotty Pippen, Jr. goes up for a dunk against Clark Atlanta on November 1, 2019.

It was only an exhibition, but for now head coach Jerry Stackhouse and the Vanderbilt Commodores will take a win. After 273 days and counting since their last regular season win, the Commodores put on an impressive showing in their lone dress rehearsal for the 2019-2020 campaign, topping Atlanta Clark 95-55 on Friday night at Memorial Gymnasium.

For newly-hired head man Jerry Stackhouse, it was his first experience coaching a live game at Memorial, and it went exactly as Commodore fans would hope: the Commodores led for all but a little under two minutes of the game, and no one got injured. Stackhouse played all 10 scholarship players who were active. Forward Clevon Brown didn’t play and was listed as day-to-day with a hamstring injury. Stackhouse rolled out a starting lineup of guard Scotty Pippen Jr., guard Maxwell Evans, forward Aaron Nesmith, forward Matthew Moyer and forward Oton Jankovic.

It was a mix of impressive youth flair and steady veteran production for Stackhouse’s Commodores on Friday night. Vanderbilt controlled the game for most of the first half, despite the Clark Atlanta Panthers keeping it close by shooting 50 percent from 3-point range in the opening frame. Coach Stackhouse showed early signs of the coaching savvy that landed him the Vanderbilt job though; the Commodores went on early runs of 9-0 and 15-3, both after media timeouts. They led 45-26 at the conclusion of the first half.

After halftime, Vanderbilt opened up on a 15-4 run and never let the Panthers get within 20 points for the remainder of the night.

Freshman point guard Scotty Pippen Jr. stood out all night with his father, legendary Chicago Bull Scottie Pippen, in attendance. Pippen Jr. controlled the tempo of the offense, made numerous phenomenal passes, threw down a few highlight dunks and was a go-to option on offense when the Commodores needed it. He never forced any plays on offense. He finished the night with 15 points, three rebounds and six assists to just two turnovers. Perhaps more impressively, Pippen Jr. hounded the Clark Atlanta guards all game with four steals and a block. Put simply: Pippen Jr. played beyond his years, which is exactly what Coach Stackhouse is looking for at the point guard position.

“He starts the game for us,” Stackhouse said. “I feel great about what he brings to the table. He just has a natural feel; he’s been playing the position all of his life. He understands he needs to get guys involved, he knows when to pick his spots and is able to go and create for himself. He’s getting better at understanding what he needs to do on the defensive end.”

Fellow freshman Dylan Disu added some quality minutes putting up 10 points on four-for-six shooting, and he flashed an impressive three-point stroke in the process, going two-for-four from beyond the arc. Defensively, Disu put his 6’9″ frame to use, finishing with four blocks and two steals.

“Dylan is a kid that can really shoot the ball, stretch the floor,” Stackhouse said. “Whenever he gets an open look with some separation I want him to shoot the basketball. If you go down the list right now of our best shooters, he’s in the top three. We’re happy to have him back healthy, he has a motor going to the offensive boards. He’s going to be really good for us.”

But for Vanderbilt, it was the usual suspects leading the way in addition to the impressive debuts from the young freshmen. Junior guard Saben Lee led the way with 19 points. Sophomore guard Aaron Nesmith added 17 points and led the team with +32 rating in 27 minutes. Veteran captain Matthew Moyer had 10 points and five rebounds and was the main interior presence for Vanderbilt.

Lee was a surprise non-starter, but his energy was felt as soon as he entered the game for Vanderbilt. He immediately facilitated the transition game for the Commodores and helped the offense outpace Clark Atlanta. He competed with Pippen Jr. in a pseudo-dunk contest throwing down three or four big-time dunks that got the Memorial crowd on their feet.

“He led us in minutes,” Stackhouse said of Lee. “He’s gonna be a high-minutes guy for us. It’s not about who starts; it’s about who finishes for me.”

All four freshmen newcomers played significant minutes Friday night for the Commodores. Forward Oton Jankovic finished with seven points, including a three-point bucket and a dunk. Wing Jordan Wright had four points and threw a sweet lob that Saben Lee caught and finished for a dunk.

Junior guard Maxwell Evans started and was a pest for the Commodores on the defensive end. Redshirt sophomore center Ejike Obinna struggled a bit, fouling out in just eight minutes of play.

“Ej is still getting back into the flow,” Stackhouse said. “From a guy who didn’t play at all last year as a redshirt and didn’t play a lot prior to that, just trying to get him comfortable being on the floor because we’re going to need his size, and I think he can continue to work and get better and help us.”

Overall, it was a solid first showing for the 2019-20 Commodores. The backcourt trio of Pippen Jr., Lee and Nesmith looks to be promising, and Disu, Moyer and Jankovic added in some nice minutes at the forward spots. Coach Stackhouse got his first in-game experience as the Vanderbilt head coach under his belt and the showing was all he could have asked for. Vanderbilt didn’t put too much on tape in terms of their offensive and defensive philosophies, but it was still able to overpower the Panthers with its talent advantage on Friday night, which was expected, but nonetheless good to see following the turbulent 2018-19 season. But if Vanderbilt can build off their outing Friday night, featuring a three-headed monster in the backcourt and sound defense, it shouldn’t have to worry about last season for much longer.