Students gave Late Night Dining an average rating of 3.6/5 stars and seem to be satiated by the ever-expanding after-hours food options, but note that there is room for improvement 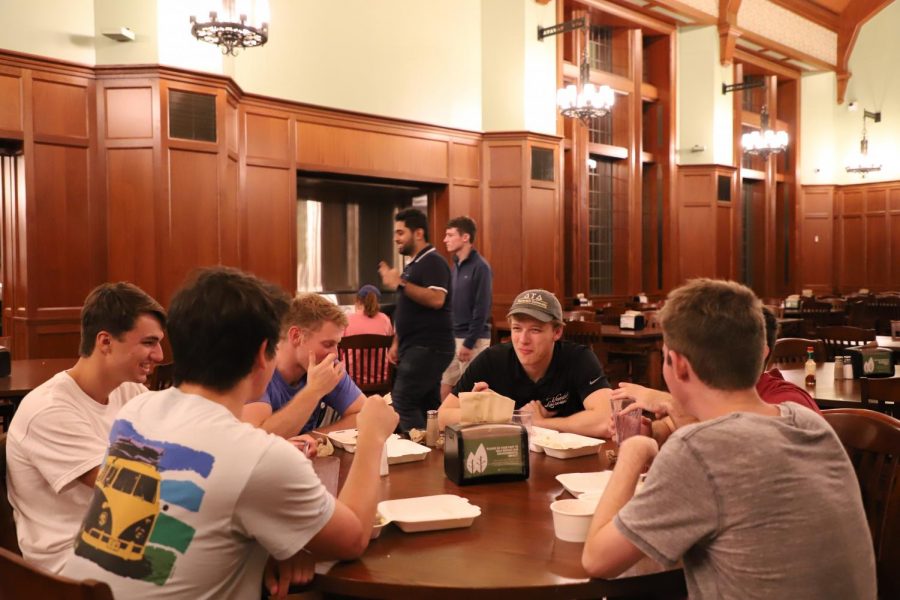 This year’s new Late Night Dining offerings at EBI and Commons are in full swing, feeding the midnight cravings of students from all over campus from 11 p.m. to 2 a.m. on Thursdays, Fridays and Saturdays. The two locations benefit students studying late into the night, returning from after-dark festivities and students who are just on a different schedule from the norm.

Late Night represents a change from last year’s Branscomb Breakfast, which served breakfast foods only in Branscomb from 11 p.m. to 2 a.m. Thursday through Saturday. The year before last, Branscomb Munchie Mart served Chick-Fil-A sandwiches on Saturday nights starting at 11 p.m. as supplies lasted. This year’s Late Night offerings were planned in collaboration with VSG to serve more of campus with two locations and also to represent the university’s values better than the Chick-Fil-A collaboration, according to Campus Dining Director of Operations Jonathan Tyson.

While many students were initially under the impression that Late Night would only be providing breakfast food, new options have been slowly added to the mix. Beginning with a nacho bar, students have gotten a taste of grub ranging from grilled cheese to a pasta bar, and new offerings will be announced on Campus Dining’s Instagram and added to the rotation along with breakfast at both locations, Tyson said. Unlike a typical all-you-care-to-eat EBI meal, Late Night is limited to the entree and three sides or five sides structure of meal swipes at other dining halls.

The Hustler ventured out into Late Night Dining on the weekends of Sept. 20 and 27 to gather thoughts from students at both EBI and Commons who have gotten the opportunity to chow down on some late night eats:
Why are students at Late Night?
“I took a nap and I messed up my sleep schedule so I was hungry,” junior Courtney Conkling said.

“We came here with the express purpose of eating all-you-can-eat. I do wish it was better communicated that EBI was not all-you-can-eat for Late Night — this desecrated EBI’s hallowed halls,” sophomore Hunter Phalen said.

“I eat everything even though it’s bad,” sophomore Gabby Harder said.

“Eggs are watery. If they had omelettes at EBI late night that would hit so different. And strawberries, boy. Hit me with them strawberries. Strawberries and omelettes, like, can everybody agree with that?” sophomore Matthew Lafond-Favieres said.

“The [nacho bar] was great. The sauce…the cheese…the cheese sauce…the queso sauce. The chips were the right amount of salty, and it complimented the cheese. Creamy, very creamy indeed. And the meat to compliment that — it really brings out the flavor in the other two items. A great look for EBI,” sophomore Kevin Day said.

“I could see how it would get old because it’s just what I eat for breakfast anyway. It’s pretty good, it’s not quite life-changing,” first-year Josh Volvracht said.
Opinions on diversifying options?

“[It] was such a depressing day because I was studying for tests,” sophomore Sung Jin Lee said. “And then I find out that Late Night has changed it up and they have multicolored nachos and all of these condiments. I was all for it”

“I was not a fan when they switched to the nachos. I was deeply blind-sided,” sophomore Maya Kumar said.

“If they keep changing up the food, you’ll walk into the hall excited for late night dining, but then decide ‘not today.’ I’d prefer to have consistency,” sophomore Nancy Yuan said.

“I would appreciate an app so that I would know if I were getting breakfast or something else. They closed down the old app. It’s a travesty,” Day said.
How does this year’s Late Night Dining compare to previous years’?
“If you’re coming back from wherever, instead of just going to Munchie and heating it up, you can sit and have a conversation and build community,” junior Syed Rahman said.

“It should really be at Branscomb like it was last year. People are up late on Greek row,” sophomore Mason Brady said. “Plus, if your friends want to go to breakfast but you want something from Munchie Mart – specifically the cookie dough because it slaps – here I’m a sheep and came with the group instead of going to Branscomb,” Brady said.
What about dining hall staff that have to work Late Night?

“It kinda sucks that they have to work till 2 a.m., especially since I see some of them during the day as well,” first-year Justin Holmes said.

“Service is a 5/5, everyone here is lovely and I want to give them all hugs,” sophomore Metra Rastogi said.

“It’s just the beginning…they’re going to keep changing and getting different food. It will be special, you will see,” Commons dining employee Byamungu Shamavu said.
Overall thoughts?
“Food is very important because Vanderbilt’s a very diverse campus, but there’s one thing that everyone at Vanderbilt does: eat,” senior Peyton Brown said.