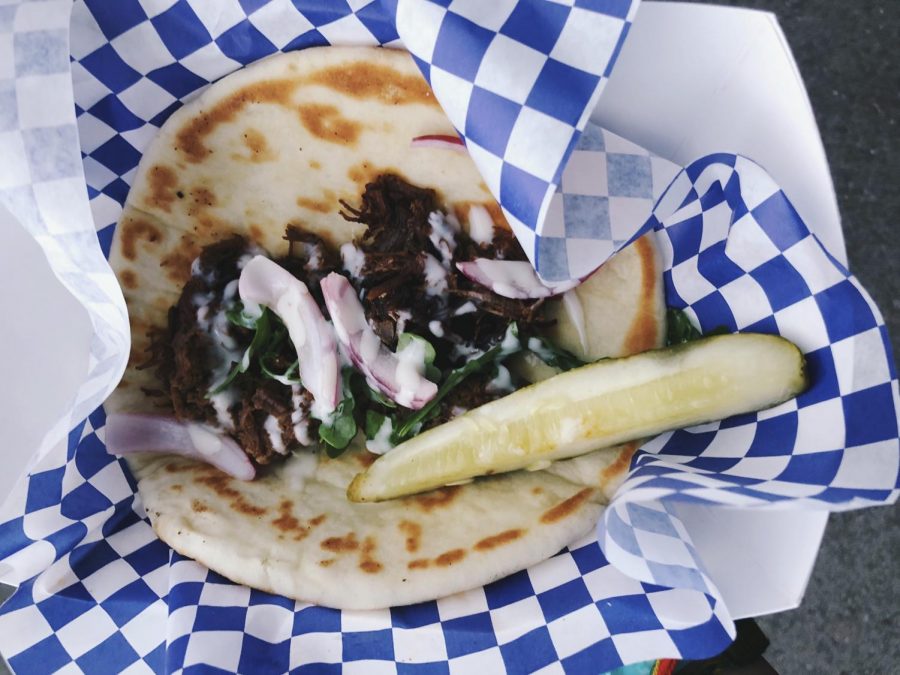 Aryeh’s Food Truck and Taco Mama, located in and around Vanderbilt’s campus respectively, are both businesses that accept the Commodore Card which are being impacted by Nashville’s Roadmap for Reopening.

With the new campus dining limitations this year, the student body has been forced to adapt in the face of adversity and take a closer look at the dining options present around Vanderbilt. As a result, a once-overlooked UFO-looking structure parked between Rand and Branscomb has now become one of those coveted spots to use a meal swipe – the Aryeh’s Kitchen food truck.

Opened two years ago, Aryeh’s Kitchen is a Kosher food truck run by Vanderbilt Chabad that operates Monday through Thursday during lunch and dinner hours (12:00-1:30 p.m. and 5:00-7:30 p.m.) and will soon be expanded to include Sundays. For a meal swipe, you get an entree sandwich with two sides. The refrigerators in Rand and Commons dining halls are also filled with pre-packaged Kosher dishes in grab-and-go fashion, provided by Aryeh’s.

“We want to have Kosher food available at Vanderbilt,” said Vanderbilt Chabad Assistant Rabbi and truck manager Gavriel Isenberg. “That is our biggest thing, to make it as accessible as possible for students who eat exclusively Kosher.”

Around three years ago, a Vanderbilt student in Sigma Nu and his father opened the first iteration of Aryeh’s, and it became a popular lunch option among fraternity brothers and non-Greek-affiliated students alike. It closed after roughly three months, at which point the student donated the truck to the Chabad House, who decided to re-open it for round two a year later. The rabbi and his wife reached out to Isenberg, who created the Aryeh’s students know and love on campus today.

“I love people, and I knew that I wanted to be in a place where I could strengthen Jewish life,” Isenberg said. “This is an incredible way to do that.”

Sophomore Jordan Benmoha, a student employee at Aryeh’s, is living proof of Aryeh’s success in accomplishing that mission thus far.

“You know the computer games like Papa’s Pizzeria? Working for Aryeh’s is just like that, but in real life,” Benmoha said. “I’m getting closer to my heritage, but at the end of the day it’s a job, and it’s a lot of fun.”

Isenberg noted, however, that Aryeh’s is by no means exclusively for Jewish students.

“What is fantastic about Jewish life is that it is not just for Jewish students,” he said. “The vast majority of the people that come to the truck are not Jewish, they just like the food.”

Frequent Aryeh’s customer, sophomore Madison Terrell, is just one of many who can personally attest to this.

“The food is great, but it also allows us to learn about a culture that may not be our own,” Terrell said. “Everyone that runs it is very kind and involved, and I often see them just hanging out outside of the truck, trying to get to know their customers. It really adds to the community and familial aspects of campus life.”

Rabbi Isenberg’s personal favorite menu item – and a best-seller on campus – is the brisket sandwich. Slow-cooked for thirteen hours and served with spicy mayo, it goes without saying that it’s an upgrade from many meal-swipe options around campus. Among other things, the menu features pastrami sandwiches and chicken shawarma. Side options included in the meal swipe include cole slaw, spicy slaw, potato chips, a pickle or bottled water.

At the end of the day, Aryeh’s serves a double purpose: great food and great community on campus.

“We want Aryeh’s to be a meeting place for students regardless of whether they are Jewish. It’s a place for students to come have a warm encounter, meet other people, have good food and expand Jewish life on campus as well,” Isenberg said. “Managing Aryeh’s, giving people a positive point in their day, I’m living the dream.”