Commodore tight end Jared Pinkney was a Preseason All-American. Vanderbilt needs to feed him like one. 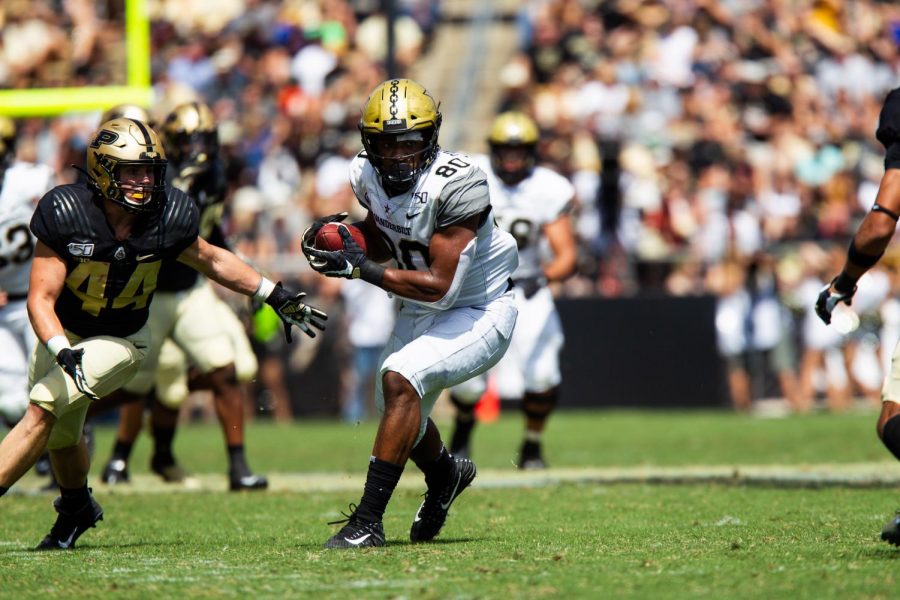 Entering the 2019 season, Vanderbilt’s offense, and frankly, the entire Vanderbilt football team was to be led by “The Big Three:” running back Ke’Shawn Vaughn, wide receiver Kalija Lipscomb and tight end Jared Pinkney.

A third of the way through the season, that has looked more like a “Big Two” than a “Big Three.” Vaughn is the only member of the bunch that has outpaced his numbers through four games from 2018, while Lipscomb’s slight dip in production can be attributed to his low involvement in Week One against Georgia. Since then, he’s averaged nearly seven catches and 87 yards per game and found the end zone twice. Vaughn and Lipscomb are getting their work, as expected.

As of now, Pinkney is on pace for just 30 receptions and 360 yards on the season, numbers more reminiscent of his freshman and sophomore seasons than his monster junior campaign in 2018. Through four games last year, he had 16 catches for 283 yards and a touchdown. He finished the year with 50 catches for 774 yards and seven touchdowns, a record-breaking season that was good enough to give Pinkney serious thoughts about entering the NFL before deciding to return to campus for his senior year.

So what’s the deal with Pinkney? Why is the Vanderbilt offense not using all parts of its “Big Three?”

Talent is certainly not the issue. Pinkney is the same 6’4, 250 pound behemoth of a pass catcher that he was a year ago. He’s currently ranked 22nd overall and is the top-ranked tight end on ESPN Draft Analyst Todd McShay’s board for the 2020 NFL Draft. McShay praised Pinkney this week despite the slow start, featuring him as one of his “sleepers” in the 2020 draft, noting his unique skill set.

“For a guy his size, he can get good separation and catch anything in the neighborhood,” McShay said.

Derek Mason even acknowledged that the Commodores need to get Pinkney more involved in his post game press conference following the win over Northern Illinois.

“He’s given enough of himself in this game to warrant more touches,” Mason said.

That’s the baffling part. If the head coach thinks a player deserves more touches, shouldn’t it be that easy? Put simply: the Commodores inability to push the ball downfield in 2019 has totally hindered his value to the offense. Pinkney is a big play guy; as a tight end, he operates down the seams of the field and is usually looked to when the offense is in need of a first down.

In 2018, he averaged 15.5 yards per catch with Kyle Shurmur under center. But with a new quarterback and offensive coordinator, Pinkney hasn’t seen as much love when it comes to opening up the field vertically. Throwing the ball downfield hasn’t exactly been a strong suit for this year’s starter Riley Neal; he’s averaging just 7.2 passing yards per attempt, which ranks 10th among SEC quarterbacks. But not all the blame can be placed on Neal, either.

Neal has dealt with a number of factors so far that have limited his deep ball abilities, whether it be the snap issues that hurt timing against Georgia or the top-notch secondary he had to face against LSU. Though no one would consider Neal spectacular in terms of his long ball, he has shown the ability to air it out at times this season, namely in the Purdue game, where offensive coordinator Gerry Gdowski actually let him uncork a few bombs.

That game was undoubtedly Neal’s best passing game of the season: he was 24-35 for 378 yards (172 yards better than his next best game this season) and 2 touchdowns. He completed a pass for 49 yards to Lipscomb and found Pinkney for 18 and 17-yard gains in the first half. Unsurprisingly, it was also Pinkney’s best game of the year, as he accumulated 61 yards receiving.

More recently, Pinkney’s line against Northern Illinois was his worse statistical outing of the year. He caught just one ball for one yard and saw just two targets — frustrating numbers to say the least. And these frustrations seemed to boil over on the sideline, where Pinkney was visibly upset, tossing his helmet off and yelling at a member of the coaching staff.

“This isn’t the Jared Pinkney show,” Coach Derek Mason said when pressed on the issue postgame.

But for the offense, and for Vandy as a whole, maybe it should be a little more of the Jared Pinkney show.

It’s no coincidence that the best passing game of the season was the one in which Pinkney had multiple catches downfield, catalyzing the offense and opening lanes on the outside for other receivers. He’s an elite playmaker on the offensive side of the ball and needs to be used as such. This Saturday, it’s time for offensive coordinator Gerry Gdowksi to get him more involved.

Perhaps more play calls looking to get the ball to Pinkney down the seam should be in his agenda. This week’s opponent, Ole Miss, will be keying in on Vaughn and Lipscomb, so why not mix it up and call a couple play actions to Pinkney over the middle?

Last year, Pinkney had six catches for 85 yards against this Ole Miss. The Rebels have given up 29.6 points per game this season, and aren’t especially strong in the secondary. With the offense sputtering, putting up just 10 points over the final three quarters of last week’s slugfest against Northern Illinois, there needs to be some tinkering from Gdowski. Pinkney is simply too talented to not be involved more, especially in an offense that isn’t exactly lighting up the scoreboard like it did last year, when it ranked second in total offense in the SEC.

For the Commodores to be more successful, they need to feature Pinkney, one of the most talented tight ends in the country, more this Saturday and beyond.