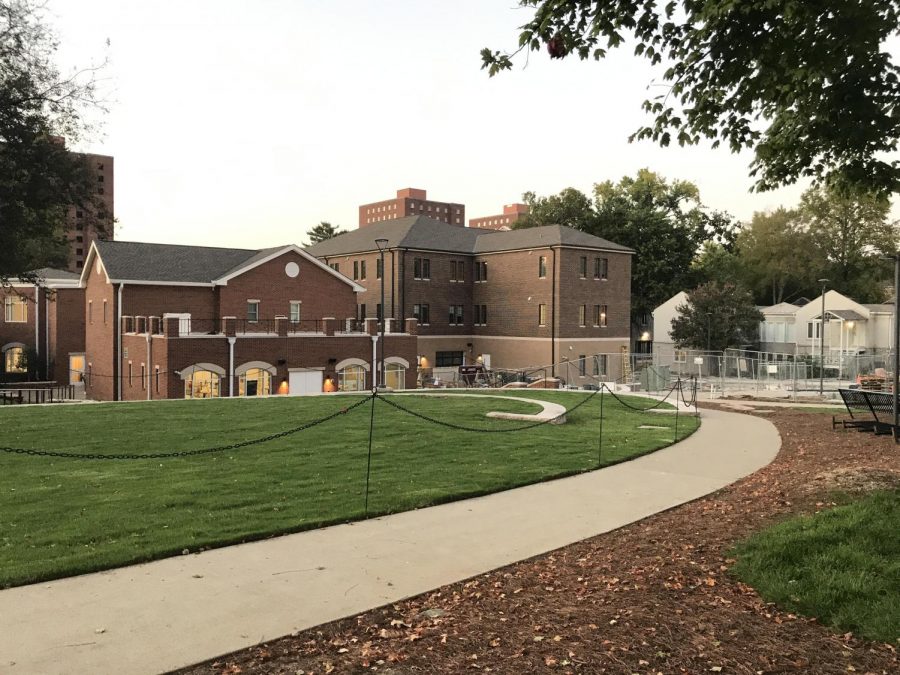 Greek Row is the main hub of Greek life on Vanderbilt’s campus, but has also become a hub of race and class exclusivity. (Hustler Multimedia/Mattigan Kelly)

The reason behind the decline in Greek life’s popularity is unclear but may involve structural and demographic changes at Vanderbilt and in its undergraduate population, according to Torrey, notably that the student body is becoming more diverse.

“While I cannot say for certain why membership in Panhellenic chapters is declining, I think it might be because our students are so thoughtful about where they want to spend their time and their money,” Torrey said in the email. “We also have fewer students who are coming to Vanderbilt with family experiences and expectations related to Greek life.”

In a recent newsletter to members of Greek life, Torrey stated the importance of members of the Greek community meeting the needs of Vanderbilt’s shifting demographic make-up.

“Each year, the students attending Vanderbilt are more academically prepared and diverse than the year before,” Torrey said in the newsletter. “To remain relevant in the student experience, our fraternities and sororities must recognize the need to evolve with a changing student demographic.”

Despite Vanderbilt’s growing diversity among the student body, many students haven’t seen this trend reflected in the Greek population. The Greek Inclusivity Alliance (GIA) is a student organization comprised of students in Greek Life that works to increase cultural competency of the Greek community.

“GIA works under the assumption that we don’t do a good job creating an inclusive, welcoming environment for people that don’t come from the majority background, which includes white and affluent people,” GIA Panhellenic co-chair Rachel Rosenberg said.

Andrew McKinnis, the Communications Chair of Vanderbilt’s Multicultural Leadership Council (MLC), has noticed that when people come into Vanderbilt unfamiliar with Greek life, negative preconceptions may prevent them from pursuing involvement. These preconceptions often prevent students from different backgrounds from joining Greek life. According to Rosenberg, some problems of inclusivity in Greek life stem from implicit bias.

“It’s not that Greek life isn’t catching up at all,” Rosenberg said. “It’s just not happening quickly enough. There’s a lack of knowledge and understanding about how to communicate with people about their culture.”

However, many students are still interested in joining Greek life.

“I’ve always imagined Greek life as being a part of my college experience, maybe because I grew up in the south,” first-year Lauren Maresca said.

Student leaders on the Panhellenic Executive Board are studying factors behind this decline and creating strategies to make Greek Life more appealing to first years. These strategies include increasing financial transparency and creating opportunities for first-years to talk to sorority women before recruitment. Many of these events are based off feedback from a Jan. 2019 survey taken by undergraduate women after participating in recruitment.

“Every year the makeup of the first-year class changes and their interests change, so that’s a reason we’ve tried to adapt how we talk about Greek life,” president of the Panhellenic Executive Board Carter Williams said.

According to Williams, the survey reported that first-years wanted to learn about Greek chapters in an informal setting. To reflect this feedback, the Panhellenic Executive Board has changed the structure of their Meet the Sororities programs, allowing first-years to attend an event where each house displays information about their chapters; in the past, this event only allowed potential new members to talk to current members of each house. Panhellenic holds this event multiple times a semester. The first iteration was Oct. 1.

“Would it be good to have lots of people join our community? Yes, but what’s more important is giving them the best experience and being as honest as possible,” Williams said. “My hope is that through the little changes we’re making this year and in the years to come, maybe people who didn’t know anything about Greek life before would find it more appealing.”

According to Williams, the retention of upperclassmen is a part of the decline in enrollment, often due to the costs of membership. This year, the Panhellenic Council created new rules around financial transparency. On the first day of recruitment, all chapters will be required to discuss costs of membership with potential new members.

Williams emphasized the unique experience provided by joining a Panhellenic chapter in terms of leadership, academic support and a sense of community.

“You’re joining a community that’s larger than just your chapter,” Williams said. “You’re joining an entire Panhellenic Community and our entire Greek Community. That is what it means to be a member, beyond just finding friends.”

“Don’t be afraid to reach out to the different cultural organizations on campus,” McKinnis said. “Talk to a president and share your mission and goals of inclusivity. We want people to believe that this is a welcoming environment. Even if you connect with the smallest cultural organization on campus it could make a huge difference in just having those conversations.”

“I don’t expect to see Greek life’s makeup change that quickly,” Rosenberg said. “In the next ten years, I hope to see some matching of Greek life makeup and Vanderbilt’s overall makeup.”