In 2018, alt-pop artist Christian French opened his first ever concert at The High Watt. He returned Saturday to the same Nashville venue, this time touring his very own EP, “bright side of the moon.” 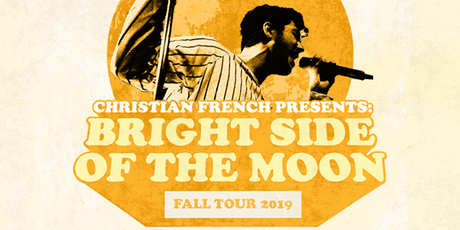 By 7 p.m. on Sept. 21, a line of young Christian French fans stretched down Cannery Row, eager to see the alt-pop singer perform at The High Watt. The night’s show was sold out, packing the intimate venue wall to wall with good vibes.

Two hours earlier, we walked into the urban barroom to meet French himself outside on the porch. The former Indiana University pre-med student-athlete greeted us with a stickered Hydro Flask in hand, dressed in a fun tie-dye shirt that matched his beaded bracelets spelling out “Bright Side” and other mantras. Sitting casually on the cushioned benches, he recounted how much his music career evolved from learning piano on YouTube in the sixth grade. By the end of his freshman year of college, he recorded his first song, “Fall For You,” which landed on Spotify’s United States Viral 50 playlist. He continues to study music theory, but being self-taught in composition has allowed him to color outside of the lines, finding notes and chords that express exactly what he feels rather than following a formula.

Growing up, music was a constant presence in French’s life. His parents loved attending weekly concerts, and his sister even toured with her own band which first exposed French to the realities of the music industry. Midway through his college career, he had to make a difficult decision between his future in music and school when he got the chance to tour with Chelsea Cutler. French says it was his siblings acting as “pioneers for his free soulness” that encouraged him to take a chance on his music, reasoning that he could return to school at any age.

Being on the road with Cutler was a completely new experience for French. Saturday night’s show at The High Watt held special significance to the songwriter, as it was the venue of his first show opening for Cutler in 2018. He credits his producer Dru Decaro, whom he met on the tour, with teaching him how to do “the whole tour thing.” Decaro has been a constant mentor to French since, appearing on every record that he has released since moving to L.A.

French admits that he feels as though he has grown a lot since then.

“Tonight’s a really cool experience just to come back and kind of redeem myself in Nashville,” he said.

Today, his most popular songs on Spotify include hits “By Myself” and “love ride.” The artist has grown to nearly 1.9 million monthly listeners, but his success extends beyond just his career. This first year out of school has given him unprecedented freedom in his intellectual pursuits, allowing him to study his own personal development and beliefs. He cites inspiration from Toltec wisdom, which encourages taking control of your own life and becoming aware of your emotions.

In his free time, French loves to cook. His free-spiritedness is present in the kitchen, and appears to sum up his approach to music, life and his mentality as a whole.

“I don’t ever do recipes,” French said. “I just love throwing a bunch of stuff into a pan and making it work.”

He reflects these values in his newest EP, “bright side of the moon,” taking advantage of subtle metaphors in his music. After this tour, he plans on continuing to write and perform a few more headlining concerts or summer music festivals, focusing on fully taking in his experiences.