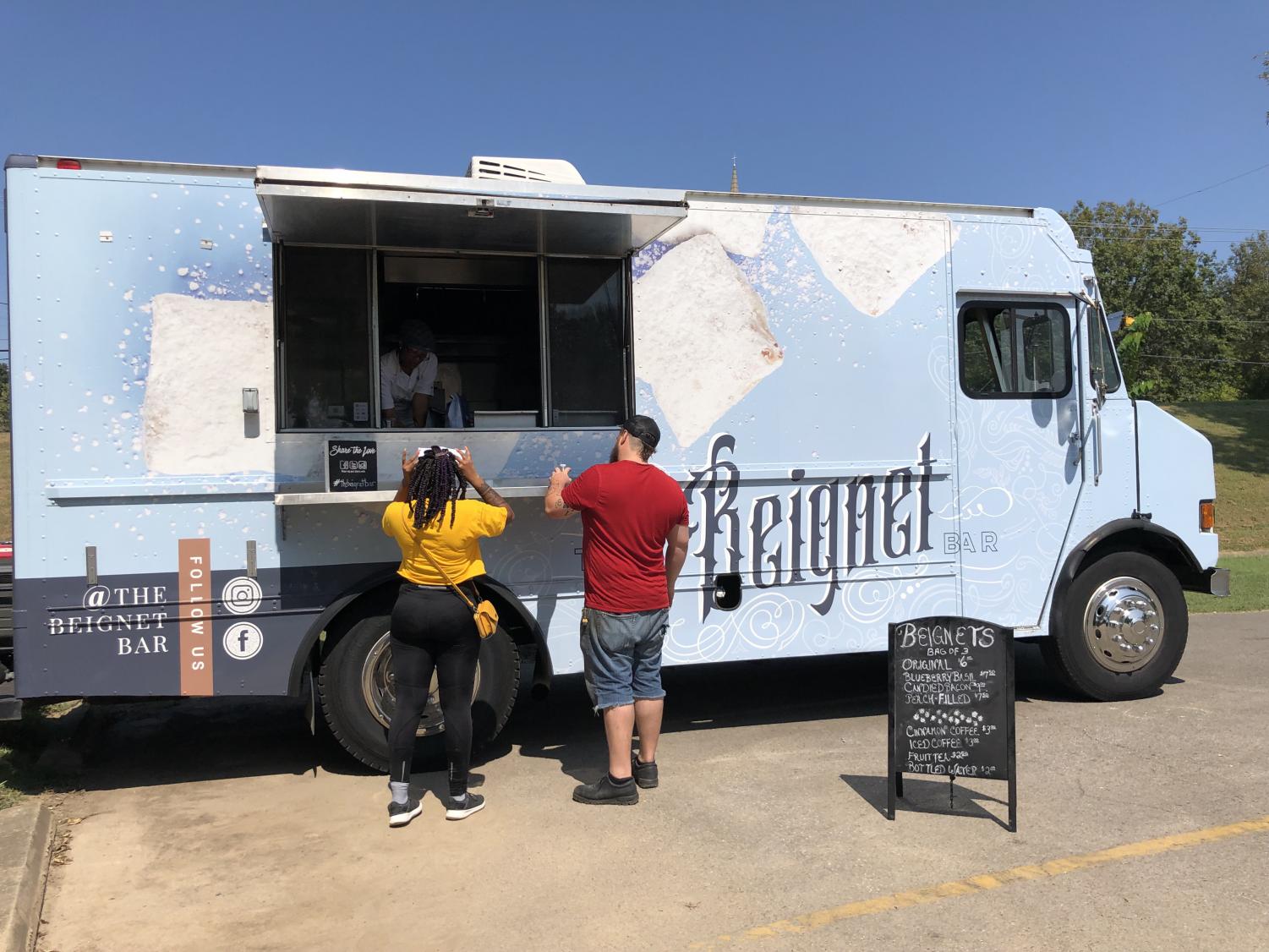 The Beignet Bar brings the taste of Bourbon St. to Nashville

A long wait for a great taste

The Beignet Bar is approaching their one-year anniversary in Nashville serving up homemade Louisiana-style pastries right from their truck. This weekend, the mobile food vendor parked at the Red Caboose Park in Bellevue, so I just had to see what these quirky desserts– including a bacon-coated beignet–were all about.

I was greeted by a smiling, patient woman who let me take my time deciding what flavors I wanted and how many beignets I was going to purchase. There wasn’t a huge selection, but that was understandable given the Beignet Bar doesn’t have a physical storefront. The flavors offered included the original, blueberry basil, candied bacon and peach-filled beignet. Naturally, I had to try a bit of each of them, as I had never had a beignet before. My expectations were definitely high for the blueberry basil; a delicious blueberry compote on the inside of a doughnut-like-pastry sounded like heaven.

The excitement, however, quickly turned into desperation when I had to wait in the 90 degree heat for at least half an hour for the pastries. This was somewhat disappointing, but I wasn’t quite ready to pack up and call it a day. After all, the treats are made fresh from inside a truck, so I couldn’t really blame the people working there.

Once the beignets were ready, I tried the blueberry basil first. This was the only one without powdered sugar on the outside. The blueberry compote was in a separate container on the side, and there was nothing special on the inside of the pastry, either. The emptiness of the beignet surprised and confused me, so after determining it was nothing to rave about I moved on.

Next, I tried the original which was just fried dough completely covered in powdered sugar. It was delicious, simple and reminded me of zeppole, a popular Italian carnival and boardwalk treat back home in New Jersey. I mean, it’s fried dough with sugar on the outside. How could that disappoint?

My sights were then set on the peach-filled beignet, which was prepared how I originally expected the blueberry basil would be. It was by far the biggest of the four beignets, completely covered in powdered sugar and stuffed to the brim with peach filling, so hot it burned my hands. I enjoyed it as much as I could while trying to avoid burning my tongue.

C A N D I E D B A C O N a sweet and savory combination of maple syrup and candied bacon layered on top of the classic beignet. Available this weekend, come have a bite.

Last, I tried the candied bacon, which I was hesitant to try. I have never entirely understood the rage about the combination of bacon and desserts. With that being said, this one was probably the best of the bunch. The lack of powdered sugar left me feeling confident that I didn’t have powder all over my mouth, and I was not burning myself. The honey drizzled on the dough complemented the pastry itself, and there were only two pieces of bacon on top so the contrast in taste was just right.

Overall, I expected the pastries to have the air of a typical doughnut but found them to be much more unique than that. The quirky options ended up being my favorites, even better than the blueberry flavors I typically prefer. The Beignet Bar has developed a cool concept of taking a traditionally regional pastry and inserting it into the growing Nashville food scene, something that I will support even in the blistering heat.