The Vanderbilt Hustler • May 13, 2019 • https://vanderbilthustler.com/2019/05/13/tour-guides-choose-to-forego-compensation-remain-student-organization/

Protests earlier this semester lead to conversations between tour guides and administrators, resulting in tour guides electing to remain a student organization 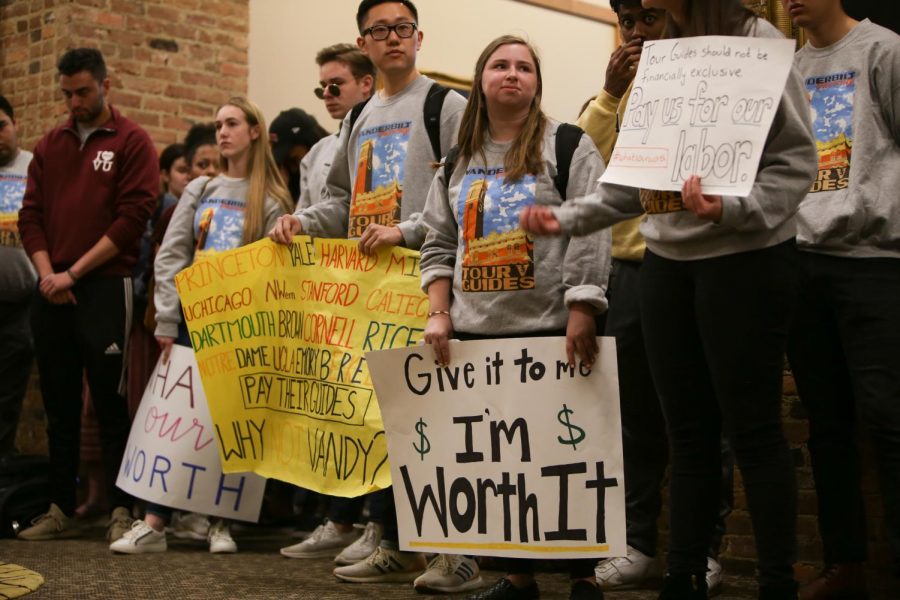 Tour Guides speak with administrators in Kirkland Hall regarding compensation concerns. photo by Sophia She

Following a protest, petition and weeks of conversations with administrators, Vanderbilt Tour Guides decided not to pursue an employment option with the university that would have resulted in financial compensation for guides. Instead, the group will remain a student organization.

“Though we are remaining a student organization, the efforts for compensation were not in vain,” Atlee Witt, incoming Tour Guides president, said. “With the help of alumni and other students, Tour Guides brought important conversations to the table and were presented with an opportunity that not many other organizations get to have.”

The guides first protested for compensation in March, when a group of students demonstrated on Alumni Lawn and brought demands for wages to administrators in Kirkland Hall. In a statement released concurrently with the protest, the Tour Guides Executive Board noted that the service tour guides provide to the university should be met with payment, a practice they said was common at peer institutions.

In conversations that followed the protest, administrators from the Office of Undergraduate Admissions and the tour guides executive board landed on two options for moving forward: remain a student organization without pay, or turn tour guides into employees of the OUA, similar to other student assistant positions in the office.

Ultimately, Witt said the guides voted to remain a student organization without pay. She said some students expressed concern that, under the employment model, they would not be able to meet the possible increased tour requirements.

Still, some of the concerns brought up in the initial protests, such as difficulty motivating guides to stay active and committed to their duties, which guides said pay would address, persist.

“In the student organization model, we will be reevaluating the effectiveness of our organization as a result of these conversations,” Witt said. “We’re aware that we need to rethink our incentive program, maintain student leadership with additional guidance and support from administration, and have increased transparency between OUA staff, the Tour Guide executive board and the organization in full.”

The original protests also focused on financial inclusivity in the organization, citing anecdotes of students who chose not to join Tour Guides or apply for the executive board because they needed to work in a paid position instead. Pay was needed, they said, to help make the organization more financially inclusive and keep students with financial need from burning out.

However, Doug Christiansen, Dean of Admissions, said that student data shows tour guides demonstrate similar financial need to the rest of the student body. Witt said administrators made the executive board aware of this and that moving forward, tour guides will be continuing to find ways to address financial inclusivity while remaining a student organization.

While concrete organizational changes have not yet been made, both the guides and the administration plan to continue conversations to help address ongoing concerns, including the administrative burden that guides sometimes take on and what the guides characterize as an insufficient incentive structure.

“The discussions we have had and will continue into the future with the current Executive Board have been very positive and fruitful,” Christiansen said. “The Office of Undergraduate Admissions is very grateful for the interactions. We simply have learned a great deal from both the current as well as the past Executive Boards. I also believe the tour guide leadership have learned from us as together we have found a solution forward.”