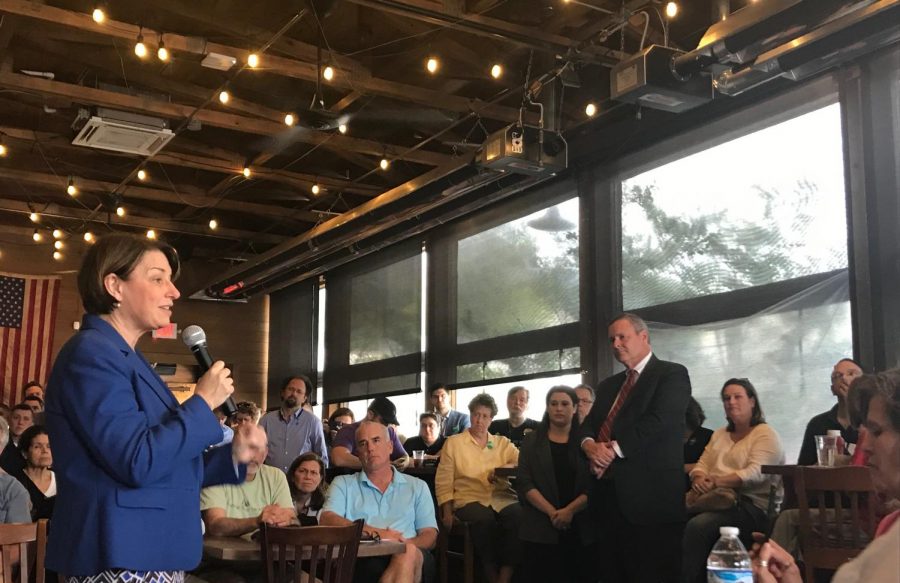 A number of Vanderbilt students attended the event with the presidential candidate. (Photo by Eva Durchholz)

As part of her Democratic presidential campaign Amy for America, Senator Amy Klobuchar hosted a lunchtime meet and greet at Edley’s Barbecue in East Nashville Wednesday April 17. The Senator from Minnesota told stories and shared her moderate Democratic platform with a room of about 100 supporters, emphasizing her humble roots as the daughter of a schoolteacher and a newspaperman.

During her talk, Klobuchar stressed the importance of improving infrastructure, lowering prescription drug prices, tackling climate change and raising corporate tax rates. Since becoming a Senator in 2007, Klobuchar has introduced and passed 33 laws, including legislation to improve water infrastructure and enact environmental protections.

Klobuchar has been labelled by Vanderbilt co-led Center for Effective Lawmaking as the most effective Democratic Senator in the 115th Congress and was the first woman ever elected to the U.S. Senate from Minnesota.

As of April 17 2019, Klobuchar is ranked 8th among the potential Democratic candidates, polling at 1.8 percent for the Democratic nomination according to poll averages. At this point in the 2016 elections, however, Jeb Bush was the leading Republican candidate and Donald Trump had not yet entered the race.

“She’s a really personable person and has some concrete policy ideas but I don’t think she’s a star presidential candidate at all,” said fourth-year Gwen Ranninger. “But the event itself was really cool, it was the first time I’ve ever been to something like that. Hearing someone say ‘and that’s why I’m running for president’ kind of gave me chills.”

Klobuchar emphasized bipartisanship and shared a quote from Senator John McCain from a personal encounter a few months before his death. “There is nothing more liberating than fighting for something larger than yourself,” Klobuchar said.

Klobuchar has been criticized about her lack of attention given to racial issues before. Coincidentally, the crowd at Edley’s was almost entirely white.