VSG passes resolution calling for Calhoun Hall to be renamed 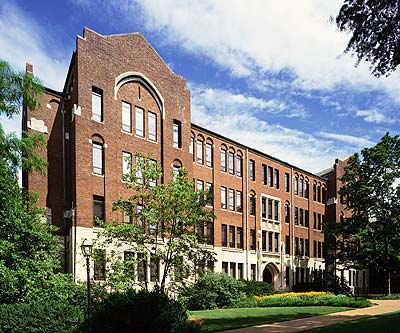 On Wednesday April 3rd, the Vanderbilt Student Government Undergraduate Senate unanimously passed a resolution calling for Calhoun Hall and other campus buildings to be renamed. The resolution also advocates for the creation of a university task force to evaluate all building names and symbols for their congruence with the university’s commitment to diversity and inclusion. Student Body President Tariq Issa and East/Memorial House Senator Hannah Bruns proposed the resolution.

Calhoun Hall, which houses the Economics, Managerial Studies, and History departments and the Center for Medicine, Health, and Society, is named after William Henry Calhoun, Nashville silversmith and jeweler who supported the Confederate States of America and owned slaves. Calhoun died in 1865, and his daughter Mary Ella Calhoun Foote left her estate to Vanderbilt University for the construction of Calhoun Hall in 1918. The building was completed in 1928.

Bruns learned about the problematic names of university buildings at Hidden Dores’ #TUNNEL event, an interactive experience designed to teach Vanderbilt students about the experiences of marginalized student communities held on Feb. 9. Determined to address the issue, Bruns asked Speaker of the Senate Sean Swinford about writing a bill who told Bruns that Issa had had the same idea, according to Bruns.

Bruns and Issa began writing a resolution calling for the name changes in mid-March. Bruns said that she realized that renaming these buildings could be a long process.

“This bill was meant to start that process,” Bruns said. “2023 is Vanderbilt’s 150th anniversary, and my goal is that that year we unveil the renaming of all these buildings that currently have problematic names.”

“Doing that freshman year showed me that these are pretty attainable goals, and the timeline can be pretty quick,” Haygood said. “Renaming Calhoun as a specific item is very attainable.”

To rename Confederate Memorial Hall, the university returned the donation of the Tennessee Division of the United Daughters of the Confederacy at its present value of $1.2 million from the $50,000 original gift. The funding came from anonymous gifts by donors solely for the purpose of repaying the donation.

Hank Senator Rob Lusk, a co-sponsor of the resolution, said that the difficult part of renaming Calhoun Hall would be finding the funds to return the Calhoun family’s donation to the university.

“That’s the big question that VSG doesn’t know the answer to,” Lusk said. “Where do you get that money?”

Haygood said that Vanderbilt should find the money to rename Calhoun and other buildings with problematic names.

“This is not an issue that should be ignored just because of funding” Haygood said.

In addition to Calhoun Hall, Bruns said that McTyeire International House and Garland Hall should also be considered for renaming. McTyeire is named after Methodist Bishop Holland N. McTyeire, who was crucial in establishing the university and served as the first president of the Vanderbilt University Board of Trust. McTyeire was distantly related to Cornelius Vanderbilt, and expressed support of slavery in his essays.

Garland Hall is named after the university’s first chancellor, Landon C. Garland. Garland is said to have owned up to 60 slaves before the Civil War. There is also a Garland Hall at the University of Alabama, as Garland served as its president for a decade before founding Vanderbilt University with McTyeire and Vanderbilt.

The VSG resolution references Yale University’s 2017 decision to rename its Calhoun College, which was named after US Vice President and slavery advocate John C. Calhoun. This decision came after months of campus protests. William Henry Calhoun and John C. Calhoun were not related.

Bruns spoke about the prevalence of buildings with problematic names as a result of the south’s history and Vanderbilt’s role in the region.

“I think this is a really good way for Vanderbilt to be a leader, especially among southern universities,” Bruns said.