While Dr. Bethann McLaughlin's future at Vanderbilt remains unclear, students continue to show their support for her 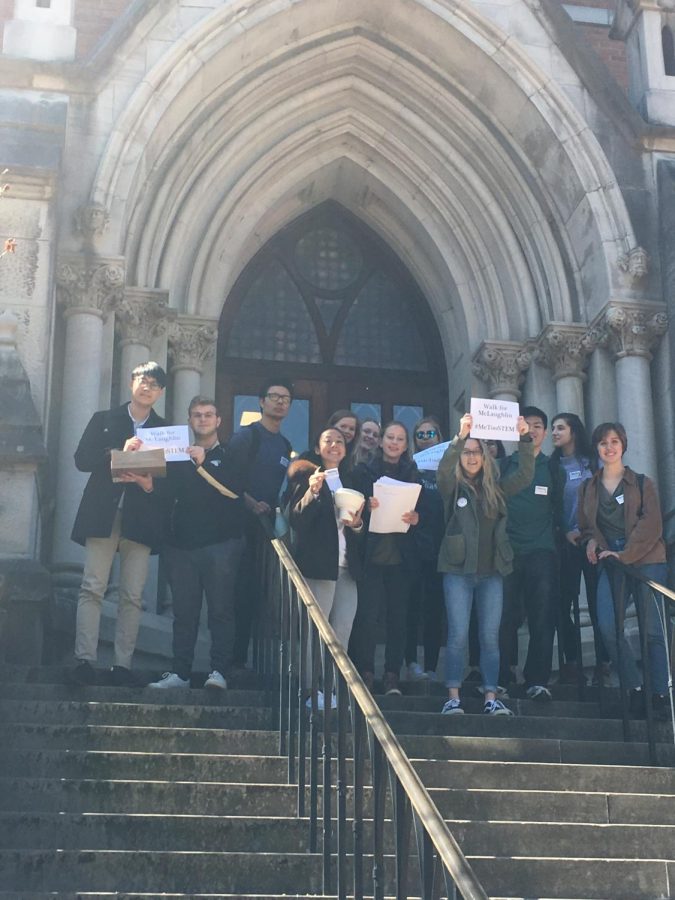 Students gather outside of Kirkland Hall, before delivering petitions in support of Dr. Bethann McLaughlin to administration

A group of 20 students gathered at the Rand Wall Tuesday afternoon to pressure the university to reconsider Vanderbilt School of Medicine professor Bethann McLaughlin’s tenure status. The students carried simple printed signs and a print out of a change.org petition with over 11,000 signatures urging the university to reconsider the decision to reverse the tenure decision.

The group of students then marched to Kirkland Hall, chanting and waving their signs. Inside Kirkland, they were greeted by Vanderbilt administrators Cynthia Cyrus and Melissa Thomas-Hunt, who accepted their stack of petitions.

The march to Kirkland was organized by senior Dominique Szymkiewicz, who has been a student of Dr. McLaughlin’s for four years. She said she has confidence that the university will respond to the petitions.

“As a woman, I have a lot of passion for what she’s standing up for and what she’s been talking about and it’s definitely something that needs to change,” Szymkiewicz said.

McLaughlin, who founded the #MeTooSTEM movement, has been facing an ongoing tenure battle with the university since she first applied in 2015, only to have her process stopped as she was involved in various Title IX investigations. She was approved for tenure by the tenure board in 2017, but her full appointment was frozen during another investigation, after which Jeffrey Balser, Dean of the medical school, asked the tenure board to reconsider. At that time, the board chose to reverse the approval and deny McLaughlin’s tenure.

After the reversal, McLaughlin took her case to a faculty grievance committee, believing the reversal of her tenure decision was a retaliatory act by the university for her role as a witness in a Title IX investigation involving a colleague and her social media activity. In a Feb. 12 report, the committee decided to uphold the decision to deny tenure. However, there is still a chance that McLaughlin could have the decision reversed, if Chancellor Nicholas Zeppos chooses to step in.

This demonstration was the second time students brought their concerns with McLaughlin’s tenure status to the Chancellor’s office. In late February, a group of students staged a sit-in in Kirkland for nearly two hours. During both events, the university administrators present said that while they could not comment on McLaughlin specifically, they were proud of the student efforts to organize. In Monday’s conversations with the protestors, administration cited the work they had done and are continuing to do with the National Academy of the Sciences in bringing conversations about sexual harassment to faculty campus. They also mentioned the Provost’s Steering Committee for Initiatives Focusing on the Status of Women and their ongoing conversations with Vanderbilt Student Government around campus climate towards harassment and misconduct.